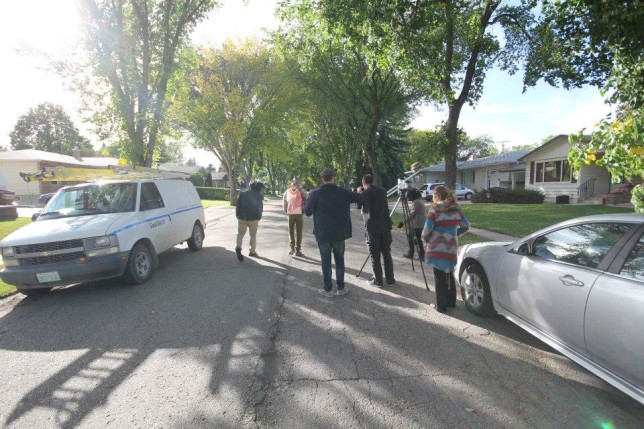 Angie Wangler is a writer, blogger, actor and producer based out of Regina SK, and New York. She has worked with Crushed Rockets Motion Pictures since 2013. The Nightrunner, a film which Angie is Associate Producing and Art Directing, is currently being crowdfunded on Seed&Spark.

When you live in any community as an artist, it is only natural to support other artists within that community, promote growth, and create a local scene that, hopefully, can share that art with people everywhere. But this can be difficult when you are a filmmaker living in a province that has taken away your tax credit, causing any community making films here to move elsewhere. Welcome to Regina, Canada.

We, myself and the power duo Sherona and Aaron Sinclair, who make up Crushed Rockets Motion Pictures, could have picked up and moved when everyone else did. But these are our streets, our community, and here is a beautiful landscape that lends itself to storytelling. So we tweaked our perception a bit: We started to reach out beyond the arts community. We quickly found that the people of Regina really do want film to exist here and will support you to make that happen. We found people outside of the film industry that want to be a part of movie-making magic.

When we watch this film on the big screen, we’ll be thinking to ourselves, “Cool! That’s right by my house.”

When we decided to make The Nightrunner, we knew that New Jersey was on our list of film locations. We also knew that if we were really going to continue to live in the place we call home and be vocal about being the filmmakers we are from the prairies, shooting part of this film would need to happen on our own streets. The response was, and is, overwhelming when we share what we’re doing with the people of our city. They want us to succeed, they want to go see The Nightrunner and say, “Hey, that’s right by my house!” and they want movies to be made here. This attitude and incredibly supportive arms like Seed&Spark make us push harder.

Now, it would be nice to think that maybe this excitement, drive and support could reach the people who make the rules, and that would cause them to give us back our tax credit and reopen our incredible local sound stage (that sits, just longing to be shot in). But we have decided not to dwell on that. We’ve decided that we will make a movie here, that the people of our city are behind us and will help in any way they can, and that if we really want to use that sound stage, we will figure out a way to do so. It’s all about the changing your perception, sharing that energy with people, and talking about where we’re from and what we’re doing with as many radio waves and TV stations that will have us.

Because at the end of the day, the three of us love being filmmakers and nothing is going to stop us from doing what we do best. We get excited location scouting in our own backyard, knowing that when we watch this film on the big screen, we’ll be thinking to ourselves, “Cool! That’s right by my house.”