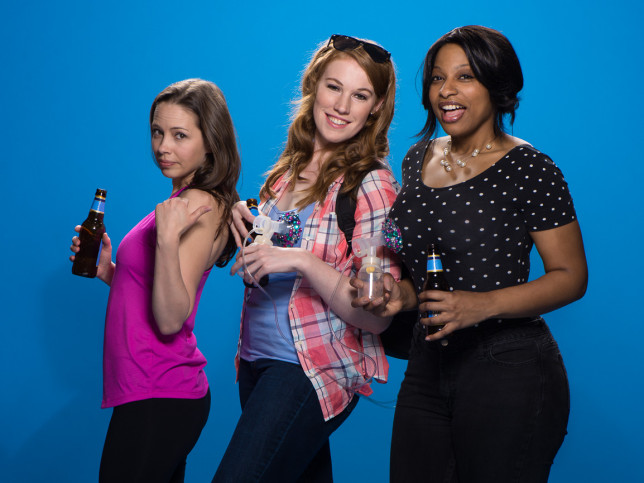 Filmmaker Kate Barton is making her directorial debut with Pumped & Dumped, which is currently being funded on Seed&Spark.

“Your movie will tell you when it wants to be made,” my beloved director friend, Dan Steadman, said over drinks one afternoon. At the time, his words were difficult for me to stomach, but that could’ve been because I’m not a vodka person.

We were discussing the recent launch of the crowdfunding campaign for my first feature film, a comedy called Pumped & Dumped, about a young woman attempting to pursue her “pre-baby” dreams by forming a stand-up comedy mom band with her best friend. Dan, a seasoned writer/director from LA who had worked with A-listers like Melissa McCarthy and Octavia Spencer, had never tackled the crowdfunding beast. And inadvertently, he reminded me of my former OB-GYN. (“Your baby will tell you when he wants to come out.”)

For obvious reasons, I didn’t understand how a project could dictate its own timeline. Not to mention, the crowdfunding ball was already rolling. Of course, I knew there would be challenges that would test my endurance and commitment to the project as the writer/director/executive producer, but certainly if I pushed hard enough, a perfectly healthy, slightly gooey film would pop out eventually—funding be damned.

Maybe crowdfunding was turning me into someone I didn’t know. Maybe I was a stripper on the brink.

My early success in crowdfunding came from a problem-solving method I developed called “Tiny Fires.” The “Tiny Fires” method looks to solve the next most immediate problem of the minute/hour/day/week, never looking ahead until that problem is solved. Otherwise, if you look too far down the line, it will look like the whole fucking forest is burning down. The payoff comes at the end when you look behind you and see the blazing trail of progress you’ve made.

On those first few days out of the gate, I was stomping fires and taking names. I knew my target audience. Hell, I was my target audience! Young mothers, women in the process of navigating their dreams with their responsibilities as a parent—those were my people! Mommies were coming out of the woodwork to tell me how proud they were of me for what I was doing. If you get even one or two people who can do that for you, bottle their words and carry those words around with you.

Two hard weeks later of pushing my campaign, I began to feel the effects of the slow burn out. I was working a full-time job in addition to crowdfunding (if you can avoid doing both, I would recommend it), attempting to parent in between, sleeping less, and on most days my phone was dead by 11am. (HUGE apologies to my man who was basically coming in fifth on the list, right under maintaining basic hygiene.) The only quality time I got to spend with my son was when I’d take extended bathroom breaks, and he’d sit on my lap watching YouTube.

What I considered pushing myself full-force in the direction of my dreams was really a gradual decline into self-induced stupidity. My brain was becoming so full of to-dos that I started speaking in half thoughts, trailing off mid-sentence before I’d move on to half discuss another tidbit, and forgetting more or less everything that didn’t fall under the umbrella of my campaign. One day, I literally thought myself through a stoplight, and I was walking. 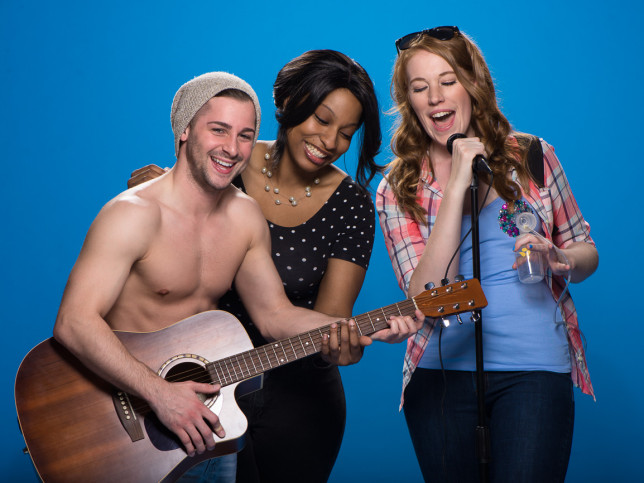 The Band. Jeremy Schlosser as Kyle the shirtless guitar-playing manny, and Jeanitta Perkins and Kate Barton as the Pumped & Dumped duo.

The “Ugly Truth” hit me on week four as I looked over my list of contributors: My viewing audience was NOT going to be the same as my funding audience. (I should’ve known better. They were MY people, and I was the one asking for money.) Furthermore, the content of my film, which I summarized as “raunchy mom humor,” limited me on certain fronts for potential investors. I changed course, seeking out corporate sponsorships and private investments.

Within a few days I had a lead on a $10,000 private investor interested in my campaign, and literally the day before we were supposed to meet, the Nepal earthquake happened. My anonymous philanthropist, more generous and courageous than I’ll ever be, took his money and himself to Nepal to aid in the relief efforts. (I imagine him fleeing at a moment’s notice on a private jet.) Obviously, Nepal is a far more worthy cause than a movie, and I supported him wholeheartedly. (You find that so many of those “more worthy”/humanitarian causes pop up on your newsfeed after you start a crowdfunding campaign.)

Admittedly, I also thought of all the shitty causes people put money towards that do exponentially well, like the “We Won’t Bring Pizza To Your Gay Wedding” campaign that grossed at least three times the amount of my crowdfunding goal. (For the record, I’d totally bring pizza to your gay wedding.)

My Eastern European mother-in-law was growing increasingly concerned with my fixation on raising money and sat me down for a stern lecture on not performing a striptease in a bar. She told me a story of her days in the old country, when she had “sex appeal” (her words, not mine). Long story short, a Turkish man approached her on a topless beach and asked her to go to bed with him for a certain dollar amount, and she refused. The Turkish man left her with the ominous words, “Everyone has their price.”

After the story, I promised her I would rethink how to fund my film—even though stripping was never a viable fundraising option. Maybe she saw something in me I didn’t see. Maybe crowdfunding was turning me into someone I didn’t know. Maybe I was a stripper on the brink.

Worst case scenario: I’m knocked up with my amazing film for a little longer.