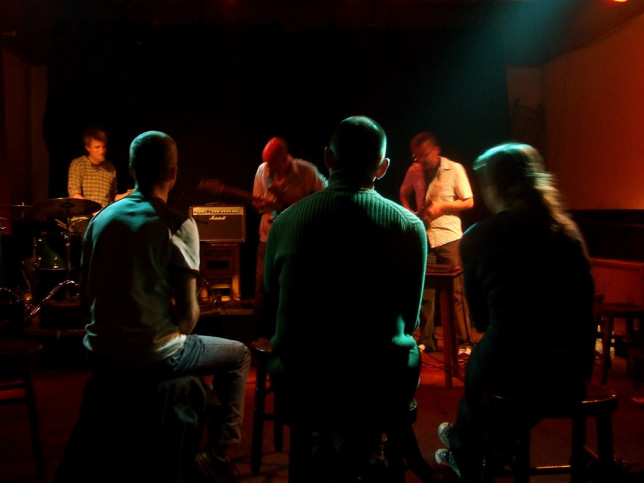 As a musician who depends on performing as my primary source of income, I play a lot of shows. Rock club shows, happy hour acoustic gigs, house concerts, music festivals, you name it, but mostly I play rock clubs. I’ve noticed recently that several big name acts like Jack White and the Yeah Yeah Yeahs have tried to introduce a certain type of etiquette at their concerts—namely, the banning of cell phone video and photography.

I know we’re in an intimate venue, but let’s try and maintain a modicum of professional courtesy, okay?

The pros and cons of this idea have been discussed at length elsewhere, and it is not my intent to write about whether or not it’s a good idea. I will say that for up-and-coming bands playing in small clubs, cell phone vids and photos are great free publicity; we need all the help we can get. Club audiences taking video, hashtagging a band’s name and then putting it on Twitter and Instagram is 21st century word of mouth, and word of mouth is the best publicity there is. However, the discussion got me thinking about other types of behavior at small club shows that people like Jack White don’t have to deal with. Behavior that, however harmless or well intentioned, ends up degrading the club show experience, both for the audience and the performer.

Make no mistake—performers are very grateful to have an audience. You could have done something else with your time and money, and you chose to spend it with us. That being said, there are loads of articles telling bands how to put on a better show, and comparatively little about how to be a better audience. Here’s a few types of behavior I’ve noticed that I’d like to point out, behavior that, kept to a minimum, could improve the experience for everybody.

Unless you’re watching a cover band (and sometimes even if you are), don’t request songs.

Suss the situation before you yell, “Do you know any Tom Petty?” or scream, “Freebird!” If you’re at a rock club watching bands play original music, chances are they won’t know any of the songs you request—they were too busy writing songs and developing their sound to be bothered with learning covers. Even if they do, they probably don’t want to play them—they’re there to play the songs they wrote, and they hope their songs reach an appreciative audience. Shouting out requests is not being an appreciative audience.

Don’t walk up to the stage and attempt to carry on a conversation with the band.

I know we’re in an intimate venue, but let’s try and maintain a modicum of professional courtesy, okay? People have walked up to the stage and told me how much they love the show, and then tell me about their music, their cousin who plays guitar, etc., in the middle of the set. Meanwhile, the rest of the audience is just standing there, waiting for this guy to finish talking to me so I can continue playing music. I typically ignore people who do this and just keep playing, but it’s still disruptive, and anyway it feels rude to ignore people. Don’t put the performer in that position. Don’t be that guy.

Don’t ask to sit in with the band.

Don’t buy shots for the band.

This is controversial I know, but hear me out. Other performers might vehemently disagree with me, but it’s like this: I like a shot of whiskey as much as the next guy, but if I drank all the shots that get lined up on stage sometimes, I wouldn’t be able to stand, much less play. Secondly, at most club shows (not all), the performer usually has some kind of discount or comp drink deal, so buying the performer a shot is kind of redundant. But thank you for your generosity! If you’re itching to show support and spend money on the band, buy their merch—it puts gas in the van and gets them to the next show. Honestly, the last thing most performers need (myself included) is more free booze. Again, other performers may disagree with this, and that’s okay; admittedly this is an opinion, but in the event that some other performers agree with this, I felt it needed to be said.

I’m not trying to scold anyone; I’m an audience member almost as often as I am a performer, and I admit to doing all these these things at some point in my club-hopping life. However, I’ve been on both sides of the stage for years now, and I’m starting to figure out what works and what doesn’t. Just a few things to think about.