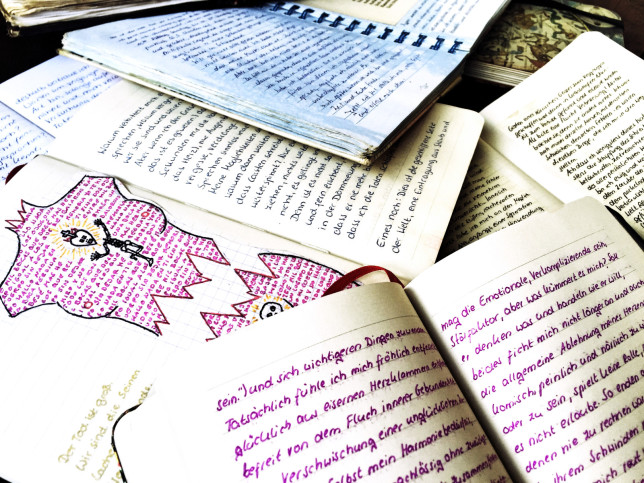 There is a famous rule stating that you should write what you know. But I find something else far more important: Write what you love. It seems kind of obvious now, but for a long time it wasn’t. Maybe it’s because it took me quite a while to even try and become a professional writer. Years and years I had been writing only for myself, never brave enough to show my work to someone else. That changed when I started dating a filmmaker who convinced me to let him read some of my stuff and then texted me a sentence that would change my life: It is your duty as an artist to enrich us all with what you write.

Both filmmaker and sentence stuck with me, and soon I began sending some of my stuff to competitions and literary magazines, an endeavor that quickly yielded surprisingly good results. It seemed that my writing was indeed good enough to be shown. All that was missing to finally make me feel like I could call myself a writer was, well, making money with it. So when, thanks to some very nice people, I was offered a job of writing a short erotic novel for an existing series of e-books, I was quite excited. I took the offer thinking that this was what I wanted: Being paid for written words. I could not have been more wrong.

I’m much more happy writing only what I love and earning my money by other means.

Although it started out being fun, it quickly changed to something that more resembled a hated chore than a great opportunity to generate income. It wasn’t that the novel was a bad thing to write in general. It just was for me. It was so different from my usual style that it was impossible to achieve any kind of flow, I couldn’t identify with the characters or with the way they had to be written. And when I compared my compensation to what I usually charge for a day of work as a freelance reporter, it made me feel miserable that I had gotten myself into this. But the worst thing was that because of the many hours I had to put into planning and writing, all while maintaining my day job, I never had enough time, energy or creativity left to work on my own stuff. So I procrastinated as long as I could and finally finished the novel just before deadline without even being able to give it a work-over. I was painfully aware that it wasn’t nearly as good as I had hoped it would be when I took the job. Let’s call a spade a spade: I botched it. Completely.

So it didn’t really come as a surprise when they didn’t ask me to write a second novel for them. Again, it wasn’t my best work, far from it. I knew that and felt guilty, knowing that a friend had put in a good word for me and that I could have tried harder, if not for myself than at least as a courtesy to her. I still feel that way, shameful and (unrightfully) somewhat hurt, but since then I also realized that no matter from which direction I had approached that project, it would never have turned out really good. Because when it comes to my passion, I’m just not able to compromise: I only can tell what I want to tell and tell it just the way I tell it. Everything else is just not doing it. Not for me and certainly not for those who read it.

Obviously, as a creative person you should be open to criticism. If you ask me, a lot of famous filmmakers made better movies when they still had people who told them to just cut it. So when I say that I’m not able to compromise, I don’t mean that I am generally unwilling to change or to listen to editors and readers, but that I find it taxing to write about something I don’t care for or in a way that feels forced.

This is not worship of art over entertainment, mind you. I enjoy the poetry of Michel Houellebecq as much as I do the Sookie Stackhouse novels. But when it comes to writing, I can only work on things I truly identify with. That is partly because as much as I love having written something, the process itself is nothing that I like very much, quite the opposite, so wasting what little patience I have on stuff I don’t like feels extra dumb. But it is also because writing for me means having my own images and ideas for any given project, a vision if you want, and ignoring it for the sake of money makes me angry and sad and a bad writer.

I’m not alone in this. I have a friend who is an aspiring screenwriter. He recently got an offer doing a promotional film for a medium-sized company. So he artfully crafted a story, including a story arc, a subtext and relatable motivations, convinced that the best way to sell your product is via creative storytelling. His employer would have none of that. All the suits wanted was bunch of standard videos, nothing more. It made my friend mad. Really, really mad. He got so frustrated that the whole time he worked on the job he was in the foulest mood possible, bordering on the severe depressive. Not because he felt critiqued but because he wanted to do the best movie he could think of and felt they didn’t even want to try.

Of course, I also have friends who happily lend out their pen for paid work they don’t especially like or would never do just for fun. In a way I admire their ability to detach from their passion and just get the job done. But I’m much more happy writing only what I love and earning my money by other means. I am lucky in that I have a job that still touches on the basic themes of storytelling while being so different from fictional writing that I never feel frustrated by it being silly or stupid at times. Being a TV reporter is my blissful middle ground, my carte blanche for never having to compromise when it comes to writing. It also pays a lot more than standardized novels, so there’s that.

I still write for money but only if I really like the project or platform. And of course I haven’t given up on the dream of one day getting enough revenue from writing to quit my job as reporter. But if that day comes I want it to be because of work I love to do and not just another variation of content on demand. Why else change professions at all?

Myriam Klatt is a writer from Berlin, Germany. Her short stories have been published in different literary magazines and she is currently working on her first novel. She also works as a freelance TV-Reporter, which allows her to pay rent and travel the world. She enjoys coffee, books and meeting new people.

View all posts by Myriam Klatt →