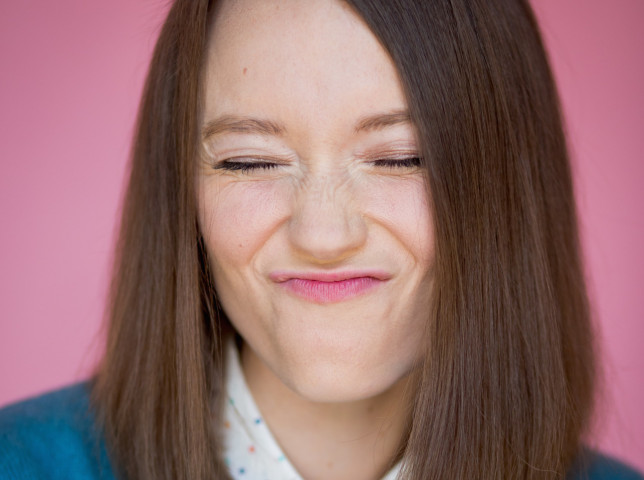 For years, I’ve tried to grasp that elusive feeling of audition satisfaction.

Just before an audition, you are crammed in a hole in the wall with several other humans who probably look and are dressed just like you. You can hear the audition of those who go before you; you can hear the conversation and at some point you might wonder, “What the hell are they laughing about in there?”

The door opens, some babe walks out (is she local?) and more laughter and the echoes of laughter trail behind as she checks off the “Seen?” box on the sign-in sheet and floats out of the office. Beautiful fairy girl leaves, you feel like shit, you go into your audition still distracted, you notice a scratch across your eyeball on your headshot, and you wonder how long you are going to need to regain focus. Chances are it won’t happen until you’re back in your car, swearing to yourself while searching for music to scream to as you drive off.

In the summer of 2013, I figured out what I can do to feel awesome during the whole audition process. It might not work for everyone, or maybe even anyone, but it’s worked for me.

If you don’t love the audition room, you’ll turn sour and people like sour pickles, not sour actors.

For this attitude to work, you must be prepared. I memorize my sides by understanding what the other character is talking about instead of focusing on the words my own character says. I think of Tobias and I decide whether this character is having a fire sale. I decide on music the character loves, decide whether they are meticulous or a slob, whether they drink coffee, and the couple hours before the audition are spent figuring out secrets the character has. The secrets are my favorite part. One character kept her eyes open and it made it seem like she was paying attention, but really she had a mascara allergy and her eyes burned whenever she blinked. Another character hadn’t brushed her teeth in days and that’s why she was so keen on getting in the face of the person she didn’t like. I booked that role.

Get yourself a secret, know your lines, and just accept every single thing that happens to you. Feel sorry for nothing.

If there is water to drink in the waiting room, drink the water. If there is candy, you eat that candy. Whatever you come across, say “yes” and don’t think about your resume or your headshot or your lines. If your character is chatty, say hi to any other Cathy who insists on introductions. If your character is an asshole, be short and sweet with the Cathy. Ignore the conversation and auditions of anyone else ahead of you—it’s distracting and it can alter your own interpretation or choices for the scene. You want a clear character with clear choices, stick to what you’ve decided.

When you are in the audition room, make sure to voice any requests or questions you have. This is your character’s space for a very brief time, you are in control of your audition and the casting director and any assistants are there to help make this an awesome time for everyone. Your reader might suck, but you’ve done a great deal of practicing with literally no one reading opposite you, so it doesn’t matter. Listen to everything the reader is saying. This is the most important part of feeling great during the audition. If you aren’t listening, you’re somewhere else and you’re not going to be able to appropriately respond, just like in real life when your partner drably asks you what you want for dinner and you aren’t really listening so you say you don’t care and then you wind up in a fight over really old leftovers and fast food hamburgers.

Don’t ever feel concerned about whether or not you leave a conversational mark on your audition. Don’t apologize for anything, especially if you mess up a line. Be engaged with the reader and don’t think about anything you thought about while preparing. All that backstory is sparking across a beautiful synaptical chain and you don’t need to recall any of it for all of it to be evident in your audition. Just be present, don’t be sorry, and leave that audition room swiftly. You won’t book most of the roles you read for, so don’t expect anything. If you don’t love the audition room, you’ll turn sour—people like sour pickles, not sour actors.

Get in your car and turn on music you love.

Scream out of satisfaction, not despair.