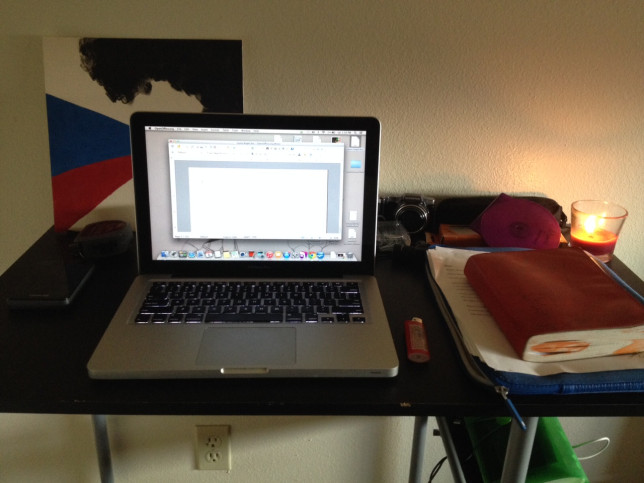 I have minor ADD. Well, maybe not so much ADD as I have a really short attention span. I’ve started more projects than I’ve finished…way more. And though my written work has been published, I’ve yet to tackle that most elusive of literary treasures, a published novel. At least not yet. So I thought that I would share my latest method for making sure that sucker gets done, slowly but surely.

You see, every novel I’ve attempted to write usually crashed and burned within a couple weeks. At times, I can still smell the smoke and catch glimpses of debris from where they once housed interesting concepts and dynamic plot lines. But such is life. One novel focused on twin ghosts (not my finest hour); one novel was going to be about an altered version of 1980s Los Angeles crime, with somewhat of a noir twist (but then I realized I know nothing about Los Angeles and have never been there, so I gave up); and my favorite failed attempt was going to be a book about sex from the perspective of a virgin aiming to use it or lose it, ya know what I mean?

But my latest attempt (plot withheld for privacy purposes) has been the furthest I’ve gotten. And it’s not slowing down! This one might actually make it into a first draft, which (once edited) could blossom into a second draft and possibly a third, which would then be ready for the hands of publishers (God willing!). So I’ll share my current method for sticking with a long-term project such as this.

For every project I’ve started, I quit once it wasn’t complete within the span of a few weeks. I thought I could Kerouac it in one fell swoop, creating a masterpiece in the span of a couple days. For some, that’s how it works. For those like myself, not so much. So when I started my latest attempt, I made a deal with myself that it wouldn’t be finished for at least one to two years, at least. I initially started writing one page a day. No matter how tired I was or how lethargic from copyediting and reading other people’s writing all day, I had to write that one page. It worked for the most part. It’s been one year, and I’m 152 pages in.

Hell, I even Googled how many words are in the average book-length manuscript, and a website told me 64,000 words. Not that that’s my goal; I was just curious. Right now, I’m at 50,462 words. I’ve written an almost average-length manuscript! And only because I leveraged with myself that this was the proper way to write a manuscript. The proper way to go through the process of finding a subject I was passionate about, characters I believed in, and an ending that didn’t make me want to fart needles. And I’ve found my method. I’ve finally found the system that works for me. Oh, and exercise helps too. I hate to be that person, but exercise gives you more energy. And if you have more energy, you have more energy to write.

This is the first time I’ve undertaken a long-term project that might actually find completion. Even if it doesn’t get published, at least I know I stuck it through, and I created something I’m proud of. Well, not sure on that one yet. But I’ll guess I’ll find out when I edit it. Cheers!