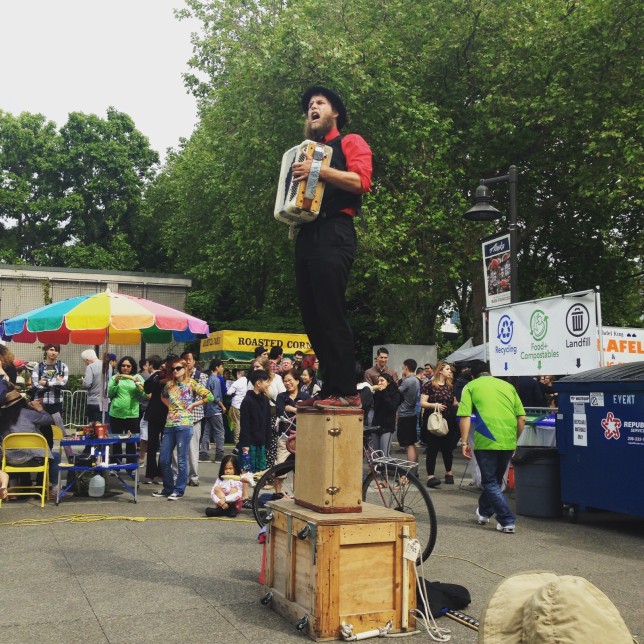 Circus performer Strangely at Northwest Folklife, doing what he does best. Photo by Aaron J. Shay.

Many performers and musicians start with busking.

I’ve busked intermittently for years. It’s never been my day job, although some folks have been able to make that work. For me, busking has always been a challenge and a test, of my will and my skill. I’ve done it at farmer’s markets and at music festivals around Seattle. I even did it in Iceland a couple of times (and yes, it was very cold, but not as cold as it was while jogging in Helsinki). I may not be the most experienced or successful street performer, but it’s taught me a lot about what I do when I’m on the stage, or in the studio.

Here’s what you can expect to learn about life and art from busking.

1. There are some people who will simply not care about what you do.

This is the hardest thing to learn as an artist of any stripe, but it’s also one of the most important for the sake of your own mental health. There’s only so much we can do to try and break through to the strangers who pass us as we perform. Even if you’re the most charismatic person in the world, even if you’re the most talented, there are people in this life who will not be interested in what you do. It’s best not to take this personally, or else you’ll very quickly develop a chip on your shoulder, which is one of the least attractive things a performer can wear.

2. In art, context is everything.

You might not look twice at a masterful painting if it’s hanging on the wall of a local cafe. You might spend hours looking at it if it hangs on the walls of the Louvre. This is context.

You might pass by a book by when it sits on the shelf of a bookstore, surrounded by countless others from countless other authors. But you might spend hours analyzing its passages and drawing the characters and creating fan-fic if it is given to you by your high school crush while walking between classes at a time in your life when a single, beautiful passion was what you wanted most in the world. This is context.

What I’m talking about is everything that surrounds the work, as opposed to the work itself.

The context in which we encounter a work of art fundamentally establishes our interaction with it. The people we are with, the space within which we encounter it, the social expectations that come with us into that space, the political events that are taking place during that time—it’s all context. And you can’t ignore it. At some point, you have to embrace it.

What I’m saying is, maybe this three-hour electronic performance art piece inspired by Dostoevsky’s Notes From Underground won’t go over so well at the local farmer’s market. Maybe you should try some John Prine instead?

3. There are many ways to succeed, and you get to define what that means.

I live in Seattle, and in Seattle Pike Place Market is the workplace of professional, full-time buskers. Rain or shine or overcast, performers come to the market every week to play their songs and make their pay.

And you can do it here. You can make a living. But it comes at a price. And I don’t mean the annual busker’s permit (which is a great investment, for the record).

You see, while Pike Place Market does attract quite a lot of locals with its delicious food and unique gifts, most of its visitors are just that. Visitors. Tourists. People who probably will never see you again. At worst, you get a few seconds of that person’s time as they walk towards you, by you, and then away from you. At best, you’ll get 10 minutes as they listen to you play three or four songs. Most of the time, if someone likes you, they only stay for one or two songs. Then they’ll drop some money in your jar, or they’ll buy a CD to take with them, or maybe they won’t do either of those things and just walk away.

So it should come as no surprise to find that many full-time performers have sets that only last about 15 minutes, usually songs that have a broad appeal. They play that set over and over and over for upwards of an hour. Then, they move to another spot and do the same thing.

And why not? You get a new audience every few minutes. And you’ll probably never see them ever again. If you find a handful of songs that consistently make money, there isn’t any economic reason to change. It’s a lot safer to go with what you already know will work, even if the people who work at the stalls are SO GODDAMNED TIRED of hearing you sing “Stand By Me.”

For some artists, that’s enough. It’s enough to live off your music and to be self-employed and working outdoors. That’s not a bad life, not by a long shot. For me, though, I knew I couldn’t live that way. Even if it meant having a shitty day job, I could deal with it as long as I had time to practice and play around and allow my music and my performance to evolve. Doing the same thing over and over again wouldn’t cut it for me.

I love Pike Place Market. I love the smell of the flowers, the delicious taste of the seafood, the wind blowing off of Elliott Bay. It’s a wonderful place.

But I’ve known for a while that my music career, insofar as I have one at all, isn’t there.

4. Some people will tip you with fresh produce.

These people are your friends. Smile at them and thank them and cook that shit into a delicious meal later.

Yes, even if it’s chard. Figure it out!

5. Art is as much for the audience as it is for the artist.

At a party a few months ago, I asked a couple of friends who are expert street performers what was the most important thing they’ve learned about art from busking. One was Strangely, the accordion provocateur and my sometimes collaborator. One was Luz Gaxiola, clown and circus accordionist.

(You can tell a lot about a person by how many accordion players they hang out with on a regular basis. If it’s less than two, NOT ENOUGH.)

Anyway, this is how they answered my question: Art is as much for the audience as it is for the artist.

Let’s break that down a little bit. Art is for the audience who experiences it. Art is also for the artist who makes it. The interests and needs of both parties need to be taken into account with equal importance.

If you’ve got a great idea for a performance that requires making the audience physically uncomfortable for a long period of time in order to experience the piece, you may, I emphasize MAY, be neglecting their needs. Perhaps there’s another way to get that point across? Maybe not, but think about it.

If you are creating a piece of performance that is killing your soul to make, but it’s guaranteed to be very popular and make you a lot of money, you may, I emphasize MAY, be neglecting your own needs. Perhaps there’s another way to win over the crowd? Maybe not, but think about it.

6. You might be the first musician a child ever meets.

We don’t live in a strongly participatory musical culture, these days. Compared to 100 years ago, children are much less likely to grow up with a musical instrument in the home. This decline is a natural byproduct of the recording industry.

The children you perform for on the street may have only heard music coming from speakers. We live in a world where that is entirely possible. You might be the first musician they ever meet.

When they stop in front of you and look in awe while their parents try to drag them onward, remember that what you’re doing is an uncommon act. It’s special. You can see how special it is when you look at that kid’s puzzled yet intrigued expression.

Give that kid something to remember.