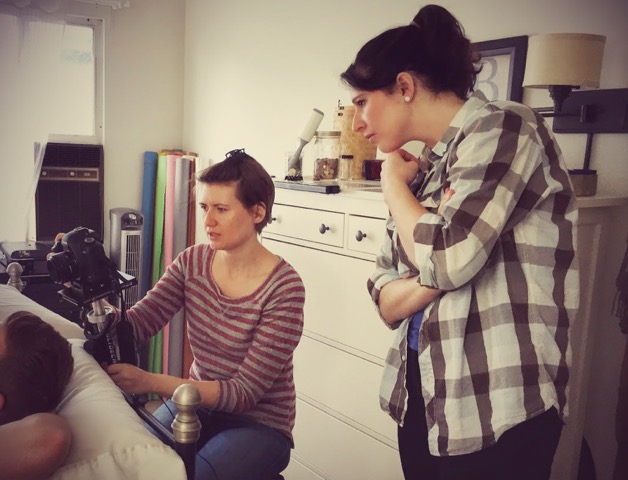 Carrie Prince is a filmmaker and entertainment enthusiast in Los Angeles. She likes to make stuff with cool people. She’s the director of the short film, Kinesthesia, which is currently being crowdfunded on Seed&Spark.

Recently, screenwriter/actor/producer/public speaker/director/comic book writer/author/comedian/ raconteur/podcaster Kevin Smith put up a little manifesto on his Facebook page which spoke to me at just the perfect moment during my first crowdfunding journey. With expected wit and humor, he pointedly called for us to find happiness in the pursuit of it—not as an entitled achievement. Clouded by fundraising-goal panic and filled with “what if” pre-film directing dread, I breathed a heavy sigh of relief as he put into words what I’ve been trying to explain to folks who, with raised eyebrows and curled smirks, inevitably ask, “So, what do you really want to do? What’s your end goal?”

I understand the confusion. For many years, I was a dancer, a choreographer, a teacher, then an actor. I dabbled in talent management, then casting, and then worked at a commercial production company. Suddenly, I wanted to blog and talk about life—better yet, record it—and created my own radio show/podcast, so I rounded up my favorite people and did that. Next, I jumped to studio feature films where I started at the bottom as a P.A. and then assisted producers that many people dream of becoming. I assisted celebrities, helped friends with their films, worked on my own projects and took any job where I could meet new people and learn something. I still do. 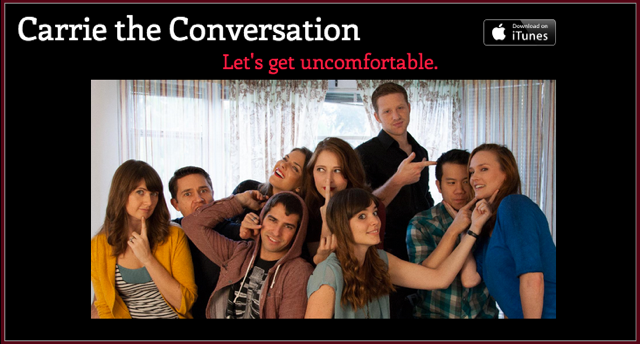 Carrie and her co-hosts created Carrie the Conversation, a radio show turned podcast available on iTunes.

When people ask me what I want to do in the entertainment industry, I just say “everything.” I want to be part of making stories in all different ways, I want to know what I’m talking about, enjoy who I’m working with, and know that I’m not wasting my time waiting to be happy. Sometimes that means I’m a P.A. and sometimes that means I’m directing. My faith in this model is built around the solid conviction that our whole idea of “success” in this industry is complete and utter bullshit.

Here’s my advice: Stop taking lunches with people you don’t like just to have a “connection.”

If there is a proverbial ladder to the entertainment industry, my experience thus far dictates that it’s definitely not a straight shot up. In fact, I’m certain it’s not just one ladder. There are countless ladders of all different sizes and makes, some rungs precariously holding on, other rungs spaced spastically and inconsistently apart, some barely started, leaning against different eras of gloriously well-manicured buildings, all of which hold a lot of promises for ladder-climbing hopefuls. Promises of making rent without anguish, or even better, being able to afford a real, live house somewhere within 50 minutes of where you actually want to live. Promises that job opportunities won’t ever run out, no matter how much the younger generations know more than you each year. Promises of a firm handshake when finally meeting, of Respect, Validation, and their older, wiser sibling, Happiness. Promises that you’ll get to give that thank you speech you’ve been reworking since high school when that mentor-like coach made a lasting impression—the first crucial factor in a series of inspirational treasures that all came together to bring you to this moment. The top rung. The end goal. Ultimate satisfaction. #WINNING!!!

Well I say screw the ladders. I believe this ladder mentality is a fallacy for success, let alone happiness, and will become more so as this decade in entertainment sees itself through. It took me a few years to come to this conclusion, but I am now resolutely at it. There is no top rung. There is no end goal. We just keep going, keep creating, keep working—doing stuff that doesn’t debase our creative or business spirits. We make what we can with what we have. Most importantly—and this is pretty key to helping with all these other things—we must do it with people we like and want to grow with. That’s been my proud revelation this year as I hit 30 smack in the face with a short film up my sleeve and a full-time production job up the other.

Our careers stretch out before us in such deliciously unpredictable trajectories, why waste precious years waiting to feel good about ourselves and have fun? Do it now! Have fun now! What are we waiting for?! 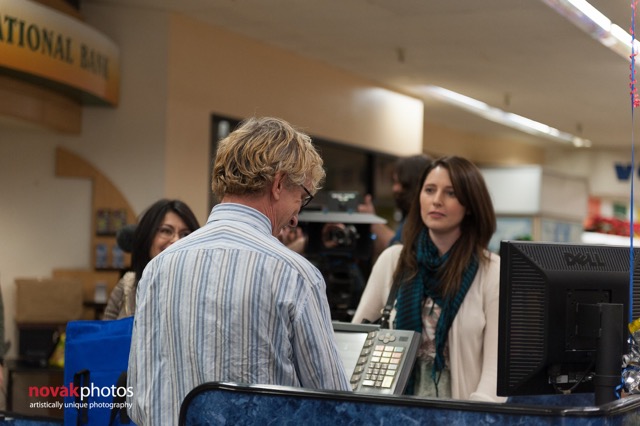 Acting opposite Andy Dick on the set of the short film Lovecat.

The only reason I feel free to give this advice is that I’ve seen my fair share of both sides of the coin. There are miserable people who finally get that salary bump, finally meet with the big hitters they dreamed of…and they’re still miserable assholes all the time. I still don’t want to work with them. They’re terrible. On the flip side, I’ve taken jobs that I know may be beneath my experience, but the people are great and it always turns out to be a door-opener for jobs that are fitting to my experience.

Sometimes, I feel like our industry is overwhelmed with an absurd number of conniving, youngish ladder climbers who are waiting until they hit some ridiculous salary raise and get written about in the Hollywood Reporter to enjoy their job and like themselves. The not-yet millionaires seem absolutely wretched most of the time, wearing themselves thin and stripping themselves of the last remnants of their self-respect until they turn into a stereotypical Hollywood disease that seeps into the workplace and becomes a cause for the glorification of suffering. They play the “let’s see whose life is worse” game and they win because they’re “earning” it.

I’m not into that. I’m into balance and self-respect (in any job position). I’m into nice people. I’m into working on big-budget blockbusters just as much as zero-budget indie films because both are valid experiences and powerful to know. I want those of us who are still struggling to not be afraid to switch ladders, and to not have any hesitation in saying, “I’m over this for now. I’m stopping. I’m switching.” There is no shame in wanting to do more than one thing in the world. Every new pathway you start on inevitably will borrow skills from the last. Best of all, you won’t waste days miserable and working with people you don’t respect, and don’t enjoy.

Here’s my advice: Stop taking lunches with people you don’t like just to have a “connection.” Stop debasing yourself by working for horrible bosses because you think it’s the way up and they are paying you something. Be nice to people and attract others who are nice to people. Do not envy those perpetuating the stereotypes of industry slavery in exchange for an “experience” that’s not a good one. It’s horse crap. Work really fucking hard with people you like, on things you like, and find a job that pays the bills that doesn’t suck your soul. Don’t worry if that job isn’t prestigious or considered “successful.” You do what you need to be able to enjoy your day to day.

My day to day lately is filled with a full-time production job for a boss I like, a few side projects in development, and preproduction for the short film I’m directing, currently being crowdfunded on Seed&Spark. You might think after hitting our goal I would feel like a big bag of success, but the truth is, after all the worry and gnashing our teeth over just hitting our very reasonable goal, the first thought we all had was: Let’s make our goal harder! And so it continues.

As Kevin Smith pointed out, “Happiness can’t be bottled. It can’t be smoked, swallowed, shot or ejaculated. And there is no end game: You never cross the finish line and are suddenly happy. Even when all your wildest dreams come true, you still pursue happiness.”

Check out our campaign on Seed&Spark and see what we’re doing!