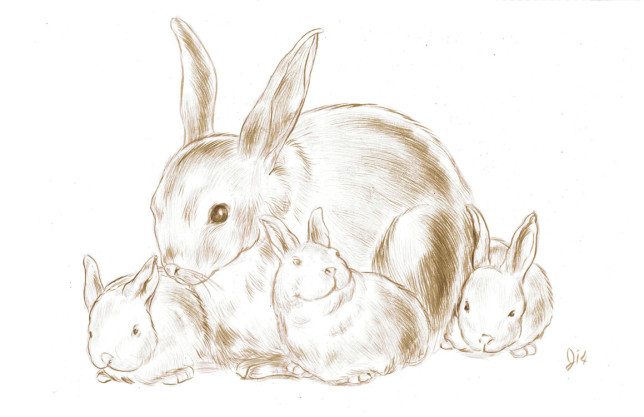 As soon as it arrived, I regretted it.

Barely able to fit the enormous, pasty-white behemoth through the doorway, we carried it inside.

“It’s going to be displayed in the public library! Isn’t that perfect?” she said, knowing that I was in the kid’s book game.

You may have heard about this kind of thing. A city will provide local artists with an enormous fiberglass sculpture and ask them to donate their time to decorate it. In one city it was cows. In another, sharks. These sculptures are then displayed throughout the city at various locations, later to be auctioned off in a citywide event.

I had postponed and procrastinated. The deadline was only two weeks away.

This time it was rabbits, and it was for a neighboring city. The extent of my payment would be $200 for materials. I was contacted in an email by the organizer, Ms. X (not her real name), who had somehow become aware of my work on the internet. Other artists had to submit their portfolios to be considered for the project, but I was chosen. With my ego thus massaged, and my nostalgia for a time in college when I envied the artists who got to paint all of those enormous multicolored cows that lined the streets of San Francisco, I accepted the offer. The event was nearly a year away. The rabbit would arrive six months before the deadline. I had plenty of time.

It didn’t seem like very long before the rabbit arrived.

“Do you have something in mind?” asked Ms. X.

“I think so,” I said, staring at the monster that was now holding court in my living room. My plan had been to turn it into a rabbit hutch. Rabbits would be climbing it and peering out of little holes or what would be painted to look like holes. It seemed like a good idea six months ago. Now I wasn’t so sure.

My dog sniffed it, and with a whimper, scampered back to her dog bed.

Soon after Ms. X left, I moved the rabbit to the backyard. And while this allowed my wife and I to once again enjoy our living room rabbit-free, it failed to prevent the rabbit from haunting our lives.

At night through the glass patio door and from the light of the living room, the rabbit glowed stark white against the darkness, staring at us with its eerie, empty eyes.

During the day, its stare was no less unyielding. Each passing day I had to face its disappointment. Its disdain.

“How long are we going to be living with this thing?” my wife asked.

And while on the one hand, I was glad for the roomy deadline, I hadn’t counted on how much mental and physical space it would take up.

I covered it with a tarp. While the tarp effectively concealed the monster, it did little to relieve my anxiety. Within a couple of weeks, I got a small stack of promo-cards in the mail to promote an event that was still more than five months away. Why were they sending me these now? I tossed them in the garbage. What was the point?

Barely a month had passed and I received a request for pictures of the work in progress. I still hadn’t taken off the tarp. I said I didn’t have anything to show just yet, but I would soon.

After two months I untarped it, brought it into the house, and got out my paints. I had reference photos of rabbits and I was ready to go. But my confidence was slipping. I’d never painted on a three-dimensional surface before, but I was sure it would be fine. It would turn out great, and it would be over and done with.

My first attempt was not a success. I painted over it. My second was no better. There had to be another way. I had heard about the acrylic transfer technique, a method whereby a color copy of an image was transferred onto any surface. I watched a Youtube video about the process. It seemed simple enough. Transfer, peel away the paper, done.

So I started painting my rabbits on paper. This I could handle. I would paint the rabbits, scan them, make color copies, and transfer them onto the giant rabbit. I would then paint the little rabbit holes around them. Over the course of a week, I painted the rabbits and was pleased. Certain that the next step would be easy, I set the project aside. But the deadline still loomed. As did the rabbit—a hazy, rabbit-shaped outline under the plastic tarp still sitting there on the back porch.

I had postponed and procrastinated. The deadline was only two weeks away. I received a reminder email from Ms. X and assured her that it would soon be ready for pick up. I made the copies. I tried the acrylic transfer technique. It did not work. Apparently “any surface” did not mean just any surface.

No matter. I would cut out the rabbits and decoupage them on, then paint the little holes around them as planned. Stick them on, paint the holes, done. While the decoupage process worked reasonably well, the holes did not. No matter how much I tried, I could not seem to paint convincing holes. I painted over the rabbits that were supposed to be peering out of holes, and decided to cover the thing with the remaining rabbits. Instead of a rabbit hutch, it would be a giant rabbit decorated by other rabbits. There were not quite enough rabbits to cover it as completely as I would have liked, but it was done. Finished. Hurrah.

Ms. X arrived to pick up the rabbit. Her attitude seemed neutral. I felt compelled to explain some of my trials in working on the project. She asked me to sign it, said it looked lovely, and we loaded it into her car.

She had a lot of work to do. But all the work I did apparently wasn’t good enough.

Just picture that for a minute.

I soon began to feel better about my own contribution. Even though mine might be a little naked, my rabbit paintings were professionally done. It was good work. These others clearly sucked.

Ms. X was of a different opinion.

Before I had a chance to respond to her first email, she sent another email. “Let’s brainstorm,” she said. Maybe we could cut out some pictures from one of your books and stick them on the rabbit to fill up the rest of the space? In fact, she could do this herself, if I didn’t care to.

Just as I sent this email, I got another from her that said, “Did you get my brainstorm?”

Soon after, I got an email that said she didn’t mean to offend, and she was sorry this didn’t work out to our mutual satisfaction.

But I wasn’t finished. I wrote her that nothing had fundamentally changed, that she still did not find the work I did satisfactory, and I would not be attending the event because I was not going to be subjected to that kind of humiliation. I had never intended to go to the event in the first place, but she did not know that.

She then told me that she would not be displaying my rabbit, and suggested that, to spare my embarrassment, she could say, “Sadly, it was damaged,” or, “Sadly, something happened to it,” and that the truth could remain between her and I. Further indignant, I told her that I did good work, and that this was her embarrassment, not mine. That she should write the truth: that it was rejected.

Okay, this wasn’t all I wrote. There were more emails. Indignant turned to just plain pissed. I’m not proud. I asked what would happen to the rabbit, and she said it would be destroyed or painted over. Eventually she said she was overwhelmed with the responsibilities of the event, that she had a lot of work to do and ended the conversation with a curt “goodbye.”

Yeah. She had a lot of work to do. But all the work I did apparently wasn’t good enough.

I explained all this to my wife. She listened. Then she said,“Do you want me to be honest?”

I said I did. But I wasn’t sure I liked where this was headed.

“It’s true, she was a jerk, but you weren’t so happy with it either.”

And she was right. I hadn’t even bothered to take pictures of it. There would be no evidence, and I was relieved. I was relieved that it was over and no one would ever see it. Besides, I still had my original rabbit paintings. The ones on the giant rabbit were only copies. Not that I wasn’t still pissed about the whole thing. Ms. X is still definitely on my shit list. As for the rabbit: I hope they crush it into a million pieces.

(By the way, the original rabbits are now available in my Etsy shop!)