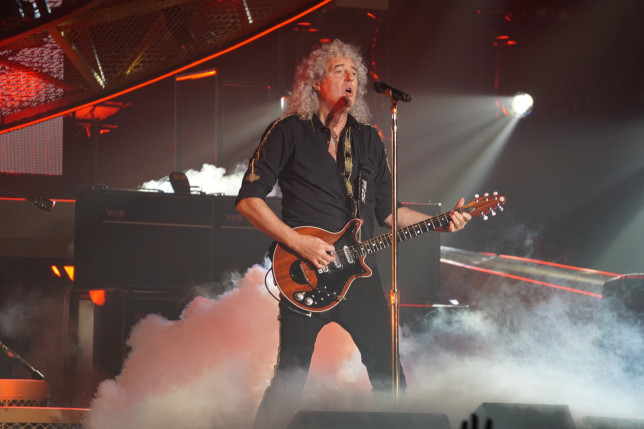 Brain May of Queen has a PhD in astrophysics. Photo by Mark Kent.

It’s known that a lot of musicians skip out on college. They view it as a waste of time, since their primary focus is getting their music career off the ground. Of course, an actual “career” in music (or really any art) isn’t ever guaranteed. The fact is that a lot of successful musicians have degrees. Heck, even Fat Mike has a Bachelor’s degree in Social Science. I would definitely say that going to college taught me how to learn in general and gave me some of the skills I’ve expanded on as a musician. Now I’m more proficient in my hobby and passion as a musician. Here’s a few things my college experience taught me:

I can write professional letters and messages.

As if there’s anything less punk, I got my bachelor’s degree in business with a focus in marketing. I had the fortune of putting together my own independent study program with the help of a professor in my last semester, which I chose to do on the music business. I interviewed people at Sub Pop and Deep Elm Records, tour managers for bands I was a fan of like mewithoutYou* and Red City Radio, and quite a few booking agents.

While that was a fantastic experience and I learned a ton about what I want to do with the rest of my life and my degree, the biggest thing I’ve used from the whole experience was the art of sending business emails. It was around the time I booked my band’s first tour, started writing for one of my favorite music sites, and eventually ended up doing PR for a cool label in California (as well as doing it for my own label and band). I used my independent study experience for all of that, and a lot of it was done over email with the tools I learned just setting up those interviews.

*Speaking of mewithoutYou, did you know Aaron Weiss is a college graduate and a Professor?

Guitar geniuses have always told me, “Don’t worry about what name is on the headstock.” The fact is, some of the biggest anti-establishment artists play expensive rigs they could have bought brand new at Guitar Center, so even with that advice it was hard to want anything other than what was the most popular in the business. Now, I’m not one of those people who has a huge chip on his shoulder about name-brand items, but I am someone who used the money he made working at Subway to pay for his school books, as well as his musical gear. At my school, they pushed very hard for us to use the college bookstore. To me, this was like the Fender or Gibson of textbooks. What I found out was that using the bookstore sucked! There’s plenty of college textbook sites that are unknown or underrated—Bookbyte, Textbook Rentals, RentBooks—of course, always do some digging to find which ones are the most reliable.

And of course, I’ve transferred the same philosophy I had about books to my musical equipment. Most of my current gear is made by a local guy in Boise, and frankly my guitar sounds a lot better to me than whatever poorly set up guitar I could get for $1000 at Guitar Center.

I can organize events.

I kissed Subway goodbye and worked in the Christian Campus Ministries at my college for my senior year. In this job, I was supposed to help organize and get people to events which helped in fostering community. Sounds a lot like promoting a show, doesn’t it? One of the biggest things I learned from this was while flyers and Facebook events can be helpful, word of mouth and personal invites are the real, important last step to sealing the deal with people who may or may not come to the event you’re putting on, whether it’s a backyard party or a sweaty basement show. I also learned the importance of spreading out your events, so people wouldn’t get tired of them. Bands, if you don’t know this by now, you should not be playing shows every weekend for that same reason—people will get tired of you and you will not contribute anything to your scene or the shows you’re trying to promote.

I learned by doing, with focused effort.

I went through four years of college and I’m pretty sure the majority of my knowledge about business came afterwards when I finally started doing it. You can study all you want, but you don’t actually start to retain information or even be slightly good at something until you sit down and finally do it. This was my story all through college—when I got good grades, it was because I figured out how to do the tasks assigned to me. When I got mediocre or not-so-good grades, it was because I was floating by, and not retaining what I got from homework or lectures, and my test grades suffered. So the same goes with music: songwriting, putting out albums, booking tours, promoting shows—you learn the most when you just get it done.