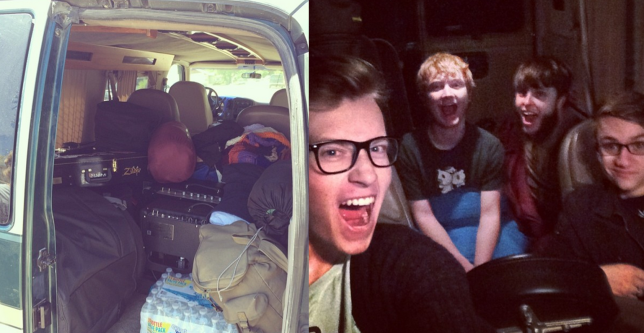 Our van/us sleeping in it.

The thing that makes touring so exciting is the new local adventures you have in each town. Since you’re only there for a short amount of time and are generally spending time with people who live there (bands, promoters, showgoers), it’s not a touristy experience as much as it is an everyday experience of life in that place. This includes going to local bars and restaurants, parks in walking distance of venues, malls, and movie theaters—you know, things you’d do if you lived there.

Of course, something that’s not so common to those living there is finding random floors to sleep on every night. And frankly, that can be really stressful and ruin your stay. From touring over the past few years, I’ve come up with a good set of options and tips for finding a place to stay on the road.

I don’t know many musicians who haven’t had at least one slightly scary moment in a stranger’s house.

This is the most common option when crashing in a new town. Staying on people’s floors isn’t just convenient, but you can also meet some of the coolest people doing it. The second house I ever stayed at on tour was with an ex-Tooth & Nail employee who had, at one point, worked closely with Slick Shoes (get educated) and P.O.D. She also had the label’s discography 1-100 arranged in order lining her walls. It was the coolest thing, and I never would have experienced that if we’d opted to sleep in the van.

Of course, staying with random people can be a sketchy business. In fact, I don’t know many musicians who haven’t had at least one slightly scary moment in a stranger’s house. So before you just stay with the first fan who offers you their facilities, I recommend asking a few questions.

One, do you have it on good authority that they are safe people? I had a trustworthy friend who had worked with my Tooth & Nail friend, and it proved to be a good experience. Of course, that hasn’t always been the case—but it’s turned out well almost every time it was.

Moreover, what are dealbreakers for you guys? Does the place need a shower? How clean does it need to be? Are there excessive amounts of substance abuse? I never knew how much I cared about the place being clean until I started questioning where the black stains came from on a stranger’s carpet. For related reasons, we opted not to use their shower either.

Personally, I hate paying for hotels on tour. But sometimes you can’t find someone willing to house you, and there might be too many of you on tour to sleep in the van. At times like this, it’s justifiable to spend your door money on a hotel room.

It’s not always too expensive: I have friends in a band who landed a $50 hotel in Vegas on their most recent tour. Of course, like anywhere else, it may be wise to have one or two of you sleep in the van just in case someone tries to break in, especially in a sketchy garage or parking lot.

Another option I’ve recently discovered through the search results on Hipmunk is Airbnb. (Why had I not heard of Airbnb before? Because I play my guitar instead of staying up to date with life.) Essentially what this means is that for as low as $60 or $70, you could potentially have a room or an entire guest house for your entire band. Of course, you could get something worse than a hotel room as well, so it just depends. However, the longer your tour is, the better a bed starts to sound. Similar to the hotel option, potentially the same price, but much more homey. 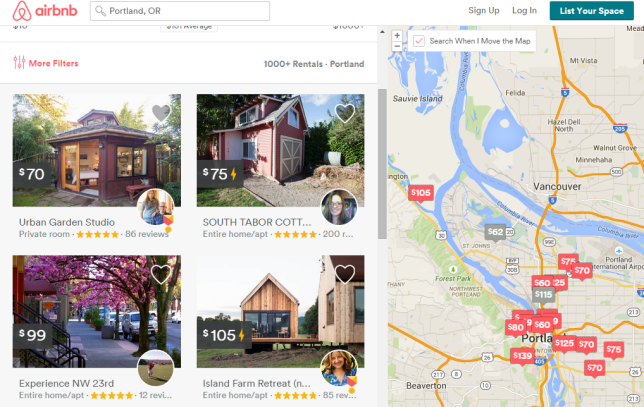 The beauty of Airbnb!

Sleep in the Van

I personally love sleeping in the van because I’m cheap and it doesn’t cost us any money. Granted, I play in a band with only three other people which provides for more room than your band might. But if the space is there, why not?

The first time we ever had to sleep in the van, we had just finished a show in Ellensburg, Washington. The four of us were pretty tired, and since we had nowhere to stay, we opted to pull into a Flying J and have the best sleep of our entire lives. After moving our gear up front, we bit the dust and snuggled up in the back. Seeing how much money I didn’t lose that night, and that I wasn’t killed by complete strangers who offered their homes to us, completely opened my mind to the wild, wonderful convenience that is sleeping in the van.

Also, if you opt for this option, find some sort of a rest stop or “travel plaza” of sorts. They usually have breakfast food, 24-hour gas station lobbies, and bathrooms you can use. It totally rules.

There is camping out, like in a Walmart parking lot or something, and then there’s camping. And unfortunately, bands typically don’t do the latter, but I’m not sure why. And to be fair, I haven’t done the latter—and again, I’m not sure why.

A few things about this: 1) Camping is fun, and a lot of tours are done in the summer. 2) Many tours have at least one off date that would be perfect for outdoor exploration and activity, especially if you’re in the Northwest, which, by the way, is a very popular touring spot.

If you choose a campsite, be prepared to pay some decent cash for it (this is the kind of thing to plan on before you leave for tour). However, maybe a promoter or band member who is relatively local can recommend some good hiking spots in the area with places that are good to set up a tent and start the fire. Of course, the biggest problem comes down to what to do with your gear while you’re away from the van for that long, and it’s something I don’t have a good answer for. Depending on where we were, we might leave it with a friend—but that would not typically be ideal.

Has your band gone camping? Where did you leave your gear? Any thoughts about what I said in this article? Let me know on Twitter @robolitious!