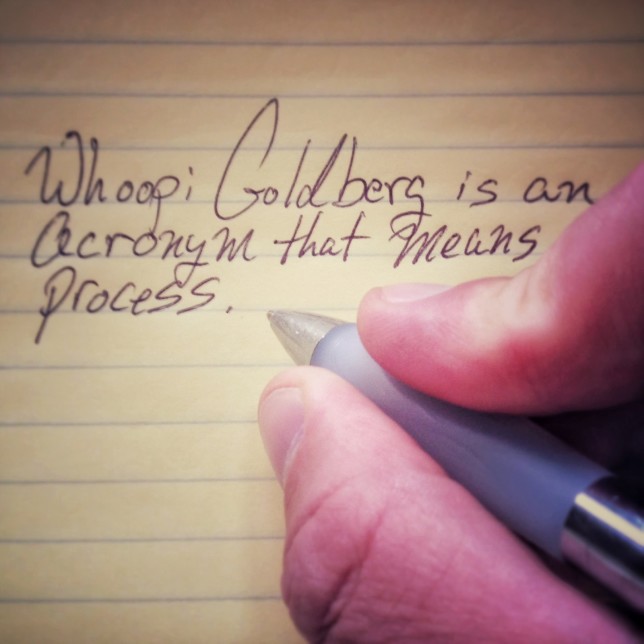 The creative field is as finicky as the people (self-)employed within it. Perhaps, it is recognition of this parallel that draws the artistically inclined to a discipline so similar to themselves.

Writers occupy either side of the productivity spectrum at any given moment. The moments of great inspiration more than make up for those where simply getting out of bed is the greatest challenge. However, maximization of the former is the ideal and dependent on the ability to intentionally construct an atmosphere conducive to creativity. As an academic writer responsible for producing papers every two weeks or so, I have been attempting to isolate the foundational factors of what fosters thought conducive for my own work. What I found most helpful is W.H.O.O.P.I.

As any viewer of the first, second, or twelfth Sister Act (3D) is already aware of, Whoopi Goldberg epitomizes contemporary wisdom, grace and sass. Her IMDB page boasts 146 movies since 1982, most importantly last year’s masterpiece Teenage Mutant Ninja Turtles. If anyone is equipped to lend their title to what some (myself) have deemed the finest acronym in all the land, it is indefinitely her.

As the ancient Chinese proverb says, “If you can’t say something in acronym form, don’t say it at all.” Or something. Namaste.

Let’s break it down Whoopi style.

Moments of inspiration are not governed according to your schedule. No matter where you are, if you have an inspirational thought immediately locate means of transcribing it, because you WILL forget it. Life is distracting and thoughts are fleeting and elusive.

Have enough caffeine on hand, at all times. (2)

Ain’t nobody got time for linguistic limitations, English is an evolving language ever-seeking addition as Beyonce proved circa 2001.

This cannot be emphasized enough. I only wish that Whoopi’s parents had named her HHwoopi, so that this one could go first and twice. Coffee is the foundation upon which everything else flourishes. Proper caffeination is an art form, critical to any production, creative or otherwise. Don’t fuck around with this, for real.

Openly converse with yourself. (3)

Working things out verbally facilitates flow of thought faster than writing it down. Sometimes thoughts are not meant for other ears, or no one is around, so you become your best audience.

A vitamin cocktail in the morning will significantly impact your quality of life. Did somebody say cocktail? Maybe it is a psychosomatic illusion, but it works. When your body is nourished, your brain functions better.

Podcasts are your friend. (5)

The brain is a muscle that needs to be exercised, and the passive learning afforded to one by podcasts is the perfect tool. As a literature student, I personally spend a lot of time reading and writing. When this self-directed form of brain engagement causes mental fatigue, I switch to podcasts where smart people impart information directly into my ears while I sit on the train to and from school, work and social engagements. They are additionally helpful because material for conversational lags is immediately accessible. You become a veritable wellspring for random information about the origins of American football or the color receptors in a mantis shrimp. I recommend Radiolab, Partially Examined Life, TED Radio Hour and The Infinite Monkey Cage.

Ain’t nobody got time for linguistic limitations. English is an evolving language, ever seeking additions as Beyonce proved circa 2001. When writing, don’t limit articulation to already existent words. A personal favorite pastime of mine is making nouns into verbs, once you start you cannot stop. Expression is a game, so be playful and have fun!

Unintentionally becoming a Nike representative here, but endorphins do it for me. Every. Single. Time.“Just Do It” or whatever. The post-run shower is where my best ideas arise. I don’t claim to understand the science behind it, but it works. If running isn’t your thing, then you are a worthless human being. Kidding! Find something else. Might I suggest karate?

Find where you work well, and designate it as an office of sorts. If that happens to be home, that is great and highly convenient. Personally, I have to get out of my apartment to focus and not use my own computer. When it is work time, I go to my “office” and my brain switches into production mode. I don’t write as well on the same device with which I binge watch Top Chef.” Differentiation of space is my savior; when I sit down at my work computer it is business time (queue Flight of the Concords).

Even if you are not feeling particularly in the groove, or haven’t fleshed out an idea in full yet, just sit down and allow it to go somewhere. Find a scrap of paper you scrawled a half-coherent thought on in the elevator en route to your grandmother’s bird’s funeral and just type for 15 minutes without overthinking. Just see where it takes you. Worst-case scenario: It is all complete shit and you never look, think or speak of this idea again.

Your material is the world; engage with it.

When trying to get into a creative mindset, nothing kills the mood faster than getting sucked into the black hole of Facebook or Instagram. As an avid partaker in both, I am not suggesting there is not a time and place for glorified virtual stalking, but when attempting to be creative it is absolutely counterproductive. Everyone is just working out, photographing their journey to becoming bodybuilders, showing off their engagement rings, posting videos of their babies, and generally succeeding at life while you sit in your one-room apartment doing the opposite. Looking at this kind of information inevitably leads to a self-destructive hurricane of failure. Save that for a Sunday night like a normal human.

Explore, engage with the world, waste an afternoon watching an Insane Clown Posse documentary and subsequent ICP music videos. Your material is the world; engage with it. Some weird shit is happening all around us.

Write now, edit the next day, then edit that edit the day after that. Leave it for a week and then edit the edits that you have already edited. Say that five times fast. I like to have multiple projects going at the same time so I can switch between them at different stages of production. Fresh eyes are essential to a good edit, and distance is necessary in order to adequately evaluate your work. Afford time for this process—a week at the very least before deadlines.

Set aside the time before bed to disconnect, and read preferably from an actual book, or set the light all the way down on your Kindle/iPad/whatever. Not only will this allow you to sleep better (crucial for mental health), but it ensures you are reading, which as an aspiring professor, I sincerely believe is a practice the importance of which cannot be stressed enough. I maintain books are the cure for everything. Even Twilight. It doesn’t matter what you read, as long as you are reading.

Some days it’s just not going to happen. That’s okay, go do something else. As with any profession, you are not what you do for a living. Go hang out with your friends, walk your cat around the block as though it is a totally normal activity, get really drunk and make some bad decisions. You can be brilliant tomorrow.