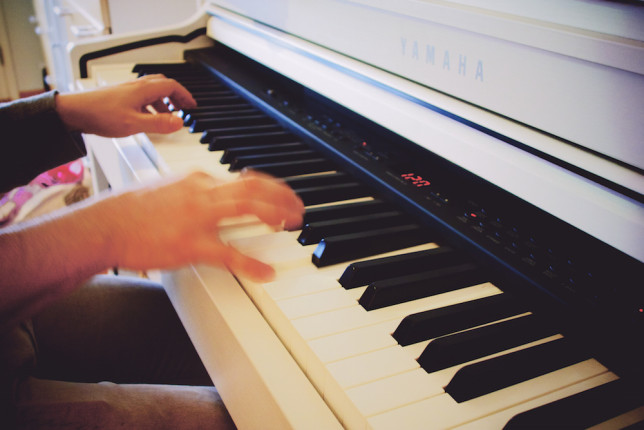 This post by musician Rowen Bridler is being published jointly by Pyragraph and Soundfly in celebration of #SongwritingWeek! Join the conversation on social media (#SongwritingWeek) for even more tips, articles, and resources.

The privilege of being a songwriter is that I never know when I’m going to be inspired with a new idea for a song, nor if I will have to push for that inspiration to show up in the first place. Some songs come about easily and others take lots of cajoling. Here’s a bit of insight as to how my songwriting process unfolded for a particular song I wrote about successes and failures: the miracle of aviation, the airplane that made a “successful failed landing,” and the relationship that failed after a successful run of many years…I’m going to let you see how a new idea evolves into a fully-fledged song I can perform at a gig.

I was having dinner and watching an incredibly thought-provoking YouTube interview with an artist I’ve followed for years. She was talking about a number of things including cultural identity issues for someone who travels a lot. And some of it obviously sank in, along with a sense of nostalgia around her music and the years that had passed since I last followed her work closely enough to dig up an interview or two.

Her thoughts and opinions struck a nerve—inspiration can come from unexpected places. So as I sat down at the keyboard later, a nostalgic and almost Christmas-y—but in a melancholic way—kind of tune came out. I fiddled around with it a bit. And then I got a rough recording of the piano part done using Voice Memo on my phone. (Yes, I’m that high-tech.)

Here’s what I first recorded, mistakes and all.

The funny thing about getting started on a new song idea is that it might not be the only new song idea that pops up around the same time. It’s like buses: You wait an hour for one and then two come along at once. I could pretend there’s a linear and chronological order to things that would allow me to complete one song first and then move on to the next. But it doesn’t always work like that.

I had the good fortune to be able to use a friend’s piano at her flat while she went out and it’s amazing what a change of space can do for inspiration! I was continuing to work on the song, but then something else happened. I had another idea arrive that I was able to tag along a bit of vocal melody for early on.

The vocals were the roughest they’ve sounded in ages (which may be to do with there being no heat on in the flat at the time, so I was very cold!) So here’s the no-vocals version.

I braved the cold flat in a warm jacket, drank lots of tea, and carried on anyway…it was such a pretty piano.

Having worked on two songs almost simultaneously, I got embroiled in what felt like a race to see which song got completed first. Spending time at a local piano practice room, I played what I had already established of the songs and improvised the rest, which was mostly the lyrics and vocal melody line. I generally need something established to play on the piano first, in order to have something I can build on lyrically (unless I start with a beat or other idea).

Here’s where I got to at this stage with the second song that emerged:

As for the first song, having put some basic words and vocal melody to it, I found I needed to go back and do some more research for the lyrics. The song is based around two main stories: a relationship ending and the airplane that had to ditch in the Hudson River, where the pilot made it look like he was landing on the Hudson as though it was simply an alternate runway. (What incredible skill that pilot displayed!) I started out gathering information for the song by watching a documentary and jotting down lots of facts and figures into my notebook. Then I tried adding some of them in to the lyrics. Here’s what the results looked like at this stage:

“so they landed in the Hudson,
but they all made it out alive
though they didn’t get as far as Teterboro
they made it out onto the wing and home
and we made to the start of the recession
but we didn’t make it out intact, beyond that
but then she got ill and you had someone else to turn to,
you had your own Teterboro and it worked for you
it worked for you, and good for you babe…”

Teterboro is an airport in New Jersey that was the last emergency runway the plane could have made it to in time. But the theme of time and timing is key to this song. The other “loved and lost” thread of the song is a story about being prepared or not, the timing of when you are and when you aren’t, and how there’s little you can do if it’s just bad timing.

The song I had started with at the very beginning was indeed the one that got completed first in the end, despite the demands the second placed on my attention. I realized that this first song wasn’t going to develop into a traditional “verse and chorus” song, nor was it going to be particularly tight tempo-wise. It ended up being a very rubato, free-flowing kind of song with stream-of-consciousness lyrics. It reminds me a bit of the freer-styled songs of Regina Spektor’s early work (but you can be the judge of that!).

The idea around the Hudson landing developed into thinking about planes and aviation more generally and the miracle of how that works, which reflects nostalgically against the comparison in the song of a relationship that didn’t work, or at least, that failed after a long period of time. I’m sure the plane had had many successful flights before the birds that were enveloped by the engines brought it down one last time.

Here’s a video of me performing the song its completed form:

And here are the finished lyrics:

Rowen Bridler is a singer-songwriter and film actress based in London. Her music work sounds like Tori Amos or Fiona Apple with the cheeky sarcasm of Lily Allen. Her latest single, “Lifeboat” was played by Tom Robinson on BBC Radio 6 Music. Her acting work includes several Scandinavian directed pieces, including a role in the Ole Bornedal ‘1864’ drama, speaking in German. Needless to say, she is a fan of variety, foreign languages and writing songs that hit a nerve. From songs about politicians’ expenses to who’s “really” running the government, as well as a love of the melancholic, romantic song with a twist, she takes on difficult subject matter and injects a little humour, one song at a time. Keep up with Rowen on Facebook, Twitter, and at her website.