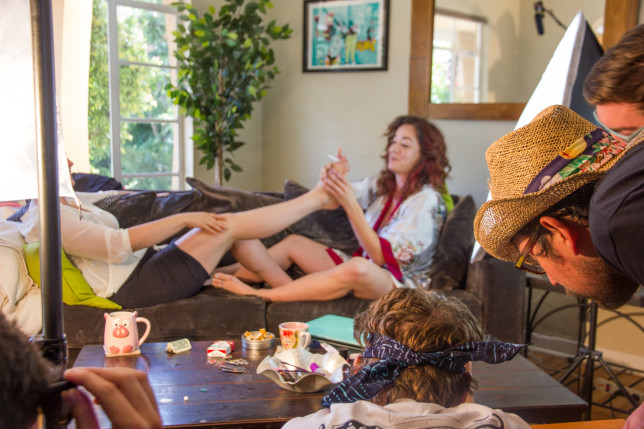 “Alright Jeremy, you’re going to have to make the call here.” Our Executive Producer Daniel Campbell looked at me with a stern unwavering face that I would be sick of by the end of the day. “It’s 8:30. We should have been shooting an hour ago and he should have been here at 7:00. Who’s got the most acting experience on set right now?” I looked around and immediately knew the answer to the question. It was me.

“I’m the one with the most acting experience here.” Directing myself as an actor after staying up all night writing sounded like a pure, unadulterated nightmare. The scoffs, snickers and shrugs for just this one aspect of our film that fell short. “It could have been so good….” echoed through my ears. It would be me, from behind the camera and in front of it—our movie’s fatal flaw. This is my nightmare; this is the 48 Hour Film Project.

Sometimes just cleaning a toilet as a director is a lot easier than asking someone else to do it.

Fortunately, at the moment I came to terms with me playing a schizophrenic neighbor, our producer Liz Pate came to us with the news that our talent was en route. This is production under the constraint of a 24-hour limit. I say 24, because if you go beyond that 24-hour production limit (leaving another 24 for post-production) then you risk the chance of, to put it lightly, being fucked.

Here are some more tips for first-time directors attempting to do the 48.

Get a REALLY good team together.

Get a core of people you really trust creatively and meet with everyone as much as possible before the actual 48. Familiarize everyone with each other, especially if they haven’t worked together before. This is essential. Hash out as many details as possible: equipment, food, locations. That shit needs to be ready when the 48 hours start.

Notice, I did not say crew. You could get the ’92 Dream Team of filmmaking together for this project. The cream of the crop, the best in every respected position, and they would likely produce a brick. You need to get people that work well with one another. A group that will stand behind a single vision, believe in it, and use every creative fiber in their body to make it happen. Having too many egos who believe their vision is the best for this project could potentially just make for a production trainwreck. If someone is lagging or doesn’t want to be there, tell them to leave. There’s not enough time to argue about whose vision is best. There is one vision, execute it. 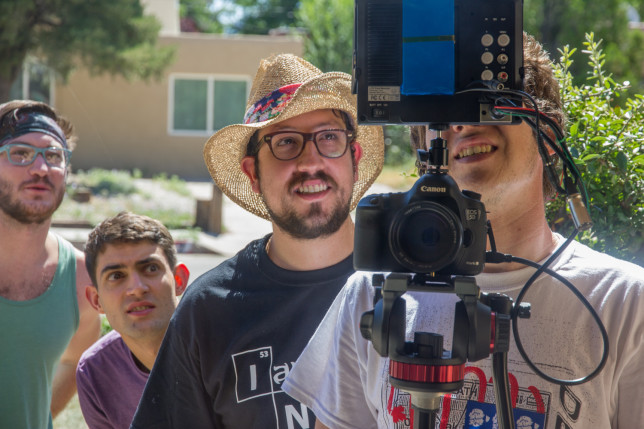 Getting the money shot with Andrew Raymond (far right). Photo by Andrew Gatewood.

This is the best way I’ve found to create an environment in which everyone can flourish creatively. A happy set makes for happy people which makes for a fun experience. Input is conducive to the process, and in this scenario people feel less judged and work the best. Ethical and creative output are maximized, and you won’t even realize it because you’re actually enjoying the process. Yes, this may be one vision, but it may go in another direction that was far better than you anticipated. Egos are set aside and, truly, a better product will be birthed. This could honestly be the first and last tip I give in this article.

Someone needs to see this thing all the way through. The writing is key. You have a good base and everything is bread and butter right? Well, when you have about eight hours to write a five- to seven-minute short, the script is not going to be infallible. Your team is not going to see the vision intended.

Take critiques, have a read-through that night with EVERYONE, and take what you can use but hold on to what you intend, because what people view on the page is going to be very different from the visual product.

Our Director of Photography Andrew Raymond was livid when I presented him with a 10-page script. “Are you fucking kidding me? You’re trolling me right now Jeremy.” The worst part was after the rewrite it was still 10 pages. I knew it was a lot, but there were places where I could cut it down with Andrew (who would also be our editor) in post. Make shots quicker and trim the fat. It’s better to have a slab of marble to chip and cut rather than a stone to try to stretch.

In the instances you hand it off to someone else in production, they could completely miss what the audience is supposed to get from your film story-wise. I personally believe every director should write what they shoot. A vision executed purely from conception to completion. The beauty of the 48 is you could do it in a weekend. No matter what, the director should have input in the writing to make sure what is being written can be done in a timely fashion. Two years ago we wrote a romance that took place on a spaceship. I don’t know what the fuck we were thinking. 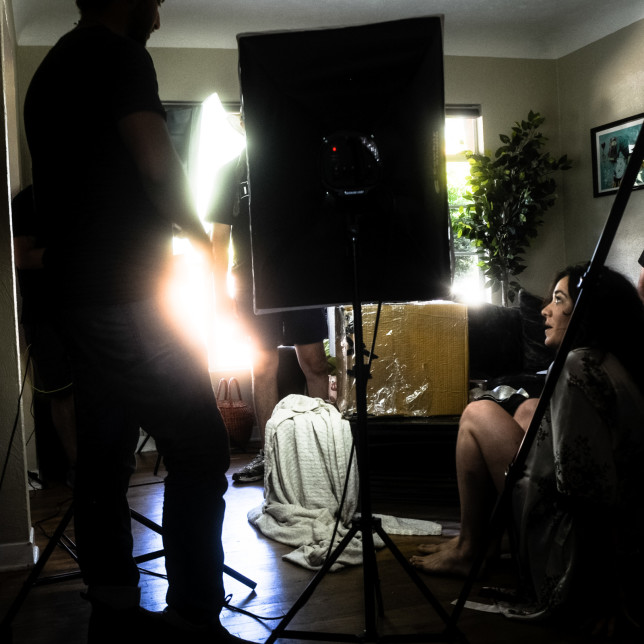 Make sure everyone knows their roles.

Do everything and everything else. Yes, do what is expected of you as a director, DP, producer, actor, but understand that is not your only role. You encompass the project as a whole in your role. Doing more to make someone’s job easier makes your job easier. It’s a spiral. Sometimes just cleaning a toilet as a director is a lot easier than asking someone else to do it. Trust that your team members will get certain things done but be willing to take anything on yourself. Once again, creating a conducive happy production experience just makes for a better film. Whispering love into what you create is far better than yelling hate.

We are equals on the 48. This is a very socialist approach that I normally wouldn’t advocate.

This is a wildcard. It’s so hard to get good actors. I highly recommend starting this process far before you even have a team or an idea for a script. Having people who can act will get your crew pumped on production. We managed to cast Hannah Kauffmann, Erin Phillips and Alex Knight from Tricklock Company. Once we started rolling and saw how good the actors were, everyone lit up with anticipation. The vision truly came alive and everyone on that set was 110% on-board with what we were doing.

I got stage actors simply because of the time restraint of memorizing lines. GET stage actors. There are far more of them willing to be on a 48 production than film actors. Albuquerque has a fantastic theater scene, use it. We just lucked out and got the best of ’em. 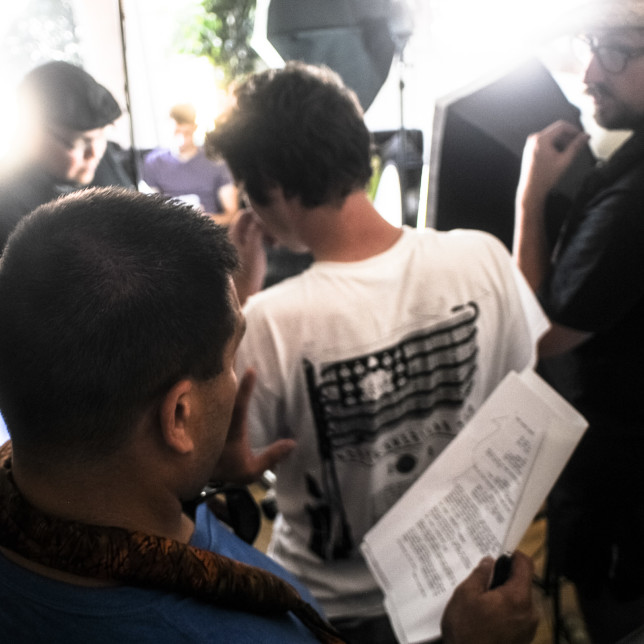 Get someone to score your film.

This is even more of a wildcard. Personally, as a filmmaker, I am very driven by music. I NEED original music. I knew when I was first putting this team together that I had an astoundingly talented musician to do this for me, Kyle Ruggles. So in this respect he was in charge of getting the musicians, equipment, and master recording to me by Sunday. I sent him my inspirations and the tone I was going for, and he recorded it in a living room.

Don’t be too involved in this process. There’s not enough time to sit there and produce music with a band. Get someone you know has the means and is willing to create something original. Shit, just get them to lay down some drums and weird guitar on separate tracks.

If you can’t get original music, go online and download some public domain stuff. You need to have something.

This is an arbitrary list. You never know what’s going to happen when you make a 48 Hour Film; it’s war. I had a moment where I asked myself, “Why are we doing this? Why do we submit ourselves to this kind of torture?” Because we need this. I love having a weekend where we can have a plethora of creative individuals making something amazing. Or at least what you perceive to be amazing.