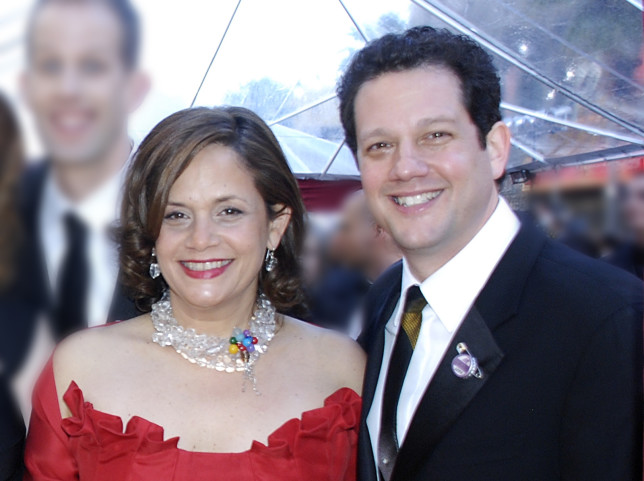 Award-winning composer Michael Giacchino on the red carpet with his sister. Photo by Pulicciano. Cropped by Pyragraph Staff.

Guest Blogger Ian Temple is a pianist, entrepreneur and professional musician. This post originally appeared on Flypaper and is published here with kind permission.

Anyone who knows me at all knows how much I love Pixar films. The Incredibles is still one of my favorite all-time movies. Ratatouille made me see the world differently. Up had me bawling like a child within the first 10 minutes. And no small part of that was the music.

I only recently found out that the music to all three of those films was composed by the same guy, Michael Giacchino, who also wrote the music to Lost, the new Star Trek films, Cloverfield, and a ton of other things. He’s won an Academy Award, multiple Grammys, an Emmy, and a Golden Globe Award. The man clearly knows what he’s doing with a soundtrack.

I just stumbled across a wonderful interview with Michael by David Garland for WNYC (embedded below), in which he talks about his process, how he got his start, and the music behind three upcoming films he worked on. The interview has some wonderful lessons for musicians (like me) who aspire to put music to moving images in a way that will truly affect an audience.

1. Every Film Should Have Its Own Sound

One of the things that Michael talks about a lot is his overarching goal to create a distinct sound for every film or TV show he works on. If you think about many of the films that stand out to you most, you can hear a distinct sound associated with those films, whether it’s E.T. or the James Bond movies. This is one of the things he strives for in every project he takes on—so that the audience can hear a certain sound or type of music and immediately recognize it as belonging to that film or show. For example, think of Mission: Impossible. Anyone who hears that high-pitched bell sound or fast-paced, 5/4 rhythm immediately knows what they’re listening to. (Michael used it as inspiration for The Incredibles, though you can also hear the differences, especially the jazzy whimsy in the latter soundtrack.)

2. Be Ready When Opportunity Knocks

Michael tells an anecdote about getting his start that I really liked. He was making music for video games when a friend asked if he would make a quick musical mock-up for a meeting with Stephen Spielberg about a game for The Lost World: Jurassic Park. The meeting was the next day, but Michael pulled something together. After the meeting, Spielberg called him up and asked him when they should be booking the orchestra. Michael had never worked with an orchestra before (at least in a professional way), but he went for it anyway, and of course it turned into an incredible launching point for him. The Lost World: Jurassic Park was actually one of the first live orchestral scores for a video game.

3. Always Come Back to the Emotion of the Story

One of the things Michael loves to do is play around with different, unique sounds and effects. The soundtrack for Inside Out (the new Disney/Pixar film coming out this summer) includes tons of unusual sounds, like reversed cast iron bowls and boobams, but Michael emphasizes that you can never let this stuff get in the way of the emotion you’re trying to portray to the audience. It always comes back to: What’s the emotion called for in the story and how do you achieve that?

There are a few other things that Michael seems to do through his works that really jumped out to me. These were a couple:

Take a listen to the results of all these lessons, with Michael’s amazing theme song for Up: