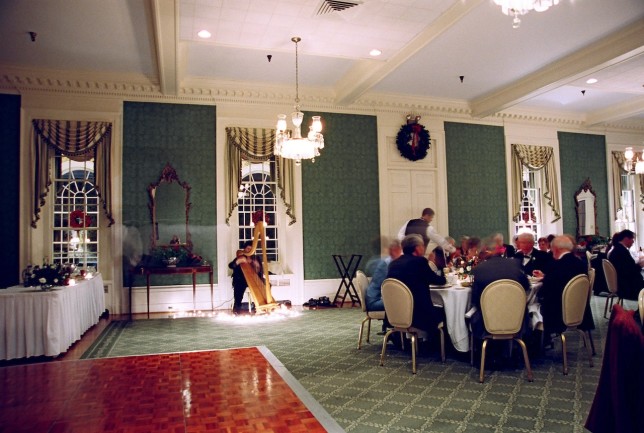 This post was originally published at Monica Schley’s blog and is reposted here with kind permission.

Summer’s almost gone. And I was busy! It comes as no surprise that harpists find a fair amount of private gigs during the summer months, particularly weddings. Even though it’ll be quite a few months before most of us have to play outdoors again, I thought I’d share some of my experiences before they are forgotten.

Here’s what I’ve gleaned in the past decade or so of doing this sort of work. You’ll want to make sure you have the obvious—your harp! (or other instrument). I have five core things I always need at any gig: harp, bench, stand, amp and cords.

Its summer. You will get thirsty. If it’s a long drive, you will be parched before you even arrive. Don’t buy a Coke while you wait for the ferry. Bring snacks like an apple and trail mix, which travel well and give you natural sugar and protein. Stay away from too much caffeine (like coffee, which will make your palms sweat anyway) because it will make you crash, something you don’t want while you’re in the middle of playing.

2. To smile and help out

Be friendly. It’s someone else’s special day. You’ve been hired not just to play music, but to spread positive vibes all around. It hardly needs mentioning that if you’re a sourpuss other vendors won’t like to work with you either—and word spreads. If someone needs help and you’ve finished your work for the time being, think creatively for solutions. I once played a wedding gig where the officiant’s clip-on mic didn’t have any amplification! The venue, the event planner, and the DJ all thought the other person had an amplifier. They didn’t. But I did! My little battery powered amp that I can’t stop raving about has two lines in, so we plugged in the minister, and voila! No one else but us performers knew there was a potential disaster in the wings.

3. To know some Irish songs

You’re a harpist. Everyone associates Celtic music with the harp—it’s the national symbol of Ireland for heaven’s sake! Even if it’s not your forte, even if you prefer anything but Irish songs, people will want to hear you play Celtic songs. It never fails that every year I have an entire wedding of Irish songs. Have a solid set of jigs, ballads, reels, hornpipes and airs.

4. An extra tuning key and tuner

This is tricky. Playing outdoors can be very dicey, especially in the Pacific Northwest, where precipitation in some form is expected daily 10 months of the year. Ask questions ahead of time. Do they have a rain plan B? Plan C? Through experience I’ve come up with a personal policy that works for me: I don’t play outside between October 1st-April 30th (unless there is heated covering, which, in that case, the event might as well be indoors).

Figure out a comfort zone that works for you. This might mean educating your clients about the dangers of extreme heat on the harp, or the dangers of cold temperatures for you as a musician (cold muscles = injury). It might mean asking the venue if there is a tent. Over the years, I’ve learned to stay away from unsympathetic clients who book in venues like city/county parks that have no on-site resources, no shade, exposure to elements, etc. 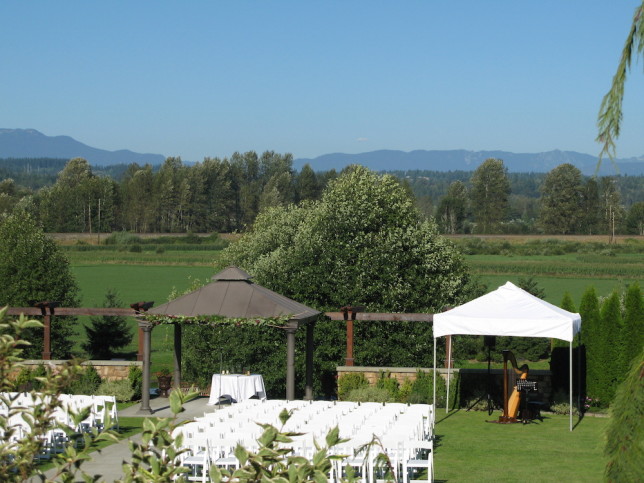 Protect your instrument at an outdoor wedding. Photo by Monica Schley.

Memorize it or bring more music than you think you need. I have binders for three main genres: classical, Celtic, jazz standards. Brides and grooms get stuck in traffic. Limos break down. Someone forgets the rings. These have all happened to me, and rather than keeping up that 10-minute vamp to “Jesu, Joy of Man’s Desiring,” I modulate to something memorized or in my books. Its a skill worth learning.

Know of any handy nearby music stores that carry your preferred string brand—or any harp strings at all? Neither do I! It is rare that even the most well-stocked music stores will carry decent harp strings. And even if there is a store nearby, it may not be open. Enough said.

I use a heavy rug or a board with a rug over it to place under my harp. Uneven, damp ground is unpredictable and can be rough on the harp, not to mention unbalanced, thus making playing with pedal changes real tricky. I have a square, thin piece of plywood that does the trick under a carpet remnant. Both are very cheap. In a jam, a car floor mat can suffice in a forgetful emergency.

You must have something to pin back your music. Even with sheet protectors, the wind will blow your music. Clothespins are cheap and sturdy and let you turn pages.

Have a contract or some other written agreement. Live and learn. Go without one and one day you will get burned—either lack of pay, less than negotiated (“Oh, I only have $150 cash on me, is that okay?”), bounced check, double-booked with another musician, you name it. Even well-minding clients will forget money or a checkbook, but you’ll still have your phone bill due on Tuesday. I believe in the law of attraction (the energy you send out is the energy you receive), but I’m also not naive. A contract shows your clients you mean professional business, and it protects you from lack of payment. Plus, you can negotiate your other conditions like parking, sheet music fees, gas mileage, meals, breaks, outdoor conditions, etc. General contract templates abound online if you don’t know where to start looking, or contact your local musicians’ union.

Monica Schley is a musician & poet living in Seattle, Washington. Her poetry has appeared in Burnside Review, Cranky, Cream City Review, Seattle’s Poetry on Buses and KNOCK. Her poetry chapbook “Black Eden: Nocturnes” (Pudding House Press) was published in 2010. As a classically trained harpist, she steadily works on recording, teaching, playing private events and public shows. She has performed with jazz luminaries, pop stars and indie rockers. She sings and composes for her band The Daphnes and she’s also a Certified Clinical Musician.

View all posts by Monica Schley →