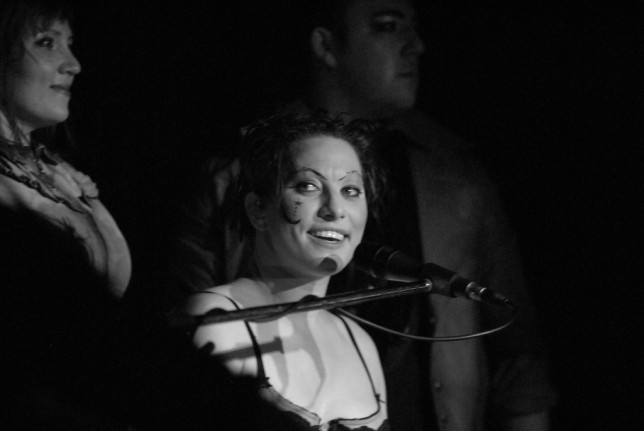 Social media is a chore for you (okay, me). But why? Because you’re (I’m) doing it wrong. You know who’s doing it right? Of course you do. Amanda Palmer is doing social media right because she doesn’t look at it as a chore. She has cultivated a great ongoing relationship with her fans, whereas you’re (I’m) focused mostly on broadcast, and not enough on—gasp! wait for the lightbulb moment—conversation.

Watch this: Social media can improve your relationship with your community, but only if you use it at a tool to cultivate ongoing relationships. Right now social media is boring to you (me) because you’re (I’m) probably writing mostly posts that say, “Heyyyy, come to my show, I got another show, check it out,” out of a sense of drudgery. And boredom. You’re (I’m) broadcasting into the void and it all feels very lonely like an existential crisis.

She posts often. Most importantly, she responds. She replies. She’s always available.

But just imagine if instead of writing these boring posts that bore you and almost certainly everyone who reads them, you wrote interesting posts that sounded as though an actual person wrote them, and people commented? And you responded? And they responded back to you? And you connected with people? Wouldn’t you be excited to check your Twitter? Wouldn’t you be happy to check Facebook and talk with the people who care about you? Yes, why yes, you (I) would.

Did you know that you can have a conversation with someone—like, a specific person—who likes your music? Did you know that by talking with people who like your music, through magic social media tools, you can build your community? You totally can! I know this because I follow people online who do it. And yes, okay, it has been happening with me too, lately, but on a smaller scale.

When you look at it this way, as an ongoing, exciting conversation (who doesn’t like talking to people who give you compliments, I mean really?) it becomes much less of a chore.

Now let’s shift to all the great people I’m stalking online and elsewhere, whose secrets I’d really like to steal.

I recently read to Amanda Palmer’s The Art of Asking, after everyone else did. And if you haven’t read it yet, you should. Because you’ll learn something really important (and simple and easy to remember). The biggest thing an indie musician such as yourself can do is to create solid relationships with the people who love your music. And when you read this book you can find both small and not-so-small things to incorporate into your own relationships with the people who love your music, even if you’re not as warm and open as a beaming-heart-chakra type of person like Amanda Palmer.

Another, maybe even better way to learn from Amanda Palmer is to watch her in action. I contribute one dollar of over a whopping 33 thousand she currently receives for each thing she makes and posts on Patreon. (People are contributing money to my band’s Patreon page, too, but yeah not that much.)

The biggest thing is that she blogs a lot on Patreon—she pops in often, talking about how she’s doing and where she’s at emotionally, checking in way more often that when she has a song ready to share. She clearly loves doing it. Lately, she’s been sharing the heartbreaking news of a lifelong friend’s death. People comment on her posts, connecting with Amanda and also with each other. It’s a pretty magical community over there.

She loves her fans and they love her back, so hard.

Shannon Curtis is also really great at connecting with people. She does a bunch of cool things online to keep in touch with her community. For example, she puts together contests. When someone screen-printed a handful of Shannon Curtis T-shirts, she put together a contest to give them away.

For another example, she makes music videos including her community. She’s done this on more than one occasion. One of her videos, I Know, I Know, went viral. Everything Shannon does—even the name of her album, Connections—seems to have the goal of connecting with people.

Tonya Kay, The Most Dangerous Woman in Hollywood

Tonya Kay is really great at connecting with people, too. I interviewed her a while back about drawing clear boundaries and keeping the creepers at bay. The first step, paradoxically enough, has a great deal to do with making yourself available—in a safe, public space—to the people who admire what you do. Make sure you read the part where she talks about how she started an online forum for her fans to gather, before social media was even a thing! This is how smart she is.

She is on top of her social media shit. She posts often. Most importantly, she responds. She replies. She’s always available.

Steal all the tricks you want to steal. Remember you’ve been given an opportunity—nay, many opportunities!—to have a real, live, ongoing conversations with actual real, live people in your community.