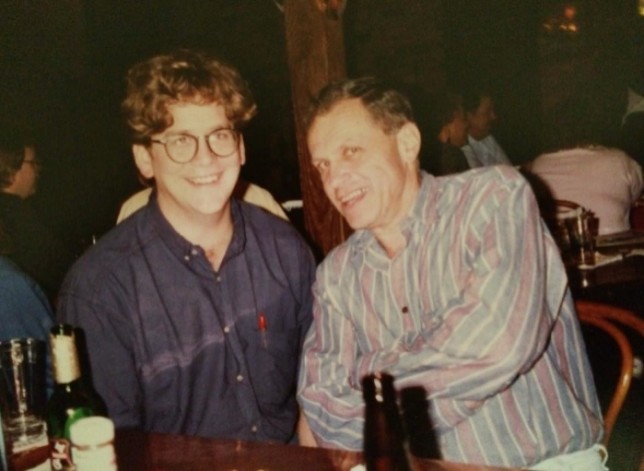 Andy Wallman with Harvey Gabor, one of the real Mad Men. Photo courtesy of Andy Wallman.

This post was originally published on KW2Ideas.com and appears here with kind permission. Written by Andy Wallman, president and executive creative director of KW2, an award-winning advertising and digital agency based in Madison, Wisconsin.

Oh, I tried. I really did. But I only watched the first season and a half of “Mad Men.” It was interesting to me because of its place in the history of advertising. My grandfather owned Moore & Hamm, an ad agency on Madison Avenue in the 1930s and 40s. They had Four Roses Whiskey, The Stork Club and some iconic New York brands. And I got into the business in 1989, so the Mad Men era was cool to me because it landed between my grandfather and I, between the US advertising industry’s earliest days and my earliest days in the business.

A burst of bloodly little dots shot across the page. He bled for his work!

The real ad references in “Mad Men” were fun to watch, like the episode with the Kodak Carousel pitch, and at the very end of the season finale, where they suggest Don created the Coke “I’d Like to Teach the World to Sing” ad. But I didn’t I like how the show made creativity look instantaneous. In thirty seconds, Don Draper could solve massive problems. It’s never been like that.

I should know because I worked with one of the real Mad Men who really created that Coke ad for McCann Erickson in 1971.

Harvey Gabor was my Creative Director (CD) when I worked in Detroit. He was the real deal, and a big inspiration for my creative career. So here is just a little taste of a young guy’s experiences with Harvey and a few of the real Mad Men who TV recently popularized.

I got lucky very early in my career. A few months after I started, one of my first campaigns wound up on the cover of AdWeek. It was for the Wisconsin Department of Transportation, featuring a rad 80s teen dude explaining Wisconsin’s “not a drop” underage drinking law to the hip-impaired (parents). The publicity resulted in a phone call from a headhunter asking if I wanted to interview for a couple of jobs in Detroit. I had no idea what a headhunter was and thought it was one of my friends pulling a prank. Soon, I was on a plane, in a suit, amazed, and on the way to interview for a job in Detroit at Simons, Michelson, Zieve (SMZ).

They offered me the job despite the fact that I wore a suit (lesson number one: creatives don’t wear suits, the account service “suits” wore suits) and I had a very stupid portfolio.

The Detroit experience was fantastic. About 80 people worked there, compared to 10 at the Madison agency where my career began. Our bread-and-butter anchor account was Big Boy, which was a lot of fun work. I also wrote for Detroit Edison, AAA and Ziebart. It felt like a big deal ad agency. A few folks smoked in the shop, we had big budgets, and people across the large office really knew advertising.

My first day was thrilling. The creative department had a little welcome meeting where I met my co-workers and got a taste of our clients and work. At the end, they insisted that I do an impersonation of Mort Zieve, the CEO. He made the rounds through the shop every day, and they said he’d be in the creative department soon. They coached me on his accent and mannerisms, and told they me that if I said, “Hello, hello, hello Zieve, how are you?” when Mort walked in the room, I’d be forever in his good graces. I couldn’t tell if they were setting me up and this would be my last day or if this would really be a cool thing to do. A minute later Mort was on the way down the hall, and I was ready to impersonate the big cheese. Mort walked into my boss Larry’s huge office, and I said “Hello, hello, hello Zieve, how are you?” He burst out laughing, knowing that the others put me up to it. I was in.

Shortly after I started, the search began for a new Creative Director, which was very exciting. The creative department got to watch the reels of TV commercials from the finalists.

We popped one of the enormous 3/4” tapes into the U-Matic player and watched a reel from a guy named Harvey Gabor. Word had it that he was a big deal, but we didn’t know why. He had a couple older ads and the new Converse ad with a little toddler tromping in a meadow wearing Chuck Taylors. Then our jaws hit the floor. The last spot on his reel was that Coke ad, “Hilltop.”

We had all remembered that ad and that song from our childhood. It was legendary! The song was on the radio! Holy crap! I was very green, but I knew that THIS guy was the really real deal.

Harvey took the job and made an instant impact on the whole company. He was a character, frequently in a suit with suspenders. He knew our creative wasn’t spectacular and immediately took steps to fix it. He called a meeting of the creative department in our stately dark conference room. He drew some rectangles and squiggles on two pieces of paper. He said, “I think we’re trying too hard on our print ads, and we need to make them simpler. So from now on, I only want to see two kinds of print ads here—a big picture with a little headline or a big headline with a little picture.” I thought it was a great meeting. The art directors hated it. But he was right.

Harvey and I concepted together on one of his first days. We were the incumbent on the Ziebart and were under pressure to win it. Management announced, “If we don’t win, there will be layoffs.” Gulp.

So there I am, a newbie, with one of the legends in advertising creating TV commercial ideas. Harvey was at his desk, and I was seated on the other side. He had a ball point pen, and a pad of onion paper, really thin stuff. (For those of you not in the business, a ball point pen is not the best tool for sketching out ideas on onion paper.) The guy was intense when concepting. Very likeably intense, with a driven, manic focus on coming up with idea after idea after idea. I loved concepting, tossing out option after option. To be doing it with a legend was blowing my tiny little mind.

Five hours of work and four hours of drinking? No wonder Draper was such a mess.

A few minutes in, Harvey started drawing a rectangle on the onion paper, didn’t like it after about one inch, and tore three pages off the pad, crumpled it all up, and tossed it on the floor. This happened a few times. He went through a lot of paper. He was so intense, he would push through five sheets of paper while sketching stuff out.

More ideas came. One was a bunch of kids with ice cream and dogs and bubbles and messy stuff, coming out of a car like the clown car gag at the circus. Harvey called this a “torture test” ad. Then he was staring at the white pad of paper, and picking a hangnail on this thumb. Picking and flicking at it with his index finger, like a guy who needed an idea NOW. Then, splat. A burst of bloodly little dots shot across the page. Harvey tore three pages off the pad, crumpled it all up, and tossed it on the floor. He bled for his work! He tossed paper wads on the floor, like in the movies! I thought that was so cool.

The best compliment you could get from Harvey, in his heavy New York accent was, “That’s, that’s, that’s…pretty good.” I don’t think he had a word for “great.”

I wish I would have been able to work with Harvey longer, but eventually my wife and I decided to move back to Wisconsin. At the going-away party, Harvey gave a nice toast to “the kid from Indiana.” I had told him several times that I was from Wisconsin, but whatever, it was okay coming from Harvey.

Thanks to some luck and the internet, I got to see Harvey again in the form of Google’s wonderful 2011 campaign called Project Re:Brief. They brought back famous ad folks and their ads, and teamed the old timers up with Google employees to reimagine their classic ad for today’s banner ad world. Harvey was one of the classic Mad Men, and “Hilltop” was one of the ads they “recreated.”

It was really nice to see Harvey again. He was greyer, but still quite sharp. In the first couple of seconds, you clearly saw the twinkle and spark that made being around him so special. I laughed out loud at his line, “I took the temerity of doin’ a scribble.” That’s Harvey, the completely brilliant yet completely humble everyman.

Over the years in Madison, I got to work with a couple of other guys from the end of the Mad Men era, Dick Kallstrom (who did the famous Sears Die Hard car battery on a frozen Minnesota lake) and Mike Kelly (creator of the Golden Grahams jingle). Dick was an art director out of Chicago, and Mike was a writer from Minneapolis.

Their stories of the Mad Men era of advertising were frequently steeped in alcohol. He said the Chicago Mad Men would take the train to work, arrive around 9am to create for two or three hours, have a two-hour lunch, then work another two hours back at the office, then head out to a bar. Every. Day. Five hours of work and four hours of drinking? No wonder Draper was such a mess.

But somehow, despite the martinis and abbreviated work days, the 60s and 70s ad guys I worked with knew their craft incredibly well, perhaps because the sandbox was smaller back then. Digital communications have exploded the size of the sandbox and seemingly created more creative generalists. But man, they all had great passion, great experience, and great wisdom.

Working with Mad Men taught me a valuable life lesson: Listen to those who came before you because they know the stuff that you do not. Take what they know, add it to what you know, and make yourself better.

Thanks, Harvey, Dick and Mike for helping me try to do just that.

For more stories from Harvey, including his take on the Coke and Google ads, check out his two short e-books, Confessions of a Prehistoric Adman: From the Bronx to Madison Avenue and Lots in Between and Peeing with David Ogilvy: Short Stories from my “Mad Men” Years.