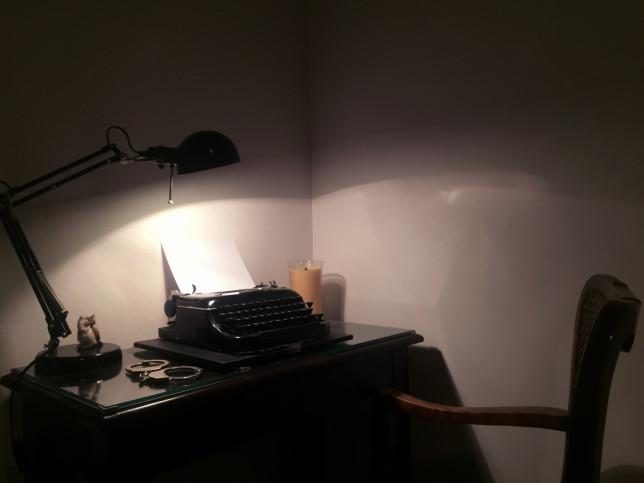 When I tell people I’m a writer, more often than not they are a little jealous of how incredibly happy I must be, spending my time with something they assume I love more than anything. I’m a nice person so I don’t go ahead and punch them in the face, but boy do I want to sometimes. For no, I do not love to write, not at all. I hate it. It is the fucking worst. Self-proclaimed alcoholic asshole and genius storyteller Dan Harmon once compared it with being raped by god in a prison cell and although I’m not that big on exploiting horrible crimes for the sake of humor—or as a plot device for that matter—I still find myself agreeing with the sentiment. For writing is no dance with fairies, no orgasm on coke, no purring kitten in your lap. It is torture, Ramsey Bolton style.

All that matters is the feeling of pure joy that comes after. For that, I’d do anything.

Don’t get me wrong. I could not be anything else but a writer, ever. It is my nature, for better or for worse. Also, as much as I hate the process I love the result. Having written something, even if it is far from genius, is the most rewarding thing I know. Nothing compares to it. But writing itself hurts so much I might as well be flaying myself while riding an angry lion through a blazing fire. It makes me cry and scream and rage and suffer. Part of it surely is anxiety and pressure, but that can usually be dealt with by applying some of the advice kindly given in various essays on the topic. But writing also feels terrible because the process is painful just in itself and there is nothing much to do about that. Except this.

I usually follow a strict regime that I designed solely to make me believe I like writing fiction. I spend the mornings answering emails, commenting on topics in social networks, researching for my day job as a freelance reporter, doing bookkeeping and the like. Stuff that uses writing as a device without being essentially about writing itself. After three hours of this I almost crave something more creative than spreadsheets. Sure, fictional writing doesn’t miraculously become a bath in chocolate and candy just because something else is worse, but it nevertheless seems much more sufferable after repetitive, often mind-numbing work. Creating a context in which fictional writing seems like the better option is my go-to solution.

It isn’t always as simple as a handful of tedious chores of course. Much trickery is needed to convince my ever-reluctant brain to concentrate on writing. So to help the cause, I will often consume the worst books, essays, short stories and poems I can find. And I don’t mean the kind of guilty pleasure reads you wouldn’t tell your smart and funny friends about but still enjoy without true shame. I’m talking about really, really horrible examples of the written word, rambling pieces of shit that somehow still got printed, stories whose protagonist have neither motivation nor meaning, talk in cliches and act like puppets. Books so lame and awful I cannot help but want to sit down and do better just to defy them.

If just consuming shitty authors won’t help, I sometimes try to be like them. Heeding the advice of aforementioned Dan Harmon I just write crappy, awful shit. Ignoring the rules of storytelling and style I scribble down the worst ideas I can come up with. Moreover, while doing that I allow myself to revel in that special hatred I reserve for my chosen profession. Allowing those negative feelings to take center stage without the danger of them ruining something that otherwise might have been a lovely text is a healthy way to rid yourself of at least some of the pain.

There is another nice side effect of the crappy-writer routine: Being bad on purpose feels surprisingly freeing. It is an unexpected ailment for wounds inflicted by constantly laying yourself bare and trying be your best ALL THE FUCKING TIME. Because you can’t. It is impossible to always be on your top game and allowing yourself to fuck it up on purpose makes it so much easier to accept those times when it happens accidentally.

I don’t believe in negative reinforcement when it comes to others, but when I inflict it on myself, it occasionally works wonders. So If nothing else helps and I won’t write, no matter what, I simply chain myself to the desk. Seriously. When I’m at my lowest point, in those moments when every word seems as unconquerable as Mount Everest, I switch off my phone and the wireless and get out the cuffs. If there is nothing else I can do, no internet to keep me busy, no household chores, no friends to call, no bath to take, if there is nothing but me and my screen, some weird inner programming takes over and forces me to write. I usually hand the key to my boyfriend who is quite relentless, thank god, so no matter how many blowjobs I promise, he won’t free me before time. But I wouldn’t hesitate from freezing the key in a block of ice if he was unwilling to take part in my craziness.

Sure, I could try to change my feelings and attitude rather than trying to deal with them by evermore escalating stunts ending with whips (metaphorically) and chains (literally). I could do therapy or read self-help books about how to channel creativity more healthily. But not only do I doubt the effects but I also fear them: What if I need to hate the process for the results to be good? What if that old saying about art and suffering being inevitably one and the same does have some grain of truth in it? I don’t know if it does but until I am ready to find out, I’d rather hate what I do and deal with it than run the risk of ruining the whole thing.

In the end, it doesn’t matter how horrible the process of writing might be sometimes. All that matters is the feeling of pure joy that comes after, this blissful happiness that is simply unattainable through other means. For that, I’d do anything. No matter how crazy.

Myriam Klatt is a writer from Berlin, Germany. Her short stories have been published in different literary magazines and she is currently working on her first novel. She also works as a freelance TV-Reporter, which allows her to pay rent and travel the world. She enjoys coffee, books and meeting new people.

View all posts by Myriam Klatt →