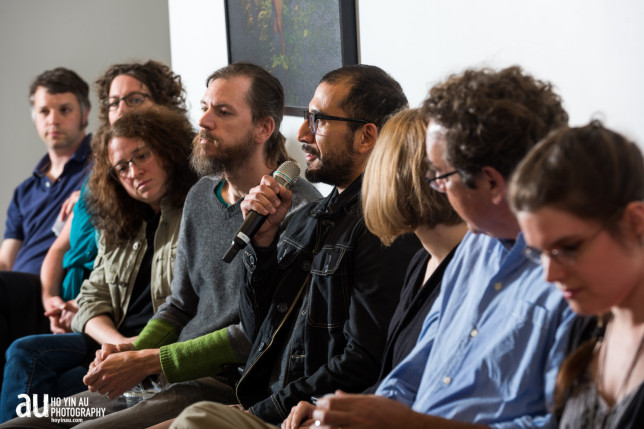 Guest Blogger Tim Devin is a co-organizer of Getting by in Boston. His projects address community, communication and social change. His work has been included in art and urbanist shows across the US, Canada and Europe, and has been featured in such news sources as NPR, CBC and the Boston Globe. This post was originally published at the Rise Industries website and is reposted here with kind permission.

Early June marked the first anniversary of Getting By In Boston, or “GBIB” for short. It’s a series of meetings, an online forum, and a handful of related groups all focused on organizing creatives, and exploring how creative people (artists, writers, musicians, etc.) can survive in our famously expensive little Boston. The whole thing is pretty DIY, with different people taking the lead when they want to. And, weirdly enough, it all grew out of a single event that took place last June 4.

Rising rents force us to move around, which makes us complicit in gentrification—another topic that’s gotten a lot of play.

That event, which Jason Pramas, Matt Kaliner and I put together, was supposed to be a one-off thing. It was called “How we get by,” and featured ten well-respected artists talking about how they make ends meet, and how they find the time and funds for their artwork. This was breaking some taboos, since creative folks don’t usually talk about how they pay their bills. First, it’s not how they identify themselves; second, there’s this weird notion that successful artists earn their keep from their art, so most people aren’t really upfront about the fact that they work—since it implies they’re not “successful.” So imagine everyone’s surprise when all but one of the speakers talked about their day jobs and their problems making ends meet. (Here’s an article I wrote about the event for the Massachusetts Cultural Council, and here’s Edmond Caldwell’s review of it for Big Red and Shiny.)

Over 100 people showed up for the event. There was a lot of energy there, so the next day, Jason, Matt and I set up a discussion group on Facebook called “Getting by in Boston.” After a few weeks, we also started organizing some follow-up meetings. Between the online forum and the in-person meetings, there were a lot of interesting discussions. And even some real-life outcomes.

More on the other meetings in a minute. First, what have the GBIB people been talking about? Well, there’s been a lot actually, which makes summarizing it pretty hard. But here are the four biggies:

(There’s no way I could do justice to the whole discussion, so if you’re interested in learning more, take a look at the FB discussion group.)

Then, There Were Meetings

Like I mentioned, there was a lot of energy after the first event. But what should happen next? Did people want to move forward and get organized? Or were there existing groups or organizations that we could get involved with? Or both? At the first follow-up meeting, the consensus seemed to be that there were some wonderful organizations working already, but that we should focus on some of our own needs. We met again a few weeks later at Aeronaut (which Jesa Damora helped set up, after our first location fell through at the last minute). over beers, we discussed how we could organize ourselves, and a few people like Jason Pramas and Nancy Anderson pitched specific ideas.

So what’s come of all this? Meet the GBIB Family. 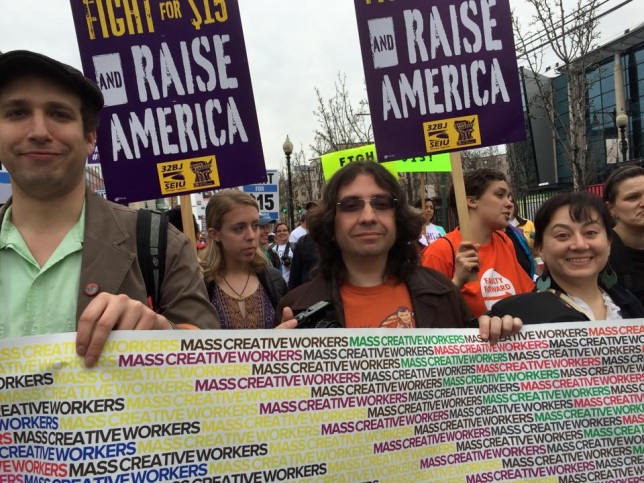 Mass. Creative Workers at the April 14 rally for living wages in Boston. Jason Pramas is in the center; Loreto Paz Ansaldo is on the right.

One of the ideas we heard about at that third meeting was Jason’s concept of an association to “take action to improve wages, benefits and working conditions in several creative industries.” A number of GBIB people signed on, and they began meeting regularly, calling themselves the Mass. Creative Workers. Among other things, they marched as part of the April 14 demonstration for fair wages in Boston. Anyone interested can go to their Facebook page for info on upcoming meetings and actions, or email them at masscreativeworkers@openmediaboston.org.

Nancy Anderson also pitched an idea at the Aeronaut meeting. She was concerned about how hard it is to find a place to show your work, since there are so many artists competing for precious little gallery space. She wanted to match artists looking for places to show their work with businesses with wall space. She’s since partnered with Somerville Open Studios, and is about to go live (stay tuned). Off the Wall is a complete service for both the artists and the businesses: It curates the work, handles arrangements (including selling the art), promotes both the artists and business-partners on social media, and rotates work on a regular basis. You can email her at canis_major@mac.com for details. 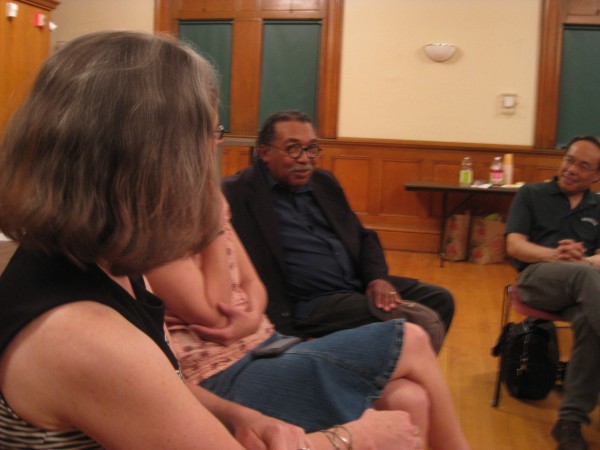 The first “how to be an artist and a parent” event. Speaker James Montford is in the center. Speakers not pictured: Paige Wallis and Stacy Thomas-Vickory.

“How to be an artist and a parent” series

One theme of the GBIB discussions is how to make ends meet, and still have time for creative work—something parents who are artists or writers or musicians feel pretty deeply about. This realization led Greg Cook and me to start a series for creative parents called “How to be an artist and a parent.” We’ve had two events so far, and there’s also an online forum here. The idea is to swap notes on how to juggle our competing interests, how to manage time better, and to maybe find ways to help each other out. If you want to get involved, join the discussion on our Facebook page, or motor on over to our website here. You can read Greg’s summary of our first event here, and my article about the second one here.

Another concern for GBIB folks seems to be a need for more community, and maybe some helpful motivation along with it. Be Be (aka Brenda Be) organized an event in Somerville last November along these lines, and called it “The Artists and Writers’ Mutual Aid Society.” She is currently reorganizing the idea as a regular series of monthly meetings. In addition to fostering community, this new group will be a place to find collaborators, share advice, and brainstorm. You can get involved by joining the FB group here.

Besides some discussion meetings, a few new groups, and a whole lot of online chatter, what’s actually been accomplished?

Each creative form has its own niche community in Boston. As a result, people who could be working together not only don’t know each others needs—they don’t even know each others names. So it was interesting to see GBIB bridge this gap for a number of people. “It started with the visual arts,” fellow organizer Matt Kaliner told me, “but the later meetings did connect with theater a bit, especially after the closing of the Factory Theater.” And once that gap was bridged, people started realizing the challenges they face were related. Matt again: “I was really struck by the similar problems across genres.”

It’s also become a place where people discuss social and political issues. Beyond all of this chatter—and, most likely, because of it—I’ve seen GBIB folks at rallies and open meetings on arts funding, as well as more in-the-weeds things like meetings on Somerville’s new zoning code, and talks on artist-led gentrification.

Besides these shows of force, this energy has translated into at least one win: a new grant category. At “How we get by,” Heather Kapplow mentioned that the Mass. Cultural Council’s grants program supports a large range of media—but didn’t really address interdisciplinary work. This is important, since interdisciplinary work is arguably some of the most innovative (since it plays with different forms) and the least supported (because it doesn’t fall into existing grant and exhibition categories).

After the event, a number of us (Philip Fryer, Andi Sutton, Kathleen Bitetti, Heather and myself) decided to approach the MCC. They were very receptive, and got back later in the summer to say that they’d expanded the sculpture/installation category to include “new genres,” which is specifically designed to provide an option for those working across disciplines.

Which I think is a lot for one year. But then again, I’m biased.

What’s Going to Happen in the Next Year?

The group has been going off in different directions lately, but that seems like a good thing. People are getting down to working on the part of the problem they think is the most important. So if one of the four existing groups appeals to you, get in touch! We’re all pretty open people.

But of course, there are tons of issues that affect us here, so if something’s bothering you beyond those four issues, we hope you’ll bring it up on the forum. Maybe others will agree, and we can get started on it. Let’s make it happen.