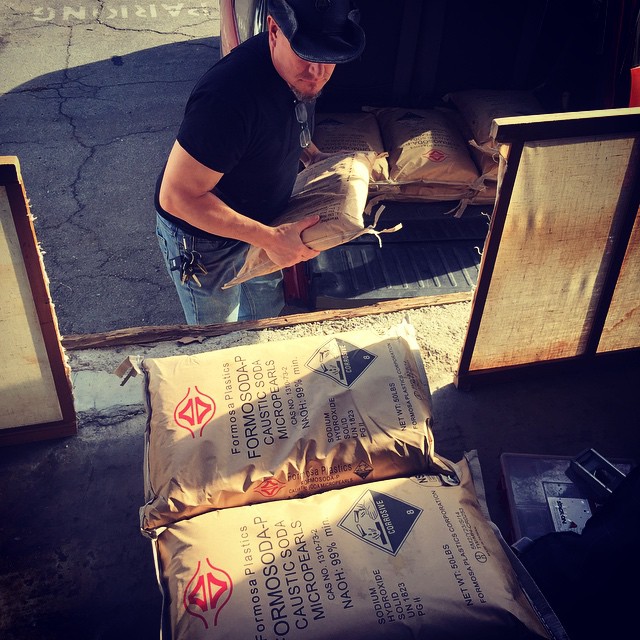 Now we can afford to buy lye in bulk, 500 lbs at a time. Photo by Danielle Vincent.

About a year ago, I got an email from my friend asking if I could lend her $5. I thought, “Well heck, sure.”

It turned out Kerri (owner of Marion & Rose’s Workshop in Oakland) was raising $10,000 for a crowdfunding loan through Kiva Zip, a pilot program from the nonprofit organization that usually crowdfunds micro-loans to third-world country business owners.

Unlike other crowdfunding platforms, any money lenders who contribute will be repaid throughout the duration of the loan (usually 24 months), and no incentives are necessary. Unlike other business loans, the interest rate on a Kiva Zip loan is 0% and you don’t need good credit or a business plan to apply (but you do need a lot of friends).

As co-owner of Outlaw Soaps, a small business selling handmade soaps, lotions, lip balms and more, I was immediately interested. Here was a way I could easily and quickly afford to take advantage of bulk pricing on supplies (which reduce individual item costs) without taking on more personal loans or committing to lots of interest (what’s the point in borrowing money to save 10% if you’re going to be paying 10% interest on the loan?).

Without giving it much thought, I filled out the application for the loan. I wrote my friend and asked her about her experience and if there was anything I should expect when/if I got approved.

She had a few pieces of advice:

It took me a few days of real thinking before I decided that even if I had to take on another job to pay back the loan, I would commit to paying it back in full.

I published the campaign. Zing.

Pretty much immediately, I started emailing friends and family, posting to Facebook and Twitter, and generally getting the word out. For every new Kiva lender, Kiva would match their loan 100%, so I really only needed $2,500 in “new” money, right?

Much to my surprise, people started immediately responding! People were lending money faster than I could keep track of it, and less than 24 hours later, I had my first fully funded $5,000 Kiva loan.

In that first 24 hours, a few surprising things happened:

I have heard (and seen in some of my friends’ loans) that we broke all kinds of records in a 24-hour fundraising sprint. This is ENTIRELY thanks to the generosity and support of our friends and customers. I think some people lent thousands of dollars (which is why the numbers just poured in).

And that was that!

Within a few days, the $5,000 was in my PayPal account (all the money goes through PayPal). The loan was complete, and now I just had to repay it.

So every month, on the 1st, I pay $208 through PayPal, and every month, the lenders see a tiny bit of money accruing in their account (which they can withdraw any time). The loan will be fully repaid 24 months after the funds were deposited in my account.

Our goal has been to stock up on our supplies at bulk prices, and basically spend no money for the rest of the year. Zing!

We achieved what we hoped to achieve, which was buying supplies in bulk at reduced cost. Yay.

But what we didn’t really take into account is that we would have very limited cash flow to sustain us throughout the year until Christmas (our big season). I’ve had to put some expenses on credit cards, which means I do get interest—a much higher interest rate than I would be paying if I just took out a real business loan.

So then I wonder if I should take out a bridge loan to get us through until Christmas, but then I’m even more in debt, which is something I fear more than spiders riding snakes into sharknadoes.

Given that I hate sharknadoes (especially sharknadoes filled with spiders and snakes), I have had to take on some side contract work to get us through until the orders pick up pace. Which is lame and sad, because it takes me away from my business, and my business is the whole reason I took out the loan in the first place.

If I had managed the loan better and only bought some items in bulk (instead of all of them), I could have kept some of the loan money as a reserve for emergency supplies, craft fair dues, etc.

But has it been a valuable leverage tool? Absolutely.

Do I recommend it to other small business owners? Yes, with the caveat that they need to really think through what they’re going to do with the money before the loan is approved, including any unforeseen things that might come up, and exactly where the repayment money is going to come from.

Since I had a very good experience overall, I’ve talked with some of the people who run Kiva Zip here in the Bay Area (they even came to visit us at the Renegade Craft Fair in San Francisco).

Before Kerri sent me that email, I thought Kiva was only for micro-loans of about $200 for poor small business owners to buy some meager supplies and eke out an existence in a third world country. Kiva Zip is the new domestic lending program for US-based businesses.

I had loaned money through Kiva in people’s names for Christmas and stuff, since I know some of my friends and family would rather donate $20 to a small business than get a $20 tchotchke. It seemed like a noble cause, but that was about it. I never expected to see the money again.

And it turns out, I’m not alone in that.

Most of the money that is loaned through Kiva stays in their system, being recycled into other small businesses. Once people have “spent” the money, I guess they don’t miss it.

$3.3 million is loaned every week, and 95% of that $3.3 million is recycled money from loans that have been repaid. When I heard that, all of a sudden the business model made a lot of sense…I mean, they just have this huge pool of cash floating around cycling through businesses.

In the two years since the Kiva Zip (domestic loans) program started, 1,500 loans have been funded, with a 90% repayment rate.

Kiva Zip focuses on artisan companies like ours who have a very strong, loyal and enthusiastic customer base, but not a lot of experience raising capital. If we hadn’t received this loan, I probably would have just not scaled up as quickly, and we’d still be scraping around to get enough supplies to fulfill even the most basic orders. Or maybe I would have taken one of my friends up on the “No, seriously, take my money, please” offers.

Last week, we just sent our first order to Whole Foods and are preparing to get our soaps into three other Northern California Whole Foods. It isn’t all because of the loan, but the loan certainly helped.

Find out more information or apply for a loan through Kiva Zip.