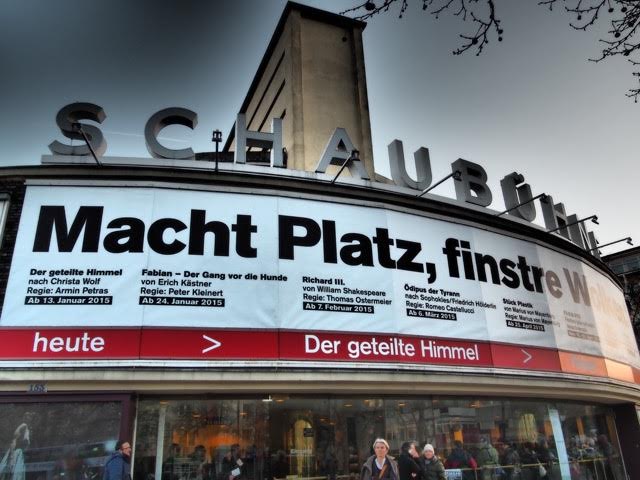 It’s 5:30am, and I begrudgingly break out my trusty Star Wars mug, filling it with three shots of Nespresso. It’s 11:30am in Europe, where actor Lars Eidinger is currently shooting a German film exploring WWII’s effects on Europe. This is after he just swooped back from theatrical performances in Canada. I message him that I am much more interesting than the French reporter he is Skyping with, secretly very grateful to have the chance to speak with him.

He’s a very busy boy, and quite undeniably one of the most enigmatic theater actors in the world. I first saw Mr. Eidinger in the title role of Thomas Ostermeier’s production of Hamlet with the Schaubühne theater in Berlin. The production stopped by London’s Barbican theater for just a weekend, where I was then studying at RADA. We were forced to see the subtitled phenomenon as a part of our coursework, thank the stars. Not only was this was the best Hamlet I’ve ever seen, but most likely the best theatrical production I’ve seen. Ever.

If this Hamlet is so groundbreaking, why hasn’t it, or Mr. Eidinger, come to the US?

This Hamlet went there—places you didn’t want it to go. Both Michael Billington and Lyn Gardner, critics extraordinaire of The Guardian, commented on these qualities in their reviews. The aliveness was startling. Hamlet actually hit his head on a balcony when climbing over seats in the theater, bleeding. Or did he? Some called it true; some called it unpredictable and irresponsible.

The impression stuck. When I recently had the chance to attend the premiere of Richard III at the Schaubühne in Berlin this spring, I practically danced to the stage. Arriving, I felt like I was at a rock concert. There were at least a hundred people waiting for returned tickets. The air was electric. Holding a pass in my hot little hand, I thought someone might try to steal it from me. The production was once again entirely mad, and extraordinary. I have never seen this fervor for a performance. Not for Kevin Spacey, not for Hugh Jackman, not for Mark Rylance.

If Lars Eidinger’s Hamlet is so groundbreaking, why hasn’t it, or Mr. Eidinger, come to the US? Other productions of the Schaubühne have been brought to the Brooklyn Academy of Music (BAM) in New York City, but neither of the above. Keen to investigate, my inner sleepiness dissolves the moment Eidinger’s sweet charm fills my screen. As we chat about the differences in the world—wondering at his idea of anti-nationalism for Germany, our views on life and death, his appreciation for vampire films and The Beastie Boys—it quickly becomes apparent why his characters ring such different notes with audiences. This man is an artist like none other I have come across.

Lars (I can call him that now) says very seriously, “The way I’m working is completely different because I try to invent the characters out of myself, so the character is already in me. Because I think everybody is very complex; everything that is edgy is already inside of us. It’s nothing I have to find inside somebody else. I don’t believe in this “method” idea that you can become somebody else. This is also not my aim. I always want to appear as Lars Eidinger on stage.” Ah, okay then. No method comparison for him. I start to wonder if he really is slightly crazy.

I come right out and ask him why he/Hamlet hasn’t been here. Eidinger explains that some producers “said they are very afraid of American critics, that maybe they won’t like our interpretation of Hamlet.” As it has toured all over the world, and most recently went to China last month, it makes me wonder if critics so control what audiences here see. Why are they/we afraid of the different? 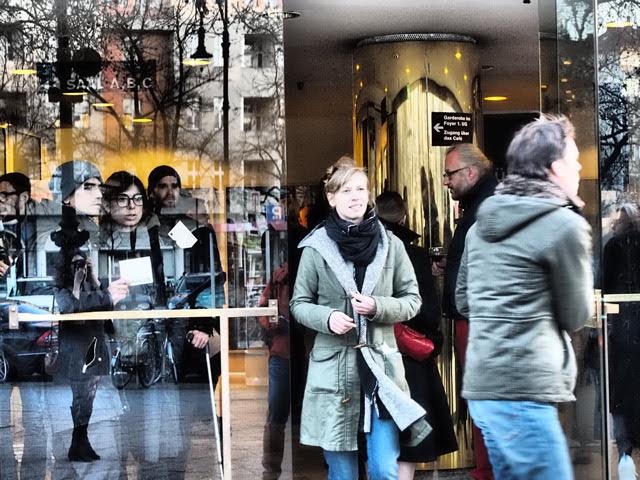 These people sure aren’t. Ah, Europeans. Photo by Ashlee Renz-Hotz.

Lars describes why a cut flower is beautiful: It’s already dead. “This is what theater is about. You know, it’s just there for the moment. This is also why I am trying to improvise—be more electric. I want to make the people aware of this situation. If I’m taking this glass now and destroying it on my head, you will see it, and you will see the blood, and nobody else.” I feel a moment of panic, as I think he might actually break the glass on his head. This is, after all, the ever unpredictable, genius Lars Eidinger. I hope I don’t faint.

He hesitates before putting the glass down. “Tomorrow it’s over. Tomorrow I’ll just have a scar here, but that’s it. For me, this has great beauty, and it has a lot to do with living. To celebrate this kind of mortality is what art is about.” Many theatrical practitioners can’t subscribe to this philosophy of live performance. For him, he can see no other way to communicate, and everyone around him seems to want his Kool-Aid.

He tells me, “Some celebrities say, at one point they were afraid that somebody would realize that they are not as talented as they think they are. That they have been found out.” I tell him I think everyone lives this to a certain extent. “Yes. But with me it’s the other way around. I think I’m a genius, and I’m always afraid that nobody sees it.”
I am so taken by surprise by his honesty that I dissolve into laughter. He responds with an innocent smile.

I recently caught up with a couple of colleagues who were with me at that fateful Hamlet performance and chat with them about it. “You mean the performance that changed my life?” one practically shouts. Both look at each other, then look back at me and say, “LARS!” in a simultaneous sigh. “Do you think America is ready for him?” I genuinely ask. The other says definitively, “No. Absolutely not. America is SO not ready for Lars Eidinger.”

Which is precisely why we need him. We were never ones to shrink away from a challenge.