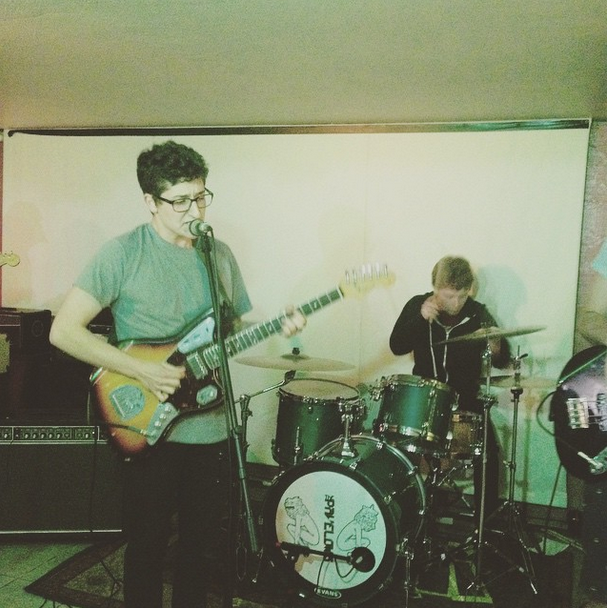 My friends Deer Park playing a show in Hillsboro, Oregon. You can bet they have some marketable music biz skills. Photo by Robert Lanterman (Instagram).

After the breakup of seminal emo band, The Get Up Kids, front man Matt Pryor said he found himself at a confusing spot within the work environment. Since he had been on tour for so many years, it seemed to be all he knew. He soon realized that being in a small but successful rock band taught him something very important that looks great on resumes—he had been spending all those years on the road essentially learning how to run a small business (he mentions this in several episodes of his podcast, Nothing to Write Home About).

The bottom line is to be respectful and kind to everyone you come in contact with.

My experience compares on a much smaller scale to that of The Get Up Kids, but I think I can relate in some ways. Thinking about the years I’ve spent talking with promoters, booking/promoting shows in and out of state for my band and others, putting out small releases for my band and my friends’ bands on my own label, I realize that my little bit of experience can make for a pretty decent resume in the business world. In fact, many of the things on my resume—the same one I used to get my current job at a small marketing firm—are things I learned doing DIY music business.

Here’s a few of those marketable business skills, and some I’ve learned since:

Obviously, the making and spending of money is the point of business in general. While I’ve never considered financial profit to be the center of the art I create or how I share it with people, money is for better or worse what makes the world spin. That said, knowing how to pay people or even talk about pay requires wisdom, and to a strange extent, courage. Are you getting a guarantee or a door split? Do you have it on record and in writing (or electronic record…Facebook messages, emails, etc.)? Promoters (people in money in general) can be notorious for not paying bands what they promised. It’s happened to me, it’s happened to my friends. It gets even more complicated when two different tours have their shows combined.

On the other side of things, if you’re the promoter, you have to ask things like which band had the show reserved first? Other things can factor into this whole realm of confusion as well. If a tour has multiple acts on it, are the bands sharing a vehicle? There was a specific case in California last summer where a tour I was on got added onto another tour. We weren’t completely aware of the details, but the band who had the date reserved first was kind enough to split pay 50/50 with us. Also, just being able to talk about pay up front and in a professional way is a pretty marketable skill. Of course I’ll always be learning, but it’s a good starting point as far as financial communication goes.

I most recently learned this designing T-shirts and album covers and for my band and others, but design and marketing (my major) go hand in hand. It’s important to have a little knowledge of design, as you need to have some sort of idea of what will sell or how to sell your music, visually speaking. Another reason you should learn Photoshop is that it’s an industry standard, so it’s good to be able to put into terms what specifically you want from a graphic designer if you end up working with one.

It’s fairly simple to learn and there are loads of online tutorials and classes out there. It will cost you some money every month, but you can get a free 30-day trial. I personally recommend AGI Training Photoshop Classes or going to YouTube and check out the Photoshop Tutorials channel. Regardless of how you learn, though, the point is that being able to use a program like Photoshop—or at least knowing about it—gives you credibility in an area many of your coworkers or workplace peers aren’t familiar with, as well as opens you up for a variety of different design jobs, even in the business world.

From booking tours, I’ve realized there’s rarely such a thing as preparing “too soon in advance.” I started using Excel a lot more when I was booking multiple dates at a time, and to be honest, it’s a simple program everyone has and a good amount of people do not know how to use properly. Those who can use it have a good “skill” to put on your entry-level business-world resume. Through booking tours I’ve also learned that you absolutely cannot lose track of where you keep things. This is obviously important in any job, but when I moved to a marketing job I already had ideas on how I like to organize things on my computer and how to use programs such as Excel to keep track of my information—I already had some huge basic skills down that people less familiar with computer programs still had to learn. Not only was this marketable before I got my job, but it helped once I was hired as well.

As much as I absolutely hate the statement and sentiment of, “it’s not what you know, it’s who you know,” it’s a much more accurate description of reality in the workforce than you or I would ever want to believe. Networking with promoters, venues, other bands, etc., has given me a variety of skills for doing the same thing in the business world. The bottom line is to be respectful and kind to everyone you come in contact with, while maintaining your personality and values. This has led me to create a lot of great partnerships, both in music and out of it. If a band comes to me and says they need shirts done for a tour, I can easily tell them to go to Underground Screen Printing run by my friend Konrad in Salt Lake City. In the same way, if someone tells me they need custom signs made for their business, I can send them to a company like MegaPrint in New Hampshire, who I’ve done writing for in the past through my day job. Networking means making connections, using your connections to make new connections, and recommending other people to your connections. It’s a cycle, and they’ll most likely return the favor for you.

There’s definitely a “dress for the occasion” attitude, so to speak, that should be taken in all business situations. I don’t necessarily mean the way you dress (although in almost every job that’s a very important factor from the first interview on) but there’s a way you treat people depending on the transaction or nature of your relationship. This has been exemplified time after time to me in the music world.

As tour manager on my first tour, it was my job to be upfront with the managers at each club, to handle money transactions, and to be a middle man between the band and the venues. Learning how to carry yourself with confidence in these situations is very important, but what’s maybe more important is knowing how to cater to people’s social personalities. What I mean is this: Everyone communicates differently, and when you need something from someone, you need to be able to understand what they’re saying and where they’re coming from should there be a confrontation, without backing down or compromising your mission with them. Balancing sternness and empathy is ultimately what it really means to be professional.

Maybe I missed something, maybe you just flat out disagree with me. Why not write in the comments below, or let me know on twitter @robolitious?