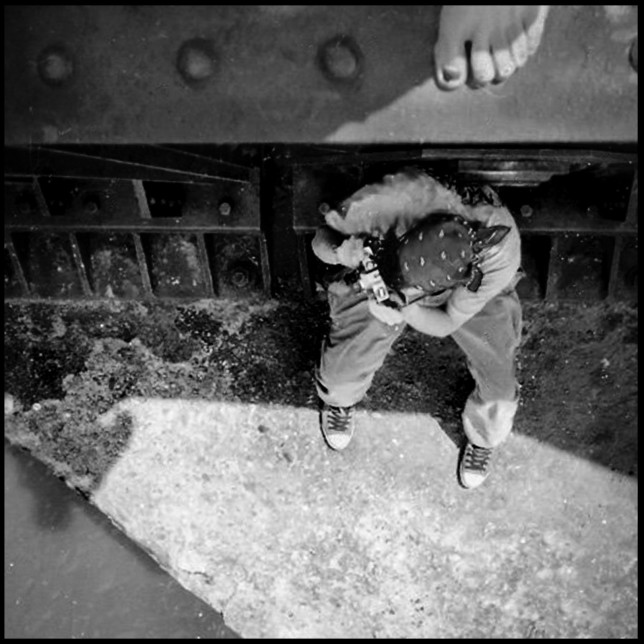 I look ignorant only because it’s the ’80s and I’m in high school. Photo by Michael Harris.

It was 1989, my thoughts were blunt, my hair was shaved, stuck in a small town high school in the Finger Lakes of New York. This was the year I had reached an understanding with the school. I was an angry teenage photographer who had little interest in doing anything outside the darkroom that didn’t involve causing some kind of trouble that I could then photograph. Slackers, ditchers, underachievers—they knew how to deal with these kids, but the monomaniacal student, not so much. I guess they figured it might be best for all involved if I was left alone to spend as much of the school day in the darkroom as possible.

It was towards the end of the year that I stepped out of the rotating darkroom door to find students unpacking stacks of paper fresh from the printer. A half-page fold-and-staple magazine was being laid out on the work table for collating. To my surprise, there was some crappy test print of mine on the cover. Not a good print. Not an image from a series I was working on. Just an old nothing of a shot I had used to test some fogged paper. The editor had apparently walked by the print drying rack months ago, snagged my photo and put the image on the cover without asking. This was the Eighties and “WTF” had not yet come into common usage, but the need was certainly there.

People that steal photographers’ work often feel like they are doing the photographer a favor.

I found the editor, the school’s communications teacher, unpacking boxes and, waving the publication in front of him I asked the obvious: What is this? With a big smile he explained it was the school’s literary magazine, they were being sold for a dollar as a fundraiser for some stupid school club, that my work had been selected for the cover and wasn’t that great? I explained that while I never gave him any photos, would never have given him this particular photo and didn’t support the club it was funding, I would let it slide this time. He was a nice guy, the school year was almost over and I was trying to make it through with a decent enough of portfolio to get into art school next year. I had work to do and I just didn’t need the hassle with the school. I grabbed one and turned to head back to the darkroom.

“Those are a dollar,” he said.

I would learn through experience that people that steal photographers’ work often feel like they are doing the photographer a favor. He actually thought he was being supportive of my work. He thought I should be honored. I wasn’t.

“Not for me they’re not,” I said. He looked shocked and said, “Clarke, those are for a fundraiser. If you want one, they are a dollar.” Now I was pissed.

Did he remember earlier in the year when I had snuck into the faculty copy room and gotten caught running off copies of my zine with the photos I shot of local punk bands? They threw all those in the trash and gave me a week’s detention if I remember correctly. It was time to remind him.

I said, “I would never run someone’s photo in my zine without asking them and I always give contributors a free copy. You stole my picture, put it on the cover of your magazine, are selling it to fund something I am against and you won’t even give me a free copy? That’s just rude. You can give me one for free or you can throw all these in the trash and reprint it without my photo on the cover.”

I watched the smile leave his face.

Even at 16 I knew this was crap. The editor knew it, too. Maybe he had never thought about it before, but he certainly didn’t appreciate some ungrateful kid pointing it out in a crowded classroom. But I wasn’t grateful. Why would I be? I wasn’t asked and if I had been I would have said no. This was not part of my education. This was not a collaborative effort. This was just an editor stealing my work because they thought they could get away with it. Beyond that, when I asked for the most minimal of compensation I was getting an attitude. This was the first time a magazine stole my photo, but it sure wouldn’t be the last. Over a 25-year career as a photographer, this same scenario would play out repeatedly.

We just stood there for a minute. Other students had stopped working and were staring now. I pointed to the trash can. Slowly, he reached over to the pile of magazines, handed me one and I walked back to the darkroom.