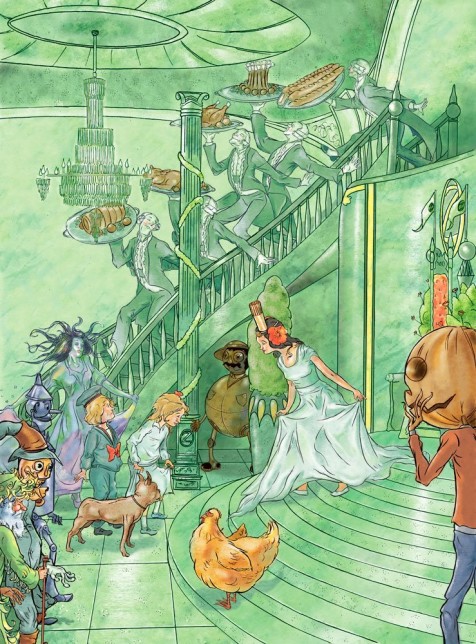 About seven years ago I did an illustration for an Oz convention. Oz conventions are to Oz fans what Star Trek conventions are to Trekkies. These conventions aren’t about the MGM musical, but the books (though some people are into the movie, too), the many Oz books written by L. Frank Baum of which The Wizard of Oz is only one. Then of course there’s the musical Wicked, and that recent movie with James Franco, and I think at least a couple of cartoons.

I was contacted by the great grandson of L. Frank Baum who wanted to give them as gifts to his granddaughters.

An acquaintance of mine, David Maxine, was organizing one of the biggest Oz conventions, Winkies (yes it’s called Winkies—just go with it). He asked me to do a little black and white spot for the convention program. He’d seen some Alice in Wonderland illustrations I’d done and thought I’d be a good fit. So I decided to give it a shot. The theme was one of the original Baum books, The Road to Oz.

The Oz books are bizarre and beautiful and richly imaginative and have little in common with the MGM musical which doesn’t begin to capture the feel of them. As a teen I’d read several, but not all, of the Oz books, including The Road to Oz. I loved them, so I really wanted to do this justice.

Now you should know that I haven’t always drawn the traditional and accessible stuff I draw now. My work was more inspired by German Expressionism and alternative comics than anything remotely kid friendly. I drew weird. Some may even say grotesque.

I had done an anthology comic for the small press publisher Alternative Comics, some web comics, and a few covers for free weeklies. It was esoteric stuff. I had tried to do more mainstreamish work in the past—I’d made a serious stab at greeting cards in my twenties—but I just didn’t understand how they worked. I was legitimately clueless about what appealed to mainstream tastes. But it had been a decade since, and I had gotten better and wiser. And I got Oz.

So with John R. Neil as a model (Neil is the illustrator of most of the original Oz books), I decided to do all the technical stuff I’d been avoiding. Perspective, crowds of people, a more traditional approach to figures. I did it in color, even though I knew it would print in black and white. To make it less intimidating, I drew everything separately and assembled it on the computer (an approach I still use today). I took my time, and it took forever. It was the hardest thing I’d done up to that point. When I finished, it was like nothing I’d ever done before. Unlike the work I’d done previously, it was the kind of thing I would have really liked to look at as a kid.

David was also impressed. He decided to print it in color on the back of the program. I posted it on Facebook and got a lot of compliments. Some of my friends were a little stunned. More than one said, “I just didn’t think you could do stuff like that.” It was a reaction I’d never gotten before. Up to then, I had been determined to do what I considered “serious” work. But this “serious” work had become joyless. I wasn’t having a good time. But for the first time in a long while, I was truly enjoying myself.

I made it into a poster and sold a few on eBay. Then something else surprising happened: I was contacted by the great grandson of L. Frank Baum who wanted to give them as gifts to his granddaughters. He ordered half a dozen of them. I wasn’t sure if it was really him, so I contacted David Maxine and told him his eBay handle, and David assured me that he was indeed the real deal.

After this success, I decided to do more illustrations based on childhood favorites. James and the Giant Peach. Doctor Dolittle. Another acquaintance took notice: Chris Duffy, an editor at Nickelodeon Magazine. He asked me to do a small spot illustration of the cast of SpongeBob Squarepants as The Wizard of Oz characters. (Recently I did a two-page strip for Spongebob Comics that Duffy also edits—keep those contacts! It’s SpongeBob Comics #46, and at this writing I’m pretty sure you can still order it on Amazon or request it from your local comics dealer.)

So I decided to get serious about doing kid’s book illustration. And after a year, I’d built up a sizable portfolio. It won Best in Show at a Society of Children’s Book Writers and Illustrators conference. A year later I got my first gig for Cricket Magazine, and the year after that my agent agreed to represent me.

It hasn’t been easy. It’s a highly competitive field. I’ve gotten lots of rejections, and still haven’t had a book published by a mainstream publisher. But I’m slowly building my career and for the first time in a long time I get real joy from the work I do. I will always be grateful to David Maxine for reminding me of what made me want to do illustration in the first place, and to Chris Duffy who gave me that first opportunity. And I’ve never been happier.