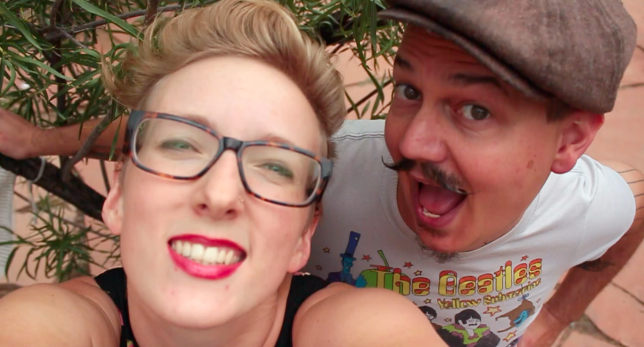 This is a still from the oohs section of the video. See how much fun we’re having? Image by Sage Harrington, who’s clearly holding the camera.

Jared (the other half of my band, Sage and Jared’s Happy Gland Band) and I really like watching OK Go’s music videos. And somehow, without really realizing we wanted to do an OK Go-type video—maybe because they’re so intimidatingly well-produced—we’re in the midst of making an incredibly lo-fi, GoPro-esque, analog special effects type of music video.

After the video follows the story of how my boyfriend (who is also that bandmate I was mentioning earlier) and I made our latest music video in an afternoon—without even arguing about one single aspect of the process—in helpful step-by-step format.

Planning is generally a good thing to do when making videos. There are an infinite number of ways to go about this. Maybe draw some stick figures, even if you’re crappy at drawing. I’ve done this—it’s really, really helpful. Or write down a few ideas, with words, in a notebook. Are you doing a narrative-style video? Write down the story. Write down the different types of shots you want, so that when you’re shooting them you can tick them off your checklist. You can see how detailed Pomplamoose gets in their video-making planning process. It’s so cool, as an eternal proselytizer of Pomplamoose’s DIY business model, to see how much Jack Conte wrote down in planning a video.

On that time we didn’t make a plan: a cautionary tale

Once upon a time we spent an afternoon driving around in the dusty, windy Albuquerque wind, kind of aimlessly shooting a bunch of really crappy, mostly overexposed footage, and felt sad and defeated (not to mention grit-encrusted) when we got back home and realized that we couldn’t bring ourselves to use any of it, because we hated it so much. This has happened on more than one occasion. We scrapped the whole nebulous idea we had for that song’s video, made an actual plan, filmed the whole thing at home, and the results were so much more satisfying for us. 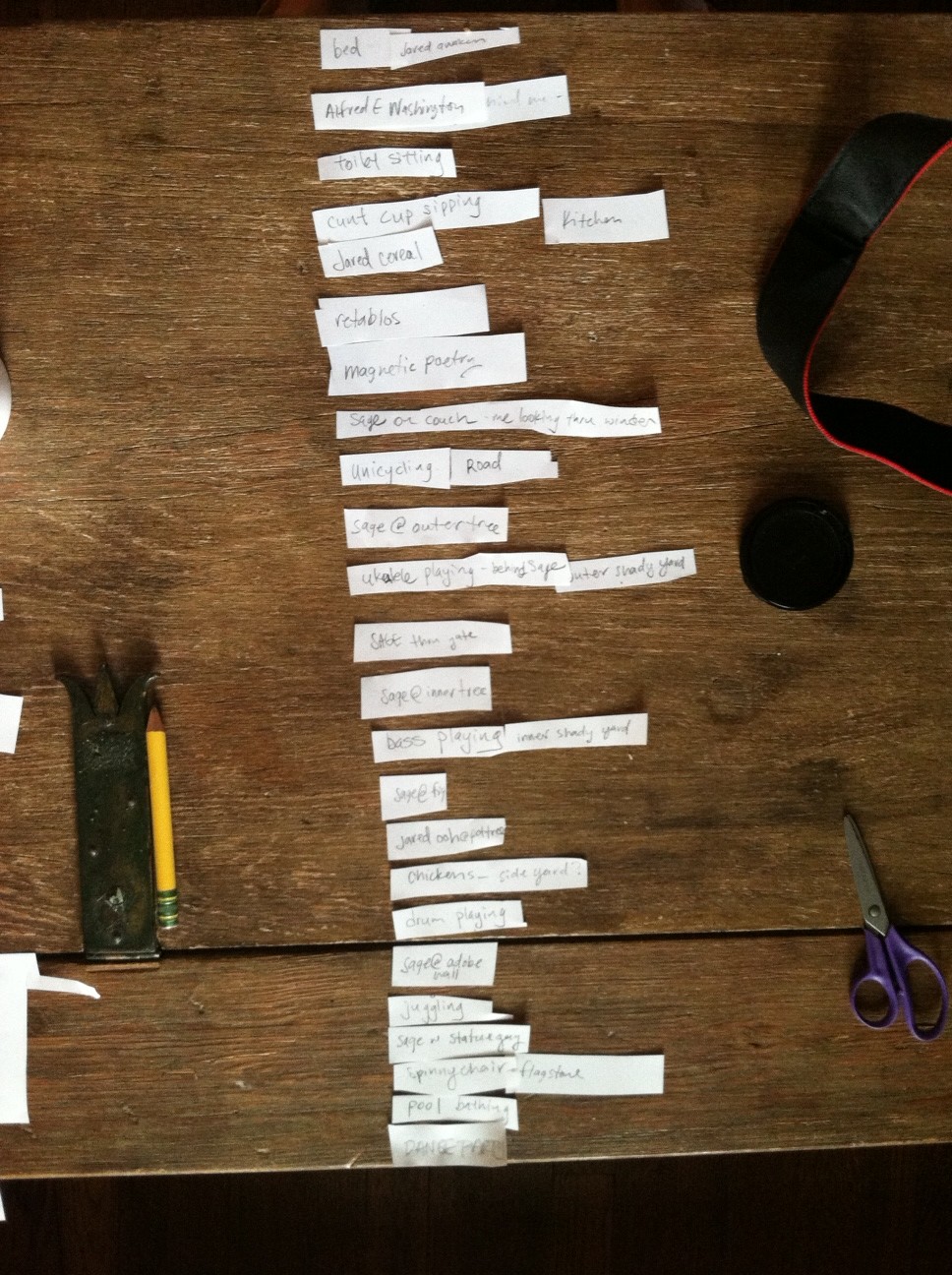 First draft of choreography for You Won’t See Me. Cutting out these little moments made it really easy to change our ideas around and find the best flow. Photo by Sage Harrington.

Step 2: Making your video at home, or in a sort-of controlled environment, is so much easier

So, as someone who was socialized to be all ladylike and meek and stuff, I feel awkward, say, pulling up to a junkyard and asking some dudes at work if we could, like, hang out and make a music video. (“No, we promise not to climb on anything!”) So there’s the thing about my aversion to abnormal social interactions. Also, Albuquerque is the desert and sometimes the desert is windy and I just haaaaate seeing dust blown right into my laptop keyboard as we lip-sync to our own song in a junkyard, powerless as ever to slow the inevitable march of decay. This type of sunny, windy video shooting situation leads to hunger, the need for a toilet, dying camera batteries, mild sunstroke, and couples’ arguing. It’s a tough world out there, folks.

But filming a video at home? God, all your gear (except maybe the camera) can stay inside on a beautiful cloudy day and you don’t even have to worry about it maybe getting rained on. And you can charge all the dead batteries you have, with minimal stress! Did you just shoot enough footage to fill up your camera’s memory card? Good job! You can empty it and back it up on your desk, out of the glaring sun. Did you forget that you’d be needing a tripod/a fake pearl bracelet/a coffee/more lipgloss? Well, no shit! All that stuff is just right over there. And you didn’t even have to pack any of it.

Step 3: Get better, next time

There are a few really specific things about this video that I don’t like and don’t want to talk about because I don’t want to bring attention to what I feel are its glaringly obvious flaws. But I’m really excited to work with this sort of lo-fi OK Go music video concept again, keeping our (secret) “mistakes to avoid” checklist in mind.

Our super wonderful and fabulous patrons over at our Patreon page have promised to pay us $175.99 for making this video. I know, I can’t believe it either.

Or buy our cover of The Beatles’ “You Won’t See Me” on Bandcamp.