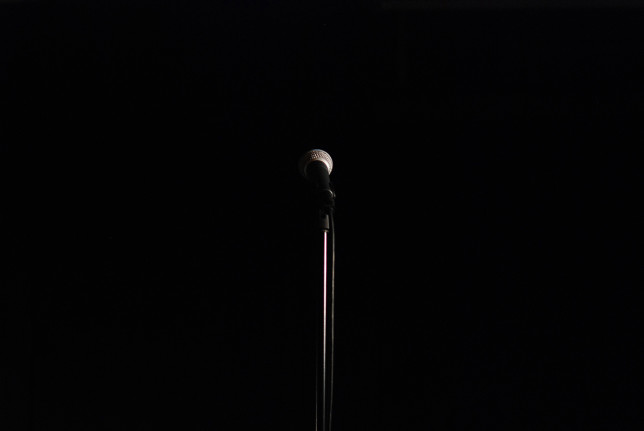 A month or so back I had my first experience with an audience actively disrupting and overtly disrespecting me at an open mic.

The venue was a brewpub just off the interstate. The open mic has been held on Tuesdays there for some time now. It normally goes quite well; sometimes the audience members don’t expect a comedy show, but we have some non-comedian regulars who make a point to attend. At least a dozen or so people perform at each show, getting somewhere between four and seven minutes. Most of the shows go down in a sequestered room, where we can’t be heard from the bar area. The glass doors leading to the patio were open that night.

I first noticed a group of guys—I called them “agéd bros”—when I expressed my excitement that they were there. A group a rowdy dudes can make the difference between performing to a silent dearth of laughter and having a good set. I thought they’d make up a fun part of the audience. I noticed that their polo shirts said “(something) Football” and that they looked like past-their-prime former athletes—large, somewhat muscular, and beer-bellied. I didn’t pay much attention to how they ate or drank, but later I realized that they did become quite drunk.

My fear gave way to a strong, positive, emotional charge.

Shortly after opening the show, the host, named John, approached the group and touched the shoulder of one of these men, asking what he did; the guy reacted by becoming completely silent, and from our perspective offstage, obviously angry. The host couldn’t quite see his face, but another comic commented to me that the host might have backed off sooner if he caught the look on the guy’s face. He didn’t answer the question about what he did for a living, so the host asked, “Do you receive free massages?” and started to rub the big guy’s shoulder. The silent apoplexy made the ambiance ice over, delaying the loosening-up process that’s integral to the beginning of any comedy show. The host gave up on the crowd work and went into material, performing a full set. I don’t think he got any big laughs from the group in question, although after some general groans, John said he had the right to make jokes at the expense of Latinos because of his skin tone, haircut and last name.

The second comic is a nerdy white dude like me, and his material went over pretty well with the front half of the audience, which was composed of comics, people the comics brought, and audience members who intentionally came to watch comedy. His jokes were about how difficult it is to be around and with people, and he repeated a refrain emphasizing that theme.

I went up third. I said I liked the previous comics’ stuff, and that I’d build on that. One of my jokes goes like this: “Empathizing while anxious is like trying to fart silently with headphones on. You might get it right, but you won’t know ’til it’s too late.” I wallowed in this space for a while as the socially inept comic. When I realized this wasn’t engaging the crowd, I tried a question.

“I’m curious, does anybody use Siri or otherwise talk to their phone regularly?”

The already disruptive group took my mild insult very poorly. A comic named Kevin told me later that he tried to help with crowd control by staring at the loudest heckler continuously, while laughing at my jokes and eating chips and salsa. Multitasking at its finest. This disruptive guy made eye contact with Kevin, got uncomfortable, and shook his head. The comic nodded his head insistently and kept staring. The message was: “If you want attention, you’re going to get more than you bargained for.”

The old bros became louder and more irate. After I stage-shouted another short joke or two, one guy yelled, “My thirteen-year-old could fit in those pants!” in reference to my black, admittedly very skinny jeans.

The only comeback that came to me was: “Can I have her phone number?” but I choked it in, for fear of being physically hurt. If I were less green, maybe I could’ve come up with a less provocative second option.

I continued on with my material, feeling less and less secure with each joke. Smitty, one of the comics and coincidentally a tall black guy told me, “Hey, finish your set,” with a tone implying, “I’ve got your back.” I did so, almost certainly with a red face. 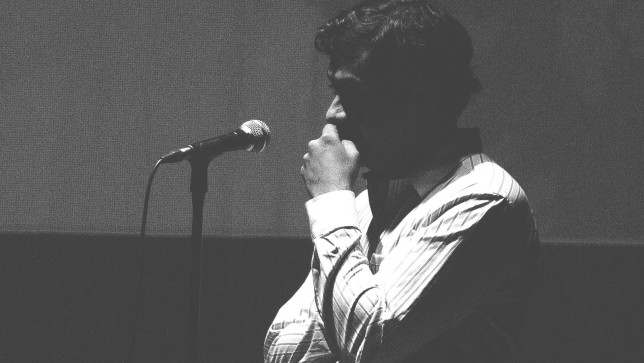 I went a little past the second light (indicating that my time was entirely up), momentarily confusing the legitimate instruction to get off the stage by the organizers with the feeling of being forced off the stage by disruptive jerks. After I handed the microphone to the host and shook his hand, I walked back to my seat on the patio where I had a glass of water waiting. I chugged it greedily, as the stress of being heckled left me with a dry mouth.

“Yeah! You drink that water!” shouted one of the agéd bros. I guess he regarded the desire for hydration as weakness. I was none too insulted.

Another comedian, Tony, moved to sit next to me, facing in the same direction: toward the table of fat, aggressive assholes. I appreciated the proximity and implied support in the case of overt aggression. At this point, I felt justifiably scared for maybe 45 seconds. One of the middle-aged dudes shouted at me, “If you’re gonna roll, you best ball up.” Or maybe it was, “If you’re gonna ball, you best roll up.” I don’t have a clue what either of those mean, so same difference, right?

They continued to talk loudly as they got up from their table, while Smitty took the mic and started into his material.

“Yeah, now they got Black Jack and the Beanstalk on,” said one of the bros from the edge of the patio, well out of Smitty’s hearing range.

A couple of dudes stayed behind to talk shit among themselves, but they all straggled out eventually. A few more insults were thrown, but never by someone within five yards of the insulted party.

Four cars sped out of the parking lot; the loudest revving came from a Dodge Charger. My fear gave way to a strong, positive, emotional charge: This had been a rite of passage, and I had performed adequately, if not admirably. The other comedians had openly supported me as one of their own. I felt an amazing, a natural high of adrenaline and gratitude.

The common enemy brought the real audience and the comics closer together.

Smitty stuck to his material. He explained later that he didn’t want to give the jackasses any more time than they had already taken. But the other comics had no such idea of just desserts: AJ, who followed Smitty, talked about the bros’, ahem, ample figures: “Those guys weighed 300 pounds, but they made sure to still put on shorts. It’s like they’re saying ‘I’ve still got a little definition left in my calf, look!’ The Dodge Charger: its emblem should be an aging, shrinking dick.”

I replied with a quick “Fuck you!” but it was all in good fun.

The comic who followed AJ commented that the hecklers had noticeably strengthened our camaraderie; the common enemy brought the real audience and the comics closer together.

My mind turned to getting home: I’d need to ride my bike to catch the last southbound bus of the night. I thought about what a bitch the hecklers would’ve thought I was if they knew that’s how I got to the venue. Then I realized that I was quite vulnerable leaving. It’s not like I could speed away (as I could have in a car) if any of them were waiting for me outside the venue, and I didn’t have another passenger to call for help or defend me if I was confronted.

As I walked to my bike, I heard Kevin calling the guys “alpha-beta males,” which I thought was accurate. Realizing that nobody thought there was a real threat alleviated some of my worry, and I got home just fine.

I’m not sure exactly how to put into words what I learned by being heckled for the first time. It was great that what could’ve been a negative experience turned into making me feel so fucking nice. My fellow comics kept telling me afterwards that I needed to keep confident in the face of adversity, to trust that I would be viewed as being in the right simply by virtue of having the mic in hand, and other things that I probably should’ve known before this experience. But now I have a feel for these ideas in my gut.

Marty Adamsmith is a third semester PhD student in linguistics at the University of New Mexico. He is thinking of changing his research focus to humor studies after spending the last academic year looking into child language in Southern Peruvian Quechua. He’s taught English as a second language at UNM and the University of Texas at El Paso. Marty has been performing at stand-up comedy open mics for six months in Albuquerque, Tucson, Austin and Round Rock, Texas. People tell Marty that his jokes are smart, although that may change as he incorporates more stories from his love life.

View all posts by Marty Adamsmith →