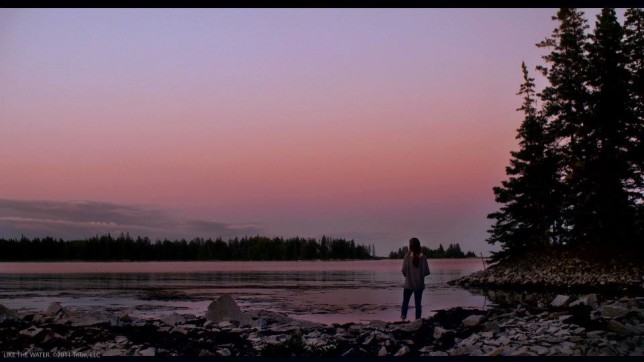 Caitlin FitzGerald is an actress and filmmaker. She cowrote and starred in Like the Water, and is currently starring in Showtime’s “Masters of Sex.” This post was originally published on Seed&Spark’s blog, and reposted here with kind permission.

Like the Water was born out of many bottles of wine, naive enthusiasm, and a group of lady friends large enough that if one person faltered and screamed, “What-are-we-doing-we-don’t-know-how-to-make-a-movie!” there was always at least one of us having an empowered day who could say, “Nah, we got this.” And maybe because we didn’t know any better, and maybe because we really believed in what we were doing, and really believed in each other, seven months from the moment I first drunkenly suggested that we make a movie in Maine, we found ourselves doing just that.

There are lots of things that lots of people have said lots of times about the benefits of making your own work. These include: how empowering it is, how satisfying it is to raise a couple of big middle fingers to Hollywood and its storytelling priorities (guns, guys, and girl), how important it is to dig down deep and make things that remind you why you decided to become a motherfucking artist in the first place, how maybe you’ll get lucky and make the $70,000 movie that gets bought at Sundance for $7 million, etc.

But what I want to cast a little light on is how one of the coolest parts of making your own work is that you get to determine the nature of the making itself.

If there’s anything that’s really not great for fostering open and interesting creative work, it’s unvoiced panic and terror.

We were a group of first-time female filmmakers and almost without fully appreciating what we were doing, we created an atmosphere on set and around the work that was unlike any other film set I’ve ever been on (all except another indie directed by another badass chick, coincidentally). To begin with, we had two weeks of rehearsals before we even started shooting. Two weeks! Never—not ever—is that a thing. This rehearsal included warm-ups and exercises with our resident actress/voice coach Susan Main (it is also never—not ever—a thing to have one of those), so that by the time we got to set we had worked with the material in an exciting and expansive way.

We also created a daily ritual in which we would stand as a group, holding hands in a circle, and take turns saying what we were grateful for, where we were at emotionally, and what we were scared of. This was not always easy, and often confronting, but it also felt a little revolutionary and completely contrary to the prevailing atmosphere on set—often a heady mixture of unvoiced panic and terror. And if there’s anything that’s really not great for fostering open and interesting creative work, it’s unvoiced panic and terror.

Along with the voice work, rehearsals and rituals, we also made a lot of space for fun together. There was skinny-dipping and karaoke-ing and the eating of lots of food and the drinking of lots of drinks. We wept together and laughed together and screamed together. For me, who was in every scene and almost every shot of the film, being on such an intimate journey with everyone before and during the shoot made for a set where I felt I had complete permission to do what I needed to do as an actor, complete permission to explore and create and get weird.

To create a working dynamic that was of our own making, by our own rules, is one of the greatest lessons I learned on Like the Water. So often on sets it feels like everything is about pushing for a final product, and not at all about the process of creation.

One of my favorite sayings is from the Bhagavad Gita and goes, “We only have the right to our labor, not the fruits of our labor.” I mean, we all want to make great films, but don’t we also want to love how we make them? And maybe, just maybe, the how gets reflected in the final product. And it certainly makes us better artists.

Like the Water is an imperfect movie, as all first movies are, but I can say unequivocally that the process of making it was life-affirming and life-changing for all of us. And I wish that greatly for all of you intrepid enough to make your own movies. I ask you: What is the set you want to work on? What is the space you want to make for your artistry? How will you create the circumstances of your labor?