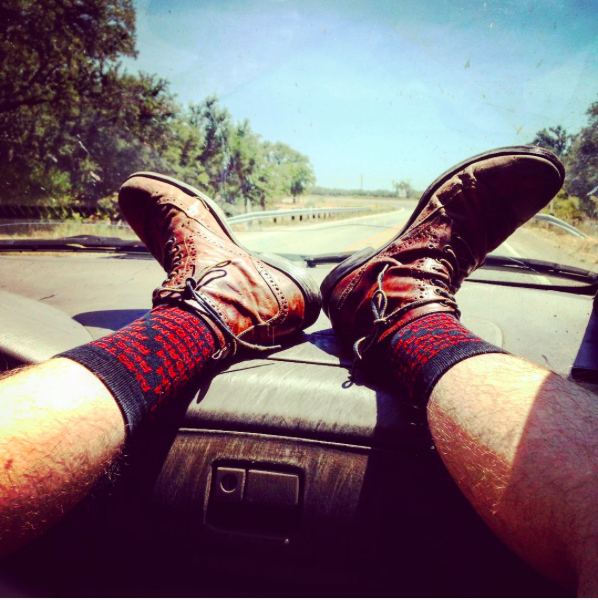 This is the second post of a four-part series. Check out part one: Tour Journal, Part 1: I’m Worn Out, But I’m Touring Again, Anyway.

Drive day. Jeremy and I head to the West Coast from Austin, Texas for the first time in four years, and as we wind through the hill country, I recall that this was the first scenery I saw when I embarked on my first tour, 10 years ago. We played El Paso that night, but this time we’ll be traveling well past El Paso; our first show is tomorrow night in Las Vegas at The Bunkhouse Saloon.

It’s easy to talk about how we’re over having fun on tour, but traveling with your friends is fun, and so is playing music.

We stayed at a motel on the outskirts of Tucson last night; now we’re on the way to Las Vegas for the first show of the tour. I haven’t been to or played in Las Vegas since my first tour. It’s also where my first band broke up. A promoter I knew in Austin moved to Vegas a couple years ago and told me to contact him for a show, and I did—he set us up with two great shows. Well-paying shows too; these shows will be the financial anchor of the tour.

I think about how sick of touring I’ve been feeling lately, and I think about the impact touring at such a small level has. And I’m still optimistic about it even after ten years of not hitting it big. Social media, having your songs on TV shows and commercials, and PR are all great, but there is something viscerally and immediately gratifying about driving to a city and playing in front of people. And it’s not about whether or not it’s effective; it’s about whether you have the time, inclination, energy, spirit and enthusiasm to do it and make it financially solvent. At the end of the day, that’s the question.

The show at The Bunkhouse was great—killer system, people were into it. The promoter kept buying us drinks, and an old friend of ours who had recently moved to Vegas was there as well, so we hung out into the wee hours.

We have old friends here, and we had a great time and there are certainly some hip spots, but something about this town bums me out, and it isn’t just the cliche of desperation, loneliness, the end-of-the-line-ness of it all. Las Vegas is a city that puts on its best duds, smiles and tells you everything’s great and only getting better, but if you look closely you see the charade, the cracks in the facade. So many con artists, so much that is shallow, face value, skin deep. Like the carnival took over the town. This is somewhat romantic and attractive, I guess, in a kind of Bukowski or Sam Shepard way, but for the most part Las Vegas just feels like a hangover to me.

We’re headed to LA to play the first of two shows—we’re playing The Viper Room tonight, and The Mint tomorrow. We haven’t played LA since 2011, but the shows have been promoted well and we have some friends in town that should come out. We’re meeting up with Jeremy’s wife today, and she’s gonna drive and tour manage for us as we make our way up the coast.

We’ve yet to make a dent in the West Coast market, and I don’t know if this tour will change anything; I’m keeping myself psyched by telling myself that all of the venues we’re playing on the West Coast are legit, the bands we’re playing with are legit, the shows are put together and promoted well, etc. Essentially, we’ve done the best we could given what we have to work with. In addition, even if every show bombs, it’s allowing us to travel through what to my eyes is the most beautiful scenery in the States, so just enjoy that if nothing else. And we have friends in every town we are playing that we rarely see, so that’s nice too. I’m beginning to need a fair amount of rationalizations to keep doing this as the years and miles of small potatoes touring stack up. I miss my family.

The show last night at The Viper Room went very well, better than I was expecting actually. All of our friends came out, and some fans as well—a guy and a girl were in town from Hong Kong and checked out a ton of bands playing in LA online, and liked us the best and came out, and bought all of our merch. We definitely made some fans as well.

The Viper Room feels like a showcase spot, like you’re playing SXSW or something, and my hat goes off to the two most efficient sound engineers I’ve ever worked with. We’ve never had a decent show in LA, and this show was more than decent. It’s weird. Maybe we are making some kind of headway that’s difficult for me to objectively quantify because I’m inside the process and not observing it. 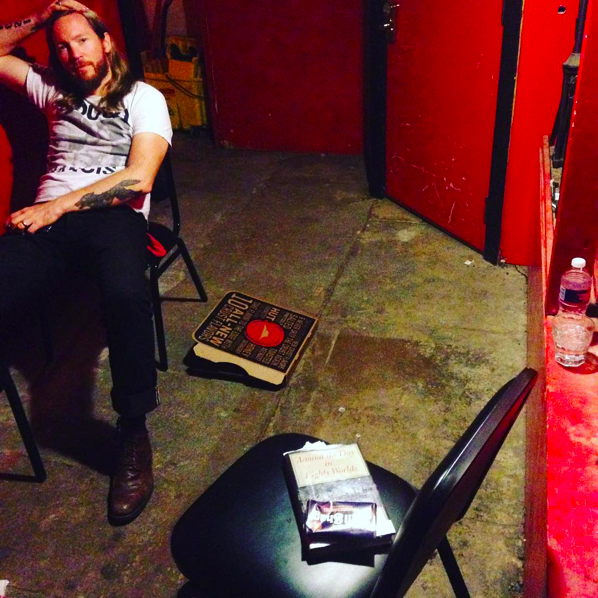 The show at The Mint was pretty good too—not as well attended, but some people who are involved with publishing and licensing to film and TV came out to watch us—something that is always supposed to happen when we come to LA, but actually did this time. We talked a lot after the show; they were really psyched about us and want to push us to a lot of people and help with booking the town as well, which is a huge boon to the band. Very cool people too, none of that LA schmoozy stereotype shit. I had no expectations of something like this happening when I embarked on the tour, and I’m amazed to actually have our music reach people like this. I’m also jaded and experienced enough not to get too excited or read too much into it, but it is a legit contact, and it’s validating, flattering and inspiring.

Side note: The Mint has a green room, a cause for celebration for anybody who’s been touring under the conditions we have for 10 years. Privacy and silence before the show can be very nice sometimes.

We had an incredible show in San Francisco last night. It was one of those times when following indie touring blog advice actually worked out and paid off: Have a popular band let you open for them, and then tell the friends you have in that town to come and bring as many friends as they can. All that happened, and it was packed; we sold a bunch of records and made a lot of new fans. It’s been so long since we’ve played SF that this might as well have been our first show here—a small but notable triumph for our little indie band.

San Francisco is a truly great city, one of the few American cities that has the ethnic diversity, density and cultural sophistication of cities in Europe like Paris and London. I got to wander around on foot in North Beach this morning by myself for a while, which is my favorite thing to do in a city—looking in shop windows, people watching, ducking into cafes for a beer or coffee, playing up the part of the flaneur. Outside of NYC and SF it’s not a very satisfying thing to do in the US, but SF is built for it. It may even be better-built for it than NYC because it doesn’t have that frenetic capitalist pulse that makes NYC seem so edgy and caffeinated; it has that easy, piss-the- afternoon-away-in-a-cafe feel of Continental Europe. I feel spiritually refreshed and rejuvenated after spending time in cities like this.

So far, so great. Jeremy and I are enjoying ourselves and playing some of the best shows we’ve ever played. It’s easy to talk about how we’re over having fun on tour, but traveling with your friends is fun, and so is playing music, so we’ve just been concentrating on enjoying our lives on the road, and not worrying or stressing too much about our career. That the tour is successful thus far is just icing on the cake.