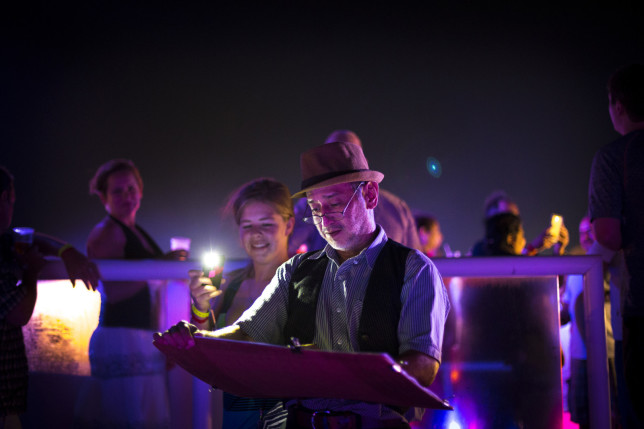 We’ve all heard the term. The term used to describe the subset that most people feel we belong to (or better yet, need us to belong to, so they know how to relate to us, or explain us)—that term that when used makes us instantly recognizable to others who fit into our cute little oddly-shaped box. You know the term…”a creative.” As in, “Oh! You’re a creative!”

People, society, THE WORLD have turned a word that was once just a sweet, innocent adjective into an all-encompassing NOUN. But like any good noun, it still knows its adjective roots. You can’t use the term “a creative” without immediately having descriptors jump into your frame of thought. Descriptors like “vibrant,” “moody,” “weird,” “sullen,” “outlandish,” and yes, some people, who are admittedly not creatives, will even use the word itself to describe us. As in, “You know…those creatives…they’re just so…for lack of a better term…creative.”

Everything we do is intentional.

Obviously they are not part of our elite little fraternity because we would never use the actual word to describe the same word. We’d say something like, “You know…we creatives…we’re just so…for lack of a better term…fucking ALIVE!” Or at least I would. But really—let’s explore that. What does it mean to be “a creative”?

1. We can find inspiration anywhere.

Literally anywhere. In a piece of french toast, watching a television show, in a balloon aimlessly floating through the sky, even in the toilet paper roll. Everything and anything can coax from us some of the most amazing works we’ve ever created. To you it’s just a straw. To us, it is a metaphor for America’s obsession with consumerism and waste, and our desperate need to swallow anything corporate America will throw at us so we’ll feel “whole.”

2. We are sensitive about our shit.

Like, sensitive. Like, we will fuck your shit up and make you wish you’d never even thought the words you dared to mutter about our work. And then we’ll cry about it/obsess over it/question ourselves, our mamas, and our babies’ mamas over it. And we’ll create some new shit all about the old shit you had the nerve to criticize. Remember—we can find inspiration ANYWHERE. Even in a shit storm of drama.

3. We know exactly what we need to get work done.

Please don’t try and tell us that we need to learn how to work with Baroque music playing in the background because scientific studies have shown that the brain responds well to that type of music. (Yes, people have actually said that to me.) Especially if we didn’t ask for your input on what we need.

We got this. We’ve been doing it a long time.

I mean, sure, we may lie to the bill collector and tell them that the check is in the mail. We may lie to our friends and tell them we’re deathly ill with the stomach flu/our period/Ebola. We may even lie to our partners and feign the world’s worst headache, pretending our eyes are about to pop out of our head because of the pressure (but it’s all in the name of art, so ultimately, it’s for the greater good).

However, we’ll never lie in our art. We will tell the truthiest truths in all the land. If we make you uncomfortable, it’s on purpose. If we make your eyes well up with tears of joy and disbelief with the first bite of our dinner creation, it’s intentional. Everything we do is intentional. As the saying goes: We have ONE job. And that ONE job is to make you feel. If we made you feel something, anything, then: Mission accomplished.

We just work differently than other folks.

I once had a client who didn’t understand why often times I would get my work to her at the zero hour. It drove her bananas. She would scream and yell and berate me for waiting to the last minute, but then in the next breath praise me for being a “creative genius.” While in my head I wanted to punch her in the throat (because seriously, not even my mama talks to me like that), I had to smile because my shit was good. She knew it and I knew it. It just wasn’t how she wanted to get it. And ya know what? That’s just the way it goes sometimes.

We’re not going to force the funk just to get you something with five hours to spare, only so we can agonize over how shitty it is for the remaining five hours. Remember—we’re truth tellers, and sometimes that truth comes at the zero hour. And that’s that. We may not ever have an outline to present to you of just how we’re going to organize a project. For some of us, that may just make our heads explode. Put it down on paper??? WHAAAAAAATTTTT??? But we can promise you that the shit will get done, and it will be divine, and you will love it. You will also probably hate us for making you shit your pants with anxiety.

We’re okay with that though. We can make art out of that shit too.