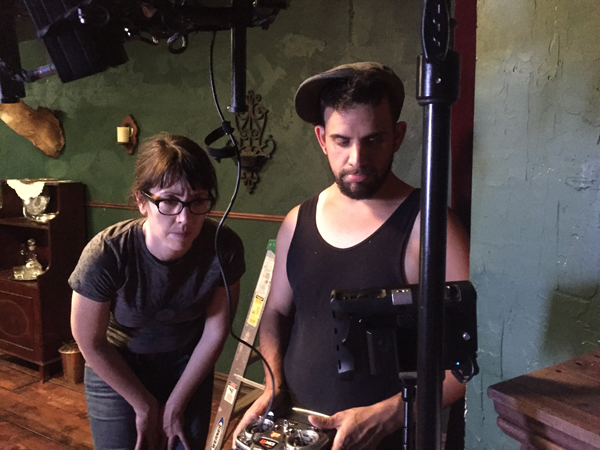 Jane Rose is a Brooklyn-based filmmaker and special FX makeup artist. She is a segment director and FX artist on The Moose Head Over the Mantel, a feature film that is currently being crowdfunded on Seed&Spark.

So, you want to be a film director. Sure, who doesn’t? Lots of people are attracted to the idea of making their own movies and being the main creative force on a production. But in my experience, there are two types of directors: those who have experience in one (or several) technical aspects of filmmaking, and those who don’t. I find that knowing your way around some aspect of moviemaking—whether it’s production like lighting or post-production like editing—adds a lot to one’s abilities as a director.

I’ve seen both types of directors in action while plying my own area of expertise, special FX makeup, on other people’s productions. After an early start making guerrilla movies with a collective in Brooklyn, I recently had a chance to return to directing on Inappropriate Films’ feature The Moose Head Over the Mantel (for which I also was part of the FX team). My years doing makeup FX for the Inappropriate team were a huge help to me in the role of director in a number of ways.

1. Knowledge of the filmmaking process.

They are sending the AD to ask you every five minutes when the satyr character from Pan’s Labyrinth will be ready.

In Robert Rodriguez’s book Rebel Without a Crew, he urges filmmakers to become technically competent in order to maintain control over their own projects. I have found that time spent as a skilled member of the production team has contributed immensely to my understanding of filmmaking overall. Not only has this led to a thorough understanding of how makeup FX works (key knowledge for a horror filmmaker), but I have also gleaned more about the disciplines that go hand-in-hand with my own, like how lighting and editing tricks can sell an effect or scene. All that time in close quarters with actors in the makeup room has given me a better appreciation of their craft as well. And time spent on set has helped me to form my own opinions about what I like in a director as a crew member and to strive to do the same when I’m directing.

2. A more realistic view of what is possible.

The director has planned a shot with a face-on view of a decapitated head, and it needs to look realistic. But surprise! The budget is 25 bucks. Or the director has asked for a complicated character makeup but hasn’t taken into account the time that requires. And now they are sending the AD to ask you every five minutes when the satyr character from Pan’s Labyrinth will be ready.

Many makeup artists have been there, in one form or another. But the positive result of experiences like this is that they give you perspective when it comes time to step into the director or producer role yourself. You know that the werewolf makeup will take at least five hours. Moreover, you know to ask your crew members what is possible given the limitations of your production, in terms of time, money and effort.

Filmmaking is nothing if not a series of problems to be solved, and that is true across the board, for every job. Learning to solve problems in the comparatively (I said comparatively) low-stress role of a crew member will serve you well as a director when everything is riding on you. If you can rig a blood effect on the fly when you haven’t had the benefit of rehearsals or storyboards, then you’ve been training in the kind of problem-solving abilities needed when directorial issues come up on set.

4. More appreciation for the efforts of your cast and crew.

Speaking of those crew members, spending time as one gives you a better appreciation of the amount of effort required for each individual’s job. Spending several hours creating a custom prosthetic provides valuable perspective on what everyone else is giving to the production, and the ability to recognize this is a great “soft skill” to have. As a makeup FX artist on low-budget movies, I’ve always found that genuine thanks from the director goes a long way toward making up for a lack of money. 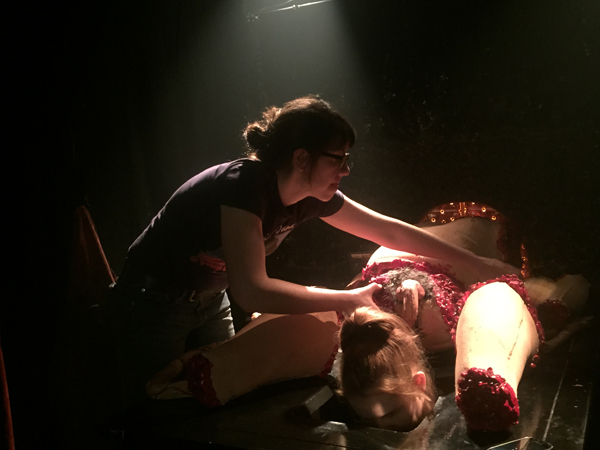 On a very practical note, working on other people’s projects as a member of the crew is great way to broaden your list of filmmaking contacts, so that when it comes time to find cast and crew for one of your own projects, you have a deep pool of people to draw from. In low-budget filmmaking, it can also be a great cost-saving measure to have a skill to barter with other filmmakers (i.e., “I will create your zombies if you will then come and assistant direct for me”). And you never know what opportunities might arise later as a result of doing skilled work now. I was a makeup FX artist on several Inappropriate Films projects before The Moose Head Over the Mantel, so when it came time for Jessi Gotta and Bryan Enk to choose someone to direct the gory 1880s segment, they knew who to call!

Finally, all that time spent in and around sets, watching other people fuck up and have successes, observing what works and what doesn’t, will better equip you to frame your own vision.