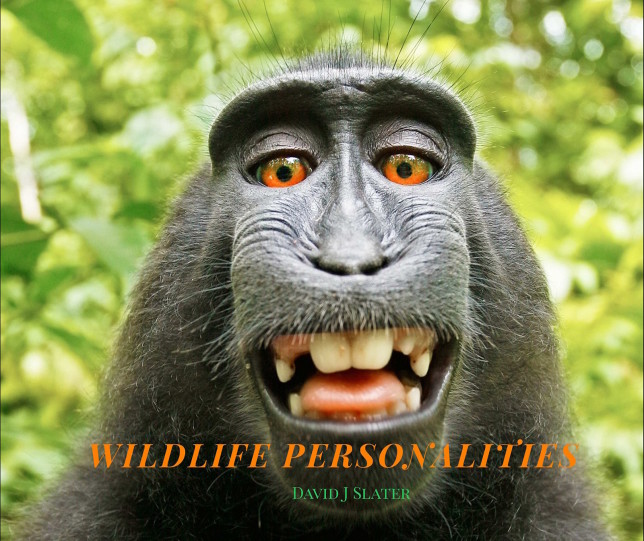 Cover image of David J. Slater’s book, Wildlife Personalities, featuring the photo at the center of the Monkey Selfie dispute.

Andrew Dhuey (do yourself a favor and click through to Andrew’s LinkedIn profile) is a lawyer based in Berkeley, California focusing on patent litigation. Andrew and I went to college together at UW–Madison and we’re friends on Facebook, and I enjoy reading about some of the interesting intellectual property cases that he sometimes posts about. But all those cases pale in comparison to his latest: the Monkey Selfie case.

When I saw that Andrew was representing British photographer David J. Slater in a copyright infringement lawsuit brought by a monkey represented by PETA’s lawyers, I knew I had to hit him up with some burning questions.

Peri Pakroo: Hi Andrew, thanks so much for chatting with me. Is this your first monkey selfie case?

Andrew Dhuey: Yes, but I’m learning quickly. I think when this is done, I’ll be among the top 50 monkey lawyers in the nation.

That’s exciting. Can you tell me about how you first heard about this case? How did it end up on your desk?

When I read about the case, I first slapped my forehead (as everyone did). But then I saw that it was filed in San Francisco federal court (across the bay from me). Opportunity knocked. I contacted David Slater and made my pitch. There you have it.

For folks who haven’t read much about the case, can you give a quick background? David Slater had published a book, and a photo was included in the book that allegedly was taken by the monkey, named Naruto…do I have that about right?

Yes, Wildlife Personalities is the title. The famous Monkey Selfie is on the cover. To be honest, I have never gotten into exactly how the photo came to be. It makes no difference in this lawsuit—at least at this stage. My client has the story on his website.

So Naruto the monkey, through PETA who is representing him, is claiming ownership of the photograph and suing David Slater for infringement.

The cruel irony is that David finds himself the target of PETA’s suit. As you might expect from a nature photographer, he adores animals. He and I don’t understand PETA’s thinking with this.

It sure does seem odd. I read the Boston Herald article about this case and enjoyed this line: “Dhuey said that Naruto, as a monkey, doesn’t have standing to sue, and if PETA wants to establish primate rights in court, ‘a copyright case is the strangest place to start.'” Do you know of other monkey plaintiffs? Or defendants?

No, but there have been a few cases where animals were supposedly party to the lawsuit. A very important one is Cetacean Community v. Bush, a 2004 Ninth Circuit case. A lawyer in Hawaii purported to represent cetaceans in a suit claiming the US Navy’s use of sonar was in violation of the Endangered Species Act, the Marine Mammal Protection Act, and other laws. The Ninth Circuit flatly rejected that the non-human animals had standing to be plaintiffs in the case. The court said that if we’re going to take that major step of animals having standing to sue, Congress is going to have to declare its intention to do this.

I’ll add that I think standing for animals in court is a serious idea when it comes to laws enacted for the protection of animals. Not copyright, however.

Might the outcome of this case affect photographers who attach GoPros and the like to cats, eagles, etc.?

I’ll be amazed if the outcome of this case isn’t a dismissal for lack of standing. That should happen in January. We’ll never get to the merits, nor should we. As for the examples you give, if all one does is strap a camera on an animal and turn the camera on, then there probably isn’t sufficient creative input for authorship under copyright law.

I think lil’ Chips the cat may beg to differ.

I should never have messed with Chips. Now I’m scared.

Any advice for wildlife photographers working with aspiring artist animals?

Hire me when PETA sues them.

Good advice. Does Naruto have any shows coming up?

Not sure. State Bar rules prevent me from contacting a represented party, so Naruto and I have fallen out of touch.

I’ll check the calendars. Thanks for filling us in on the case, Andrew.