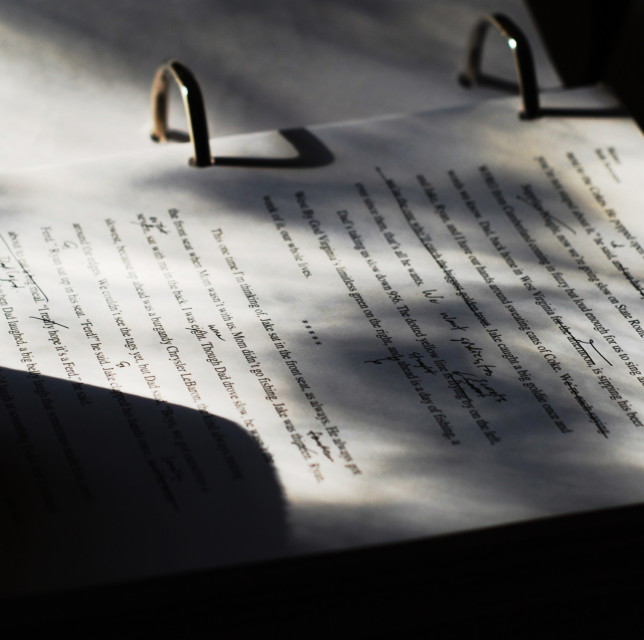 It’s bittersweet. I can still hear traces of characters’ voices chasing loose tides and billowing strands of hair through desert landscapes. I see guns firing, their bullets riddling another broken body, ricocheting off bits of concrete. But this dance is finished. I wrote a piece a while back about my secret to finishing your “damn novel.” I wrote that pacing yourself is key. That seeing an end reached, a promise kept, is enough to keep going. And I’ve done it. I’ve actually finished the first draft of my manuscript. At 78,000 words and 240 pages, the fucker is finally printed and sitting on my desk, awaiting my edits.

It was a hard road, people. I’m not going to lie. The idea was birthed more than 10 years ago, yet I didn’t start the actual act of writing it until about two years ago. And there’ve been nights where I cried, nights where I listened to the Rolling Stones for inspiration, nights when I drank whiskey to try to cope with what I was doing, with who I was doing it for.

I feel as if I both birthed something and saw it go into the grave.

I was reintroduced to social media a couple days ago after a self-imposed hiatus. I had deleted my Facebook account, abandoned my Tumblr page, forgot about knowing what Twitter even was; all because I was at the tail end of the writing process. I could see the end was near, the last page approaching, and I couldn’t have any distractions. I knew the last line of the novel before I even knew the situation that would prompt it. I knew what resolutions lay ahead before I even knew if there were going to be any resolutions. I listened to “Custom Concern” so many times because it was the song that shined a light on the perfect ending to this project.

You see…I’m both a visual and audible writer. If I can’t picture a scene in my mind (like a film reel), I scrap it. If I can’t imagine it, it’s not real. If it’s not real, it can’t happen. If it can’t happen, it needs to go away. I also listen to music, both while conceptualizing and writing. I listened to Creedence Clearwater Revival one night when I sat in the living room of my apartment, trying to figure out how to kill off a character while making it epic, while at the same time making it almost beautiful. I listened to Chicharra’s live performance on KUNM while mapping out a particularly elaborate dream sequence. I got lost in the sounds of Valerie June’s “Somebody to Love” when I had lost hope, and then a bright speck in a black sky caught hold of my eye line, and I saw the next chapter right in front of me, before I even had the space or time to write it and make it real.

This is all to say that writing a novel is a journey. It’s a relationship. I finished it only a couple days ago, and I feel as if I both birthed something and saw it go into the grave. Even if it never gets published (though, don’t get me wrong, that’s the goal), I can say that I wrote a book. That I did something because I wanted to. That I had a story to tell, and I told it. That I told her story. That she is alive because I made it happen. And even if no one else hears her story, I did. And because of that, she’ll always live on. And she’ll always be beautiful.