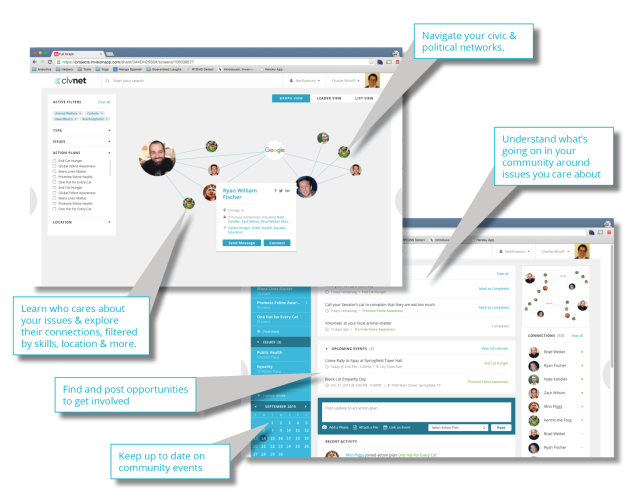 Guest Blogger Charlie Wisoff is the Founder and CEO of CivNet, a new online platform for community building. He can be reached at charlie@civnet.co.

Can the internet help save our democracy? I’d like to think so.

I moved to Albuquerque in the summer of 2014. My partner grew up in Window Rock, Arizona, on the Navajo Reservation, and we moved here to be closer to her family. At the time we moved, I was working under contract for my former employer, the Kettering Foundation. Kettering studies how to give people and communities more control in shaping their future. Through my work I saw some needs that I felt weren’t being met. In particular, I’ve noticed the lack of an online space that does a good job of engaging people in civic and political issues.

The online civic space has failed to empower users to engage on their own terms.

During the early years of the internet, many lauded its potential to bring about an unprecedented exchange of ideas and organizing tools to improve our democracy. Anecdotally, with a few exceptions like the use of Twitter during the Arab Spring, the internet has failed to live up to its promise. Citizens are overwhelmed by the volume of online advertising and political rhetoric and tend to silo themselves away from people with differing views.

The fundamental problem, I believe, is that the online civic space has failed to empower users to engage on their own terms.

Many people lament our broken political system or an uninformed US public. I believe that the power to fix our democracy lies in you, the person reading this article, and the actions you take, from having a conversation over dinner with your family, to calling up your local representative. All that’s missing is a platform that builds community capacity and helps you understand how to make an impact on issues that you care about.

Thus the idea for CivNet was born. I started working on the idea in January 2015, and we now have seed funding and a development team. We are in beta development and we will be releasing the beta in Albuquerque and the surrounding area December 2, 2015.

The beta platform will help users understand what’s going on in their communities, connect with others who care about similar issues, find opportunities to get involved, and organize to take action. CivNet already has over 250 beta users signed up and we aim to sign up 500 community members before the beta release. If you are interested in signing up or learning more, you’ll find more info at www.civnet.co.

Along the way of developing an app, I’ve learned a few lessons. First, never get involved in a land war in Asia. Second, set up a routine and pace myself. As a solo-founder of a startup, I often feel like I have to do everything and anything under the sun. I’ve been working on CivNet since January, but I didn’t bring on a development team until September, so my responsibilities used to include development work, too. I don’t have a boss, so the more I’ve been able to be clear and realistic with myself about expectations and set a routine for myself, the more efficient I’ve been and the more sanity I’ve kept.

Last, as an advisor once said to me, finding partners to work with is like entering into a marriage. Asking people to work for equity means that they need to trust me just as much, if not more, than I need to trust them. Taking time to cultivate relationships and participate in community and professional groups was super helpful in finding a lead developer.

It has been an exciting year developing CivNet—and we’re just around the corner from the best part: actually engaging communities. Empowering communities is the driving force of this project, and we can’t wait to see how people use the site once it’s up and running in December.

CivNet invites you to come celebrate CivNet’s beta release on December 3, from 6-9pm at the Epicenter, 199 Central Ave. SE in Albuquerque.