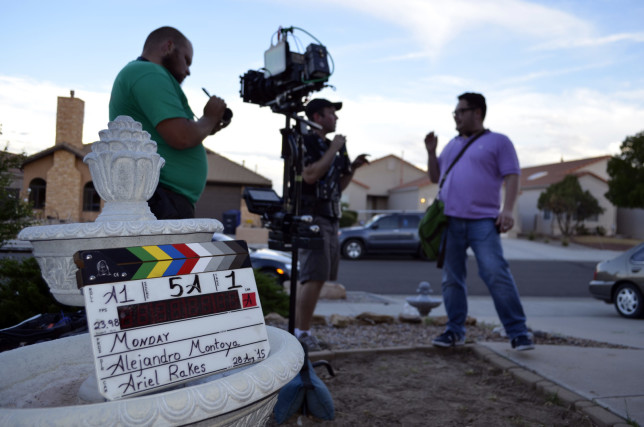 Welcome to the latest installment of What’s Your Deal? in which Alejandro Montoya, on behalf of his film production company 4.5 Films, explains his deal to Pyragraph.

1. What kind of films do you make?

I like to make films people can relate to. Something that can try to move them and or have them escape.

2. Tell me about your background as a filmmaker.

I have always been interested in film. Going to the movies was my favorite thing as a kid. Taking my dad’s camera and doing spoofs or videos was what I loved to do with my friends. Then I took it seriously and went to study film production. Now I am here, doing what I went to school for, and trying to get our films out there.

3. What was the worst film/video project you ever worked on? Dish all the juicy bits.

Oh wow, there have been several. There are a lot of people who consider themselves “filmmakers” but don’t take it seriously. I have worked with jerk DPs ( who should remain nameless…right, chilango?) and people who have no consideration for their cast and crew. I find that to be unbearable. I have been on big sets and small sets, and there are always all kinds of experiences. But there are always good ones as well. I am lucky to have found the amazing cast and crew I work with. 82/92 Productions, Serious Grippage and Light, RiffRaff New Media, without you guys… our projects would be nothing.

4. Who are your favorite filmmakers at the moment?

So many. PT Anderson, Spielberg, Kubrick, Gonzales, Inárritu, Cuarón, del Toro, my boy Marty! I am super pumped for Sicario; I think director Villeneuve is someone who has a lot of talent. Also Jeremy Saulnier.

5. What’s the most helpful tip you could share with aspiring filmmakers?

Do it. Only if you love it. There are other, less time-consuming hobbies out there. Film should only be done if you are ready for it to consume you, and if you do, give it your best. Because it’s beautiful.