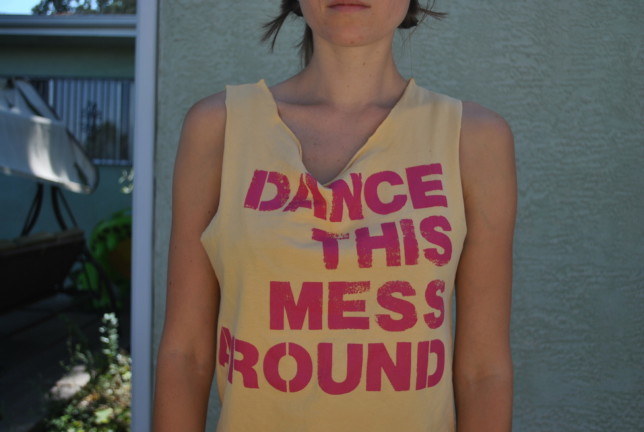 This is the second in a rare, exclusive two-part series in which Tabatha finally opens up to Tabatha about the beautiful and terrible things she’s encountered in her fifteen years of acting. Read part one here.

I’ve been wondering: What, for you, is the hardest part about being an actor?

Dealing with the interludes between takes. Those moments where someone might talk to me in the context of our actual selves. Agh. I just. It just.

What? I mean, a film or a TV show is a collaborative process. Do you just silently drool at everyone around you? How do you get by, not wanting to talk to the people you work with?

I’m saying that talking to another human, on set, as our actual selves is a terrible possibility. I think I feel this way largely because, social anxiety problems aside, if I have to get along with someone in a scene but I learn I don’t have anything in common with them in real life, that knowledge has an impact on my work. I have to reroute my socioneuralcapaciter, and gosh that’s not the easiest thing to do mid-filming. I consider myself a method actor in terms of preparation, so putting up boundaries with some people is a part of my process. That means that some of the people on set probably do see me as a silent drooler.

You kiss a lot of people. Are you the silent drooler with them?

It’s actually very important to me I talk with people I am making out with. It doesn’t matter whether it’s real life or pretend; consent is priority and we need to make sure we’re mutually in the same weird fauxmantic place.

If there’s some wisdom or anything, really, you’d like to say to yourself as an actor, what would it be?

Your big ego moment, Tabatha. Your experience. Whatever.

Okay. Say it to yourself.

Okay. Here goes: You are the medium, you dumb fucking tool. There’s a difference between self-awareness and self-obsession, and your B.A. in Theater translates roughly into a diagnosis of narcissistic personality disorder. You eat yourself up every day, you scrutinize and adore your face, read your lines, listen to your voice inflect differently the next time around, watch your face do that thing, select the clothes that fit you just the right way for that role for that casting director for that series for that network.

Good fucking grief, aren’t you fed up by now? Is this sustainable? How long can you feed off your ego before you just vomit all over your sides and stumble numbly into that audition room and admit that you’ve had enough of your own buffet, that it’s time to step aside for some other glutton with carefully positioned hairs and clean clothes to come into that audition for CASHIER and say, “Your total is $5.15,” in just the right, left-of-center, interesting way?

You mention buffets. I’m so hungry. I need tea and brownies.

I’m such an asshole and I feel like there’s gotta be a place for those, and it might not be film. I’m simultaneously an asshole and also a tiny speck. When the universe spits you out, a creator, a person who writes or inks or strums, you have those moments when you say to yourself, “Who the fuck do you think you are?” feeling totally unqualified yet insatiably driven to make, make, make, to spill your guts out, to release your energy back into the world that made you exist.

The great actor doesn’t bring to life something new, she shares a part of herself through the lines of someone else. The grotesque, the playful, the dignified. She validates her own existence by stepping into a piece of fiction. That’s so fucking cool. I just get the feeling I might be headed towards creating my own fiction. Anyway. Thanks for having me. Enjoy those brownies.

I have a whole plateful.