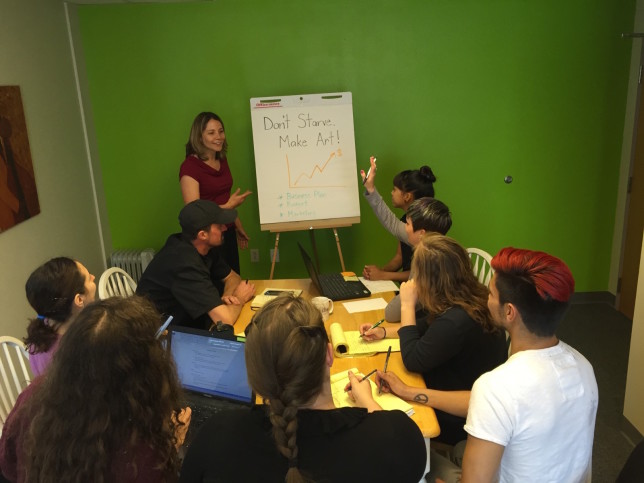 “Art is a lonely business.” I hear this phrase rolling off the lips of my mind’s interpretation of the modern artist. There’s an unspoken rule that suggests an artist shouldn’t expect much help, if any, along the road to success or fame or even sustainability.

Enter the Keshet Ideas and Innovation Center (KIIC) whose mantra is, “Don’t starve. Make Art!” KIIC is a relatively new nonprofit based in Albuquerque whose mission is to expand and enhance strong business foundations for the many dynamic artists and arts organizations in the State of New Mexico.

“Artists have been so used to ‘going it alone’ that they think they have to. It’s quite the contrary.”

As Albuquerque (and I) catch our collective breath after an extraordinarily robust 2015 full of cultural events, I wanted to learn more about KIIC and what they’re doing to combat that old notion that going it alone is a necessary reality for artists. I reached out to Emily Dunkin, KIIC’s Programs and Operations Coordinator, to talk about the modern artist’s hesitation to seek help, the climate of creative ventures in Albuquerque, and KIIC’s position providing resources for artists of all stripes in the local arts scene.

Josh Stuyvesant: The New Mexico Department of Cultural Affairs published a commissioned report last year that quantified the economic impact of arts and cultural industries, and it features the statistic that nearly 10 percent of jobs in New Mexico are linked to the creative and cultural sectors. That is a big amount, yet there doesn’t seem to be a strong focus on developing more economic growth in that sector. From your end of things, what can you say are some of the challenges facing Albuquerque’s creative economy?

Emily Dunkin: I definitely don’t think there is a lack of artists or resources in Albuquerque, I think it’s the disconnect between artists knowing there are resources and connecting them to those resources. Artists in Albuquerque have been so used to “going it alone” that they think they have to. It’s quite the contrary. Through KIIC, we are not only offering business resources such as workshops to artists, but we’re connecting those artists with each other. Most of the artists I’ve talked to are excited to feel like they have a community where they are among friends going through the same experiences.

Alright, so let’s say I’m an artist who has decided to dive into self-employment, become a dutiful taxpayer, and leverage a wider audience. The thing is, I don’t know how to go about any of this. What specifica resources can KIIC offer me?

Keshet offers KIIC memberships to individual artists and arts businesses. With this membership we offer benefits such as arts business workshops on everything from budgeting and cash flow, to employment law and grant writing, to building a board of directors. These workshops are available to the public for reasonable rates, but for KIIC members, they are free. Additionally, KIIC members receive discounts at Keshet Center for the Arts and opportunities through our partner organizations, The Loan Fund and Fractured Atlas. For the benefits we offer, our membership rates are extremely reasonable!

KIIC is in partnership with The Loan Fund. Can you speak the uniqueness of this opportunity? The benefits?

The Loan Fund received funding from Surdna and Kresge Foundations to offer financial support to artists that would otherwise be unavailable.

Is there any other institution offering this kind of support?

There are other organizations helping creatives grow their businesses but they focus on selling products. We are here for the artist wherever they may be in their career, whether they are just starting out or they are 10 years into making art. 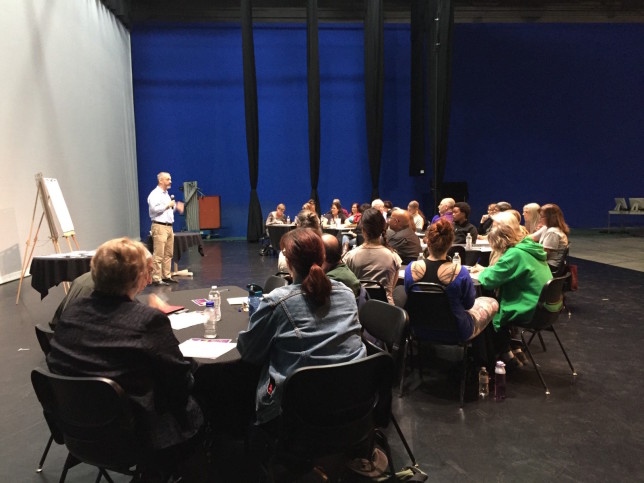 Generally speaking, what do you think is the biggest mountain artists must overcome in order to be sustainable?

What are some success stories from the KIIC support system?

Our membership has doubled in the last two months! There is so much excitement among KIIC artists who are feeling support in their journey towards having their art be a viable and sustainable business. I think that is a huge success!

​What does the future hold for you guys?

For KIIC specifically, we hope to grow our number of members, and offer more workshops, mentorship and resources to create more working, financially viable artists. Keshet is entering its 20th season as an arts-based nonprofit; as part of our mentorship philosophy we will continue to mentor other artists and arts businesses. It would be amazing to see Keshet Center for the Arts grow as not only a performing arts community space but be recognized as a space that embraces and champions all art disciplines.

This post was developed in partnership with Keshet Ideas and Innovation Center, a Pyragraph sponsor.