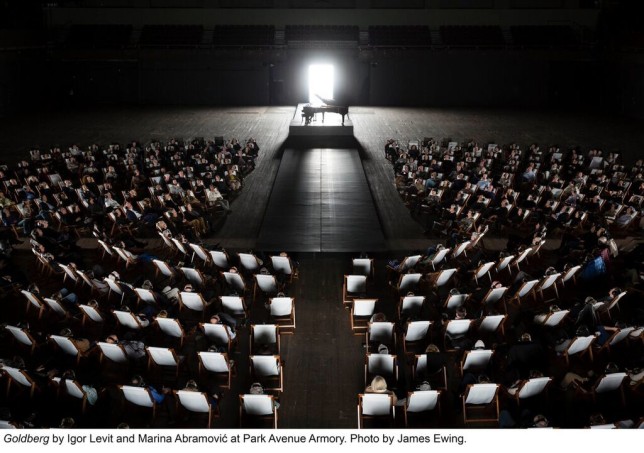 Or, should I say Igor Levit’s Goldberg? Entering the Park Avenue Armory, New York’s most epic performance space, the crowds were glowing with an air of palpable excitement, and slight haughtiness. They clearly knew art, especially the kind of groundbreaking, innovative performance art babushka Marina Abramovic presents to the enlightened, adventurous hoard who have been following her for the over three decades.

One wonders before the show if she has now turned into a hands-off guru? Has she become content to simply direct and marionette others through her fantasies, rather than perform herself? Ms. Abramovic simply lends her “method for listening to music”, i.e., being in a soundless, head-phoned, beach chair-sitting environment and witnessing the conceptualization of a classical music performance.

I don’t know why, but two tears fall as grace to the simple beauty.

At least this is what cynical me has running through my head as I come into the grand hall. Yes, I am a performance art curmudgeon in the midst of the enthusiasts—an excited curmudgeon, but one nonetheless. My partner and I sit amongst the low hum of chatter as the hall fills, people tripping over the aforementioned white lounge chairs in their tizzy to find a good spot. The lighting genius of Urs Schonebaum presents us with a dimly lit space, squared by four “doors” of light on each wall. A gong sounds. Yes, a mythical Asian gong. I resist rolling my eyes. 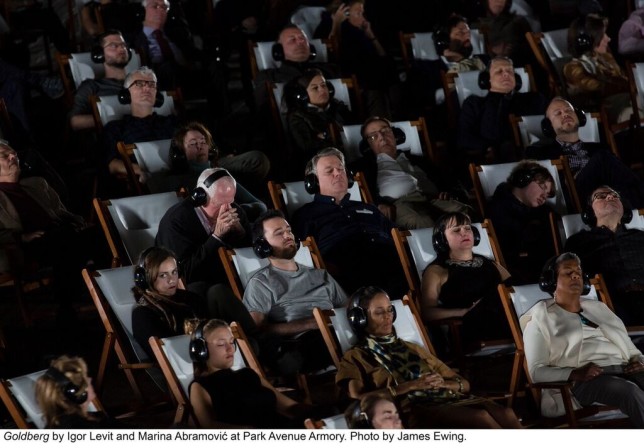 We put on our noise cancelling headphones, and the lights drop. Over the next 20 minutes of relative silence, we proceed to enter the Twilight Zone. I am transported to a science fiction reality right before my eyes. There are hundreds of people sitting together in complete silence, in smudges of white neon light, arranged in a semi-circle around a thrusted, raised, black platform. Frozen robots surround me. Three quarters of the audience promptly close their eyes, and at least half doze. A Wrinkle in Time flashes before my eyes as one woman rises above the rest and turns her head, looking around. All I can think is: YOU ARE DOING IT WRONG.

Just like that, the outlier is sucked into the togetherness, into the whole, the mass. It takes about 10 minutes to relax. Suddenly, I feel a shift around me. A piano has appeared at the end of the black runway; Mr. Igor Levit sitting quietly before it. It takes a few more seconds to realize that he is sliding infinitesimally slowly down to the end of the runway. He mimics his preparation for performance. As he gets closer, he turns and looks directly at me. A connection in the foggy abyss. I breathe in. He leaves my gaze to return to the music in his head. I am nothing compared to Bach.

There is a single moment, when Igor and the Steinway piano pass through one of the doorways of light. All I can think: “Study of a Pianist” should be the title of the image before my eyes. He is hunched before his machine, readying to enter creation. I start to weep. I don’t know why, but two tears fall as grace to the simple beauty. A gong sounds when he reaches his destination. The audience discards their ear covers and enters the world of a mad scientist. The lighting changes to a single, white, neon line surrounding the space, another on the piano. The maestro begins his molding of stories, shaping atoms of sound into a white rose, Victorian lovers running around in gauzy bedclothes, a forest. Sunlight. This is what I see as he rotates slowly. Light and dark, greys and pinks.

My musically inclined companion states definitively to me that it is the best Bach he has ever heard. The guy is a piano monster. He also says the lack of sound before did nothing to him, simply made for a very strange evening. I leave the great hall, my head full of the secret knowledge that the others and I shared an experience in our own little world. Something no one else can understand. This is when I realize something – Marina Abramovic is from another planet. So is the Park Avenue Armory. They allow astonishing magic to happen in the moments created inside their walls. Igor Levit and Urs Schonebaum are the best, world-class, instruments of their orbits.

They created quiet in the loudest city on earth, then proceeded to fill it with molecules of revelation. 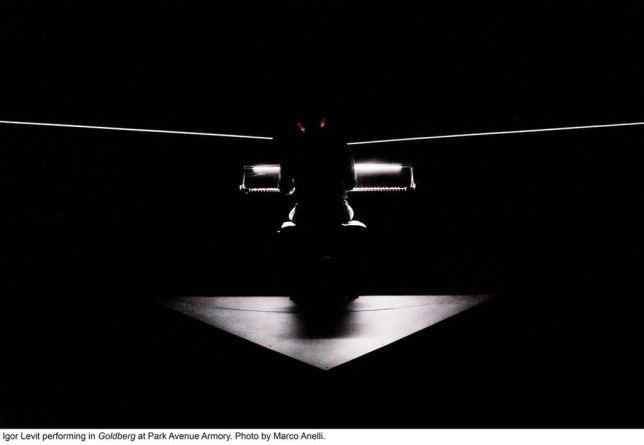