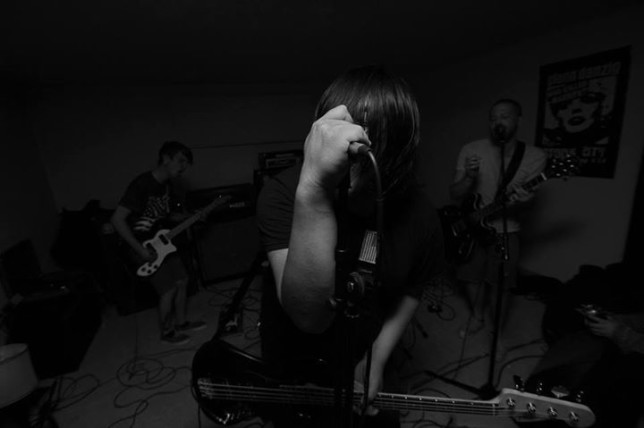 I’m starting to collect stories from independent musicians about the strange experiences they’ve had on the road. Some are sketchy. Some are spooky. Some are gross. Some I just don’t even know what to do with. People are weird, man. That said, enjoy this inaugural installment of Sketchy Tour Tales.

Stepbrothers is a band I talk about a lot; not only are the guys good friends of mine from my hometown, but they put out my favorite record of the year. My favorite records have never been made by local bands before. They’re very hard working and sonically are just about everything I want in a punk band nowadays. They’ve told me this story in person several times, so I thought it’d be a great way to start off this collection of weird touring stories. Thanks to their guitarist Taylor for writing this up!

Stepbrothers was playing the second show of our 16-day spring 2014 tour in Bremerton, WA—at The Charleston. We were mostly happy to be inside, because the moment we got into town it had been raining a concerning amount.

As far as the show attendees, the room included us and the other bands, about 20 people sitting at the bar in the back of the room, and one 12-year-old kid hugging the stage. At first we thought, “Cool, this kid is stoked!” but as time went on this turned into, “Cool, this kid is asking to play Charlie’s drums between every song.”

As our set came to an end we thanked everyone and mentioned that we could use a place to stay. Shortly after this the Can I play your drums? kid came up to us saying, “My mom said you could stay at our house!” Our vocalist and guitarist Patrick immediately said yes. As the night progressed we realized this kid was the little brother to one of the other band’s members, which reassured us that this wasn’t such a bad idea—after all, that guy was cool as hell.

We got to the house at around midnight and the only people in sight were two hippies sitting on the front porch. No one was home. Shortly after a car pulled up—nearly hitting the hitch on our van—and a pile of drunken idiots, that 12-year-old kid from the show, and his mom all got out. The first thing we heard was the mom saying, “Why are they here? I never said they could be here!” Despite this, she let us into their home.

As the night progressed it became clear that the aforementioned older brother we liked so much didn’t actually live at this house. So at that point it was only us, the 12-year-old kid, his mom (who oddly resembled the lady on Monsters Inc.), and over the course of the night, a revolving door of around 40 weird hippies.

The house was disgusting. Everyone was smoking cigarettes and weed inside, leaving the remains all over the ground, empty beer cans were everywhere, and to top it off there was a (presumably) 40-year-old man butchering covers on an untuned acoustic guitar. I don’t remember if he had an eyebrow ring, but I feel like he should have. We sat on the nauseating floor of this house while Patrick kicked this kid’s ass at Mortal Kombat on PS2 for what seemed like hours. All of this happened while the mom was stomping around yelling, “WHERE IS MY WEED?!?”

Finally, we were given a room to sleep in. There was already someone sleeping in the room, but he was kicked out by a host so we could crash. Before this guy left the room he courteously let us know, “You can sleep in here, but I had sex on this [sheetless] mattress last night.” I don’t think anyone really slept that night.

We ended up sneaking out of the house at 5AM so we didn’t disturb any of the unknown, passed-out people littered throughout the house.

Even with all that happened that night, I would do it again everyday forever. Because touring rocks.

Stepbrothers released Why the Fuck Would Anything Nice Ever Happen? on WavePop Records/Ronald Records earlier this year. Go download it for free or buy a physical copy on bandcamp.