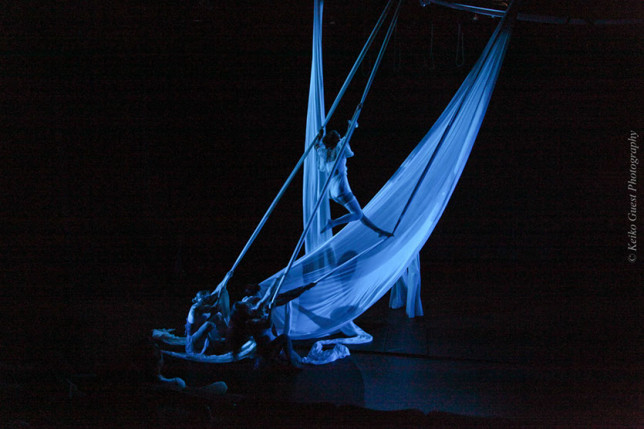 So begins another episode of Revolutions International Theatre Festival, now in its 16th year. The descriptor “sweet sixteen” has never been more appropriate, as Tricklock Company has truly curated another luscious lineup for the next three weeks.

Likewise, Tricklock’s own description of the acts—the shows number in at 21 and come from four different continents—as being “revolutionary” is just as appropriate. In the same vein that Tricklock Company themselves experiment with the art of theater and push boundaries and gauge the line of comfort and foil formalities and reinvent performance, so do the acts that Tricklock, particularly Juli Hendren, curates for the festival. With an adherence to alternative methods such as acrobatics and clowning and wordless theater, Tricklock is not only bringing an international theater festival to Albuquerque (which already feels unlikely), but they’re bringing theater no one expects to see when they hear the word “theater.”

I, with a tamed and professional enthusiasm, got one of the acts on the horn: Rain Anya and Sarah Bebe Holmes of Paper Doll Militia (LA/Scotland) were gracious enough to allow my interview. (They even answered the questions together, which is perhaps a testament to their collaborative strength. Or else they’re just besties.) Paper Doll Militia is the token aerialist feature of the festival, and they’ll be performing Friday and Saturday, January 15 and 16, at AirDance ArtSpace.

Josh Stuyvesant: You guys are all over the place! LA, Phoenix, Albuquerque, Atlanta, Scotland, London. How does the company manage to stay so mobile?

It’s not uncommon for us to be huddling next to a space heater before de-robing into our skimpy aerial costumes to rehearse our show.

Rain Anya & Sarah Bebe Holmes: Part of it has to do with the fact that we run our company out of Los Angeles and Edinburgh, Scotland. So we manage to make a lot of contacts and find opportunities on both sides of the Atlantic. Although our company was founded in the Santa Fe, New Mexico, in 2006, we have been operating internationally since 2011.

We are extremely grateful for our ability to travel and be so mobile. But of course, as with everything, it has its price: mostly, plane tickets. We’re always on the lookout for donated air miles or hotel vouchers, so if anyone has some extra they want to throw our way, they would be put to good use with our company!

More so, how do you manage to stay so cohesive, especially when you find yourselves separated by an ocean?

We have at least two to four Skype meetings a week, and even more when we’re in production mode. We have creative projects that we work on when we’re apart, which often work into our Paper Doll Militia productions.

Furthermore, we schedule in multiple three-week intensive development periods where we come together to develop new work, in addition to performing our current work and teaching specialty aerial workshops. We also have time on our side. We’ve been working together for a decade, so even when apart, we can often guess what the other co-artistic director would say, do or think.

Are you excited for Revolutions?

We’re exited for Revolutions for so many reasons. One, it’s a bit of a homecoming for us, being that our company began in New Mexico, yet we have not been based there for many, many years.

Two, we have an almost entirely new cast for the show. The last cast was based out of Atlanta, which is where Rain was living before. This new cast, which is based in LA, has been rehearsing and gearing up for this festival for the last six weeks. We are all stoked to be working together as an ensemble.

And three, Rain’s brother, Adam Willson, is part of another company performing at Revolutions: Aztec Economy. This was a complete coincidence, as the two companies didn’t even know the other was in conversations with Revolutions for this year. It came as a complete surprise and added perk. Definitely check out their show, Butcher Holler Here We Come; it is amazing!

Revolutions is all about “seeking out and presenting the planet’s most revolutionary theater and performing arts.” Would you mind describing how you feel aerialism and its recent surge of popular recognition fits this description?

Aerial and circus arts have had a dramatic surge in popularity in the last few years. Yes, it has led to numerous aerial and pole studios popping up; it has also led to more experimentation and boundary-pushing within the theatrical form.

From the very conception of Paper Doll Militia, our mission has always been to utilize the skill sets from aerial arts, and see how it can expand the genre of theater and storytelling. We work with a lot of visual design, character work, and cross-disciplinary elements. This type of approach is starting to become more visible and accessible.

The idea of “Contemporary Circus” (post- Cirque Du Soleil) has become more and more developed and accepted in Europe and Canada. However, the United States is a little slow on the transition. We find that audiences in the United States still have a hard time separating circus arts either from peanuts and elephants, or from the entertainment world with Vegas-style shows. Showing this country how circus arts can be integrated into the fine arts sector is not only revolutionary, but also necessary. 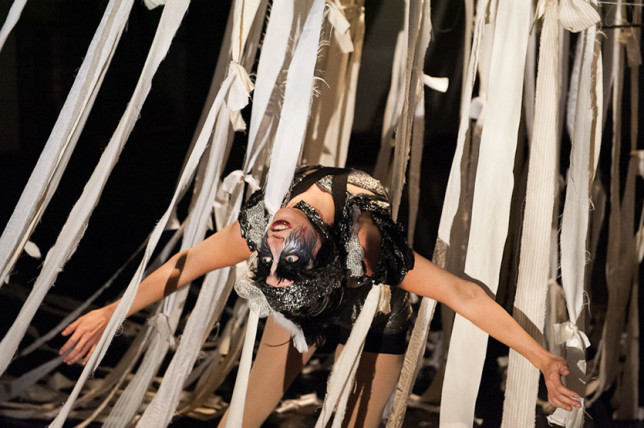 Paper Doll Militia invests much of itself into teaching others the art of aerial acrobatics. I understand that much of this education revolves around the inherent storytelling aspects of aerialism. Can you elaborate on why you find aerialism to be such a powerful medium of story?

Using the entire vertical space with aerial arts allows for us to play with theatrical devices that would otherwise be unavailable to us. It also lends itself to ideas of the superhuman and limitlessness. A lot of times, our apparatus helps inspire conceptual starting points and character work. For instance, our show Unchained is all based around the hard and industrial nature of chains, including concepts of containment and oppression. From this conceptual starting point, the story and the characters were born.

And frankly, please, why do you love the art so much?

To quote Picasso: “The purpose of art is washing the dust off our souls.” For us, we do art, because there is no other choice. We can’t imagine a world without art, and frankly, when we are not creating it, we start to have existential crises.

What are the intrinsic challenges that come with touring an aerial show? Are there any knots that other mediums might never have to face or overcome?

There are many! We’d say the main issue is the challenge in finding a venue that can accommodate aerial arts. Actually, for this festival, Revolutions ran into several roadblocks around this, but were lucky enough to have found a home with AirDance ArtSpace, which is designed and set up for aerial work.

We also have a lot of kit and gear that we have to lug with us. A common expression you’ll hear us use is, “Our show is made of pulleys.” We need to add in sufficient warm-up and cool down into our rehearsals, and we’re often working around minor injuries, and the temperature/dryness/humidity of the space heavily effects our ability to do our jobs.

Most rehearsal spaces (and even some performance venues!) that have enough height and space to accommodate us don’t have heat, so it’s not uncommon for us to be huddling next to a space heater before de-robing into our skimpy aerial costumes to rehearse our show. Even our costumes have to be specially designed so that they won’t get caught up in the equipment. There are a lot of elements to consider when producing aerial theatre.

What can Albuquerque expect to see and feel with LoopsEnd, the show Paper Doll Militia is performing at Revolutions?

LoopsEnd is comprised of two aerial theater “shorts.” Unchained is an aerial duo that takes place on chains, and has an eerie and dark conceptual framework. Crossroads is an ensemble piece that utilizes three white silks, five aerialists, and one stilt performer. We’ve had great feedback from audiences who have come to see this show, especially those who are already familiar with aerial arts. One of the responses we hear on a regular basis is how LoopsEnd uses the aerial apparatus in an innovative way that is not about the spectacle or tricks, but instead transports the audience into another environment.

The two pieces that make up the show were each conceived in different ways. As we spoke about earlier, the concepts for Unchained were inspired by the apparatus itself. For Crossroads, we worked with the original cast’s own personal “crossroads stories” from their lives. From these stories came images, archetypes, and eventually a thread of vignettes which create an arch for the ensemble. In weaving the two pieces together, more discoveries were made in the way of symbolism and relationships between the concepts in this polarized but complementary show.

Can you please give me your top tidbit of advice for each of the following three things: touring, collaboration, and performing?

Performing: If you don’t set limits for yourself, they don’t exist. And, it’s about a deep investment in being present. Being onstage is the here and now.

Thanks so much! I’ll be the guy on the edge of my seat at AirDance if you want to throw me a wink from the silk.

Paper Doll Militia is performing LoopsEnd January 15 and 16 at AirDance ArtSpace as a facet of Revolutions International Theatre Festival. For the complete schedule and for festival passports, visit the Revolutions site.