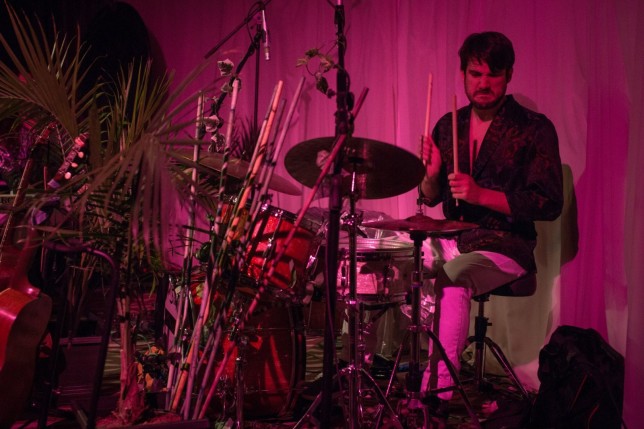 The look of a man who wants to flick his ears. Photo courtesy of Arc Iris.

I’d like to start this off with a thought experiment. Take a moment and make a mental list of all the things you do behind closed doors. Be honest with yourself. I’m not talking about your deepest, darkest secrets (hopefully you’re not a closet serial killer). What I’m talking about are the crude and quirky things we all do when no one is around, things that are ultimately harmless but socially unacceptable when in the company of others. Nail-biting, nose-picking, crotch-scratching—you get the idea. I myself indulge in all three of these, and my guess is that I’m not alone.

For instance, take Johnny Hypothetical. Johnny Hypothetical is a habitual nail biter. He works a nine-to-five office job and struggles to not bite his nails at the workplace. His coworkers have all expressed that they find it disgusting, and since Johnny is both considerate toward others and conscientious of his reputation, he manages to keep his habit under control.

I pick onions out of my food, I prefer to drink water out of very small glasses, I don’t like closing doors all the way.

However, once he goes home and the proverbial door has been closed, he is liberated by the freedom to bite his nails all he wants. Both Johnny’s fiancée and dog still love him in spite of his obsessive-compulsive habit, and at the end of the day, all is well in the world. What I’m trying to say is that for a guy like Johnny, biting his nails—more accurately, having the privacy to bite his nails—is a pretty big deal.

For touring musicians, there is no distinction between home and the workplace. Everywhere is both, and everywhere is neither. The proverbial door never closes because there’s no door to begin with. There is no privacy, and there is always someone around.

I am going to volunteer you to partake in an imaginary scenario: You have joined a touring band. For the next two months, you will be traveling around the country and performing concerts to hundreds of people a night. On paper, it sounds like a blast, but in reality, you will be spending anywhere between two to nine hours a day cramped in a van driving from city to city, perpetually side by side with your bandmates.

You will probably eat just twice a day, one mediocre meal while in transit, then a proper meal from the venue you’re playing. By the time you finally get to perform, you will be tired, but hopefully it will be the highlight of your day. After that, you probably will stay on a friend of a friend of a friend’s couch, arm’s length away from one of your bandmates who is sleeping on a mat on the floor.

You will wake up in the morning, perhaps due to your bandmate’s snoring, after no more than five hours of sleep. You will wash, rinse, and repeat this pattern until the tour is finally over. Depending on the logistics of your schedule, you may not get to wash and rinse as much as you’d like, though there will be plenty, plenty, plenty, plenty of repetition.

Now, back to our thought experiment. I’d like you to juxtapose your mental list of things you do when you’re all alone with the lifestyle I’ve just described. Is your list short and indifferent, or is it long and impassioned? If it’s the latter, you probably can empathize with Johnny Hypothetical, and if you can empathize with Johnny Hypothetical, then life on the road is probably your worst nightmare. However, touring is all about compromises, and even the Johnnies of the world end up figuring out a way to adjust.

But at what price?

For a guy like Johnny, the habit of nail-biting is more than just an unflattering indulgence. It is a small but crucial component of the larger operating system that runs his life. Without a proper distinction between the workplace and home, that component is compromised, and as a result, the whole operating system starts running less efficiently. Since Johnny is not a product manufactured by Apple or Windows, he can’t just go in to the local computer store and buy a new operating system for himself.

This leads me to the question that is at the heart of this article: How many components of your operating system would you be willing to compromise before you started to malfunction?

No matter where I am in the country, I will always be revolted by the physical touch of knitted quilts.

I ask myself this question all the time, except the difference is that it’s not hypothetical. It’s very real. I play drums in a band called Arc Iris, and we spend about six months out of the year on the road. Over the last two years, we’ve played a dozen festivals in both the US and Europe, opened for a handful of incredible artists, and accumulated a small, dedicated fanbase that hopefully foreshadows a lifelong career for me as a professional musician. Inevitably, we’ve had some remarkable experiences that lend themselves to good stories, yet here I am writing about nail-biting, nose-picking, and crotch-scratching. Why?

Because I empathize with Johnny.

I never knew how sensitive my operating system was until touring became a regular part of my life. Sure, I was previously aware of my obsessive-compulsive tendencies—a high school friend used to called me Captain Quirk—but only recently did I learn how integral these tendencies are to my operating system at large.

For example, I have always had a tactile “obsession” with ears. I flick and bend my ears probably over a hundred times a day. For me, it’s not something I consciously think about. It’s something I’ve always done and probably always will do. Of all my quirks, this is probably the most benign because it affects no one directly except me.

However, something like my extreme revulsion toward knitted quilts—yes, you read that right—is a little more complicated. When a host who is putting up the band for the night takes a knitted quilt out from the closet and offers it to me, I always have to explain that I’d rather shiver myself to sleep in the freezing cold than have one of those things touch my skin. I pick onions out of my food, I prefer to drink water out of very small glasses, I don’t like closing doors all the way—the list goes on.

On paper, I may sound like a dreadful person to be on tour with, but like Johnny, I try my best to be considerate toward others and am conscientious of my reputation. If my idiosyncrasies were absolutely intolerable, I probably would be kicked out of the band, and no one would want to work with me as a freelancer. However, I am still a member of Arc Iris, and the phone keeps ringing with gigs.

If I worked an ordinary nine-to-five job, none of these quirks would be a big deal. Really. Think about it. I would not be sleeping on strangers’ couches every night, thus minimizing my contact with knitted quilts by one hundred percent. I could leave every door open just a crack and would be free to use the tiniest glass in the house for my water. However, touring life is so unpredictable that, in a backwards twist of logic, the consistency of these quirks is one of the few things that keeps me grounded while on the road.

Even when my quirks work against me, there is a strange comfort in knowing that no matter where I am in the country or in whose home I’m staying, I will always be revolted by the physical touch of knitted quilts.

If you ever have the chance to host a band at your house for a night, I ask you to remember this: Johnny Hypothetical is real, and he is not trying to give you a hard time when he declines your knitted quilt. In fact, he himself is probably the one having a hard time. If he is trying to give you a hard time just for the sake of it, then he’s not the Johnny Hypothetical we’ve been talking about. That guy is just an asshole.

Ray Belli is a New Jersey-born drummer who primarily performs with the experimental pop (???) band Arc Iris. He currently resides in Providence, Rhode Island, where he lives with two cats, two bandmates that resemble cats, and a girl with purple hair who is allergic to cats. He also performs and records as a freelance drummer throughout New England and the Tri-State Area.

He is available for hire as a Jim Morrison impersonator at your next party as long as the price is right and the catered food is vegetarian and onion free.

View all posts by Ray Belli →