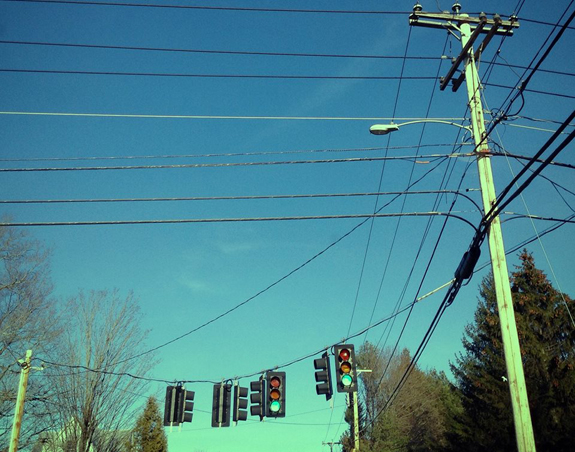 T-Minus 18! This post is part of an 18-post countdown to Amy Stacey Curtis’ next and final solo biennial in Maine mill space. After MEMORY, her upcoming biennial, she will have completed nine solo biennials over 18 years, with 81 massive interactive works, all told. She’s been unloading her process on Pyragraph as we countdown to MEMORY. Read the series here.

When I approach a traffic light, I prefer a red glow. Every green light generates a mild angst in my gut, and my hands squeeze the steering wheel tighter. I see the green light ahead. My right foot anticipates sliding to the brake.

I suspect I’ll be hesitant, at first, to start again.

After beginning this work in 1998, I set for myself an hour-by-hour schedule which I’ve followed the last 18 years. My months, weeks and days have been strictly pre-calculated and -organized. I’ve known the contexts, sites and framework in which I will work since 2000. And since 1998, I’ve been going, going, going….

I’ve found comfort in this going, going, going—knowing, for the most part, what’s ahead of me.

I say, “For the most part,” because all kinds of unexpected things happened along the way. Here are just two kinds of things:

1. Giving my work over to my audience

A major aspect of my work is giving it over to my audience once each solo biennial opens for participation. Each installation is accompanied by succinct instructions participants are required to read before approaching. This is to guide them on how to activate, sustain or conclude the concept.

Participants are asked to change, advance, shift, add to and take from the installation to bring it from a beginning I instigate to an end only they can collectively achieve. The audience completes my creative process; without their purposeful participation, my work is unfinished and static.

However, part of my work’s relinquishing is that whatever is meant to happen, happens. I don’t mean the audience makes something utterly different take place; I mean the process takes twists and turns before reaching where I hoped it would.

I’ve felt safety and calm in moving forward along this 18-year trajectory.

Participants were asked to choose three cubes randomly from this side of the wall, and to place them in order, “1” through “2,700,” on the other side of the wall. Once all the cubes were sorted, or once the exhibit ended—whichever came first—the installation was complete.

Most participants I observed would choose numbers they wanted to sort rather than choose randomly. Twist. And, many would choose not to put their cubes in order on the other side. Turn.

But what got this installation, like most others, to the destination I sought were the “righters.” The more-than-many participants, who, like me, preferred the planned end. The righters “righted” the “wronged” cubes, finding out-of-order cubes to put them in their “right” spots.

2. The tolls of physical work

Another kind of thing I could never plan was how much this extreme labor per solo biennial affected my body. I had no idea, for example, when I set out to transform my 2008 mill space (for LIGHT, in 2008) that I would severely injure my back.

I clean by hand, clear, and sometimes bring up to code each respective mill (the spaces I use average 25,000 square feet). This is a process I complete, along with the installation of my work, over the course of nine or 10 weeks.

The mill I cleaned for LIGHT had last been used as a paintball space. So I cleaned and cleared it for three months before I was to start my two-month process of installing.

I was crushed when my chiropractor told me the pain and numbness I felt in my legs and feet meant I had to stop. I had to stay on my back for at least one month, otherwise I would have to cease my 18-year project altogether.

But, the show went on.

Fifty friends, family, artists, patrons, and curators travelled from all points of Maine, making certain my 2008 solo biennial opened on schedule, taking verbal instruction from me as I lay, confined for one month to a bed installed in the mill’s center.

The point of my writing about these unexpected things is that even with the twists and turns, I’ve felt safety and calm in moving forward along this 18-year trajectory. And this forward momentum is soon going to end.

My ninth and final biennial, MEMORY, will be open for participation in a Maine mill to be announced in Fall, 2016.

I suspect I’ll be hesitant, at first, to start again. As I approach the intersection between my past 18 years and whatever’s next, whether the light is about to turn red, or it’s green all the way through, I’ll try to look ahead, pass under this green light, and speed into whatever road lies ahead no matter what twists, no matter what turns.