Why is it so bad to wear socks with sandals? I am a painter, and I feel that in most respects I am a fairly fashion-conscious person who tries to keep up with trends and maintain a modern-yet-bohemian appearance. There are some times (especially now, in cooler weather) that I really feel like wearing my birkenstocks with some cozy socks to my art openings.

But I always stop and think “better” of it. “No,” I tell myself, “people will laugh. And then decide to buy art not from me, but from someone who wears closed-toe shoes to their openings.” Then I go out with just my bare feet in my Birks and end up suffering from chilly toesies. Or, if I decided to wear another brand of shoe, my feet scream in protest and my back hurts for days on end. Birks are best for my body, but perhaps are bad for my career. What should I do? 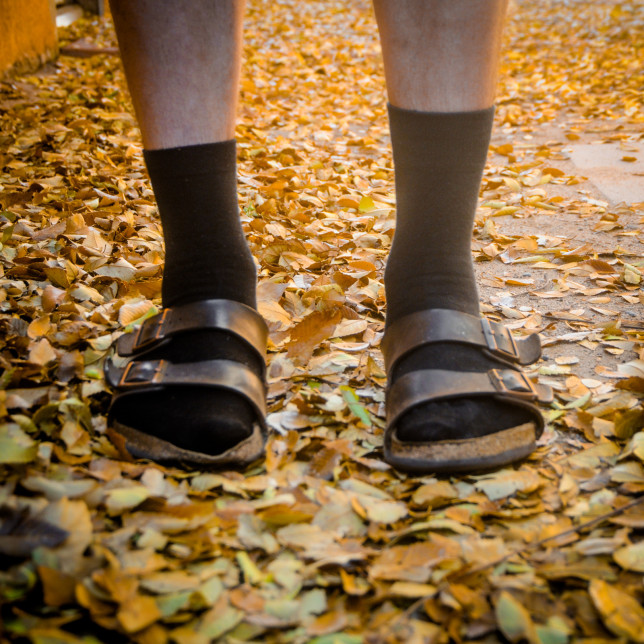 My favorite band is The Beach Boys. And they have a song that goes, “Oh my, how she boogalooed it to me! Come on sock it, sock it to me! S-O-C-K-I-T to me!”

Anyways, onto your question. If it were me, I would wear whatever shoes I want to wear for the comfort of my back, but since I’m never one blend in with a crowd, and because as an artist/performer I LIKE the attention, I would jazz it up.

A few years ago I found some bright pink and black striped socks for a dollar in the discount girls’ section of a store and I thought, “Those look fun.” So I wore them to my shitty corporate job (Whole Foods) the next day. After many hours of customer after customer saying, “Wow, I like those socks. They are fun,” the store manager came up to me and said, “Why the hell are you wearing THOSE socks?”

She looked at me with her unconventional hairstyle (a god-awful mullet) and she raised her voice and said, “I don’t want to be the sock police! I ALREADY let you wear eyeliner!” And then she stormed off like an angry b#@ch who has spent her entire life unhappy because society doesn’t accept her and her life, poor thing.

After working there for 12 years, I quit because of shit like that.

I soon found myself in need of a job and ended up working at a local co-op grocer soon after. After about a month of being there, after I had felt out the vibe of the place, I wore that same damn pair of socks and my new boss came up to me and said, “I really like those socks, they are fun, and your eye makeup is too!” I was making less money but I was much happier.

And since you also mentioned stocks in your question, I’ve been watching the stock price of Whole Foods plummet as they make national news for implementing large corporate layoffs and other terrible things they do. So those socks helped me out in the end.

So, sir or ma’am, I would recommend that you wear whatever the hell you want to wear. Your socks and sandals are not hurting anyone except for people who must have sticks up their asses so far that there is room to put an additional stick up the ass of the original stick!

Although, speaking artist to artist, I would recommend that you go ALL IN. Go get some REALLY fun socks; they are friggen cheap! I bet that you will sell MORE art, not less as a result. Come on, do you want to attract attention or not?

—Little Bobby Tucker
“Sock it to me…
Floatin’ down the river
With a saturated liver
And I wish I could forgive her
But I do believe she meant it
When she told me to forget it
And I bet she will regret it
When they find me in the morning wet and drowned
And the word gets ’round
Goin’ down
Goin’ down” —The Monkees, 1967

I don’t know if I should be concerned about a situation. I recently opened the bathroom door and found my five-year-old son with his best friend who I’ll call Johnny for the purposes of this letter. Both of them had their pants down and were putting their thumbs up each others’ butts. He laughed and said, “Look mom, Johnny can fit his finger in my butt!”

I was pretty calm about it at the time. I didn’t want to make a big deal about it because I know that they are just little boys being kids but I want my son to understand boundaries. Any advice on how handle it?

—Should I be Worried? in Rio Rancho, NM

I used to live there too. Why did I leave? Because of Rio Rancho’s economy being overly dependent on the Intel Corporation, Walmart, call centers and other examples of profits over people. It is dehumanizing. For example, all six members of the Rio Rancho City Council are Republican. Count ’em: all six! And it shows. The economy is built upon exploiting the poor. And the culture is based on taking from the poor and giving to the rich. It gives us ultra-capitalism, a Republican economic model that rewards greed while attempting to punish empathy. This ignorance and greed result in a social conservatism that is openly homophobic, anti-immigrant, anti-Woman, anti-other. It is afraid to explore. It is almost as if these folks did not investigate their own buttholes enough when they were children…Where was I? Oh yeah, your question about the finger!

When I was a child I explored basically everything that I could think of! And there were a few times I did these things with kids my own age: a “show me yours and I will show you mine” kind of thing. By the time that I got to junior high I was sticking THIS up my butt and I was sticking THAT up my butt, so I can empathize with your son.

I can also empathize with you. If I walked in my child doing that sort of thing with another child, I would definitely want to speak with them, about understanding boundaries and about exploration, the exact opposite of boundaries. It isn’t always an easy balance to find, much less maintain. This curiosity about ourselves, about our bodies and the bodies of others is a natural part of our biology—the birds, the bees and the monkeys in the trees.

A lot of the negative issues in our society are a direct result of our collective ignorance. We don’t value sexual education or exploration. We don’t value the other. We value exploitation, not exploration. Exhibit A: The Republican Party. In December, a Republican state representative from New Hampshire named Josh Moore posted on Facebook—and I AM quoting—that if women want to breastfeed in public that they “should have no problem with a mans inclantion to stare at it [her nipple] and grab it.” The typos are his, by the way. Isn’t…that…cute?

Please be open and honest with your son so that we have fewer people like Representative Josh Moore in this world.