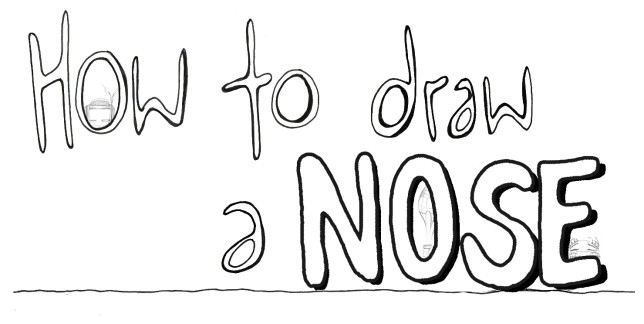 A few months ago something terrible happened to me (terrible being used very loosely in this instance). Two people in my life, two days apart from each other, made comments in reference to their smiles being similar to my drawings. The face they made? A wide, toothless grin, with eyes closed, chin turned up.

For you, this means absolutely nothing. “That’s cool, they’re referencing your happy dudes,” you may be thinking. Well let me tell you, you’re wrong. No, it’s not cool, not at all. You know why? Because my drawings, my dudes, they don’t even have mouths. They have noses. Tired eyes, and very big, very wide, noses.

It was like a hit square on the nose (by nose I mean nose, not mouth).

If you’re a normal and fully sane human, which I assume you are, you will not understand why upon learning that everyone thought my characters were slightly smiling creatures without noses, I had a reaction which can only truly be described as a psychotic break, involving too much wine and non-ironic thought about the meaning of my existence. But let me explain, please, and then let me ask you for some advice.

If you are an artist (or human really), you understand that a large portion of your time and your brain is put into your work. The same is true for me. What may be different, and what I did not realize until the unfortunate misunderstanding of the nose/mouth, is that I put a large part of my personality and demeanor into each of my characters. These dudes, sometimes like myself, float through their respective universes with a blank expression. No upturned smiles to indicate their fake shows of happiness; no frowns to define their insurmountable sadness; just blankness and room for the conglomeration of feelings and emotions unseen. Whether this guards them from their surroundings or shields the truth from the viewer, the lack of emotion shown via mouth allows for the dudes to live safely unjudged, and maybe even sometimes admired.

The fact that no one got this, even those very close to me, was like a hit square on the nose (by nose I mean nose, not mouth). So the questions became: Do I start to draw the noses smaller? Do I draw a mouth below the nose, so said nose is more clearly a nose? (Which I actually sometimes do, in the form of a dot.) Do I start from square one and relearn how to draw figures and faces? Especially the holes in their faces? Do I stop drawing dudes altogether?

The answer for me came quickly after that last question. No.

Stay with me now, I know you’re probably exhausted of my crazed ramblings, and of me saying “nose,” but here is where I ask for your opinion. Is it okay for me to go on, style unchanged, drawing noses the same as I always do, letting viewers continue thinking they are mouths? Do I continue to draw as I do, hoping to portray a certain mood, knowing full well that it is being wholly confused for another, possibly very different and slightly happy one?

This then, lends itself to a much larger question that has faced art forms of all kinds forever: Just because you don’t understand a piece as it is intended to be seen by the artist, is your interpretation any less valid, important or relevant? If these lines are mouths to you, and you connect with and actually enjoy these smiling dudes, is my art any less of a conversation, any less of a bridge of thought between you and me than if you had seen them as noses?

I’ll let you think about it.

In the meantime, I’m going to let you live in your world.

And I’ll keep on in mine, full of noses and insanity. 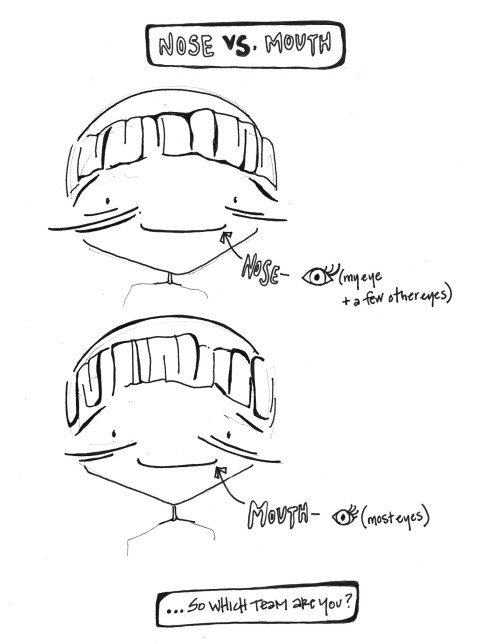