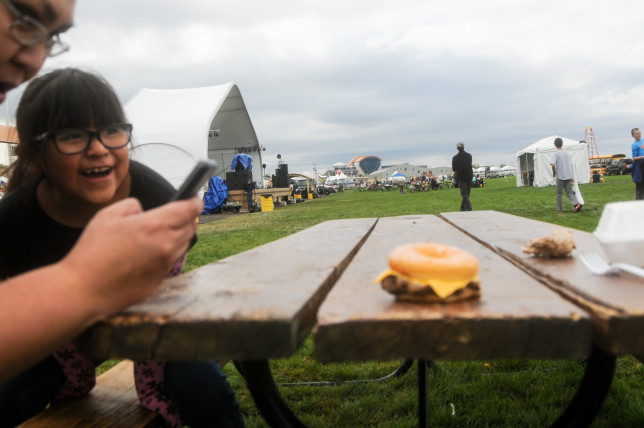 Festival goers love taking pictures. These two, amazed either by the Donut Burger itself or the fact that I was photographing it, jumped right in to capture the excitement of my picnic table shoot. Photo by Clarke Condé.

A media tent is like a hotel bar, which is to say it’s like an inviting, abiding refuge, whose only variable is a changing address. The sign on the flap says, “Welcome to the Albuquerque Balloon Fiesta,” which I read as, “Welcome, photographer, to the challenge.” A challenge, indeed, for not the World Cup, nor the Hajj, nor the Indian Kumbh Mela Festival or even Fashion Week in Paris comes close to the Albuquerque Balloon Fiesta for the sheer volume of photographs taken at an event. Organizers claim 25 million photographs will be taken during the nine-day Balloon Fiesta. So ubiquitous is the balloon photo that it has become the Instagram filter icon. Last year at this time I was in New York shooting food and fashion, and now here I am in Albuquerque, New Mexico, stepping into a media tent. Where am I? What am I doing? 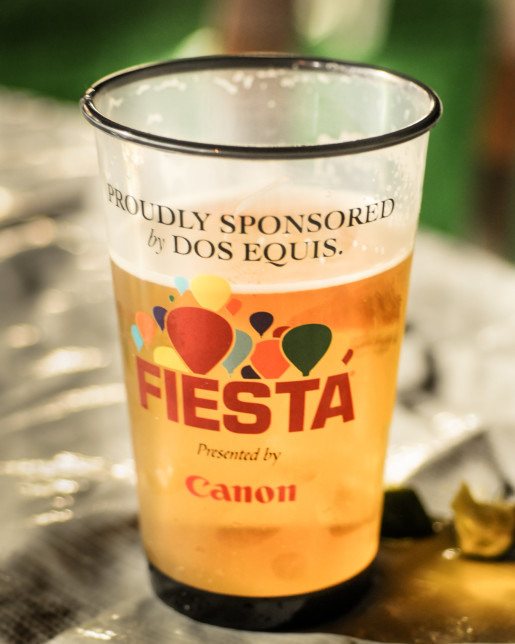 Only the world’s finest (and bravest) events combine the media with an open bar. Photo by Clarke Condé.

The Balloon Fiesta offers a photographer a challenge unlike any other: How do you photograph the most photographed event in the world? Why would you, some may say, but does an actor ignore Shakespeare because it has been done before? Does the poet look down on the haiku because of its restrictive form? Looking around the media tent, international as it, I see neither western bard nor eastern poet, so I write my own haiku in the margin of my balloon-related event schedule:

has way too many people 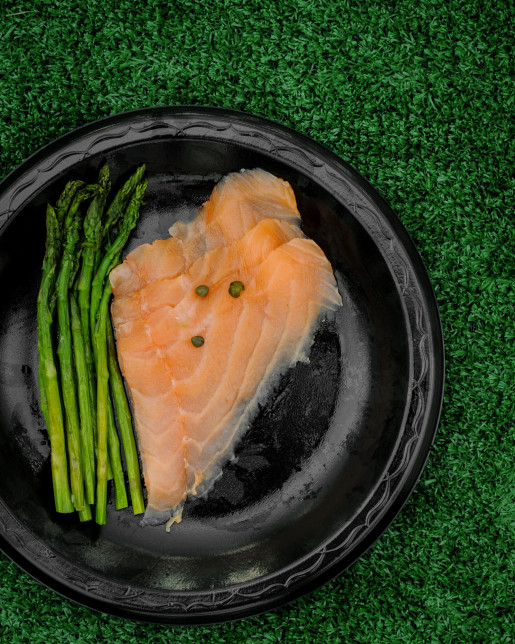 Salmon and asparagus on the menu for the media. Very nice of the organizers. Photo by Clarke Condé.

Maybe it’s the place for the new camera I read about that was designed to prevent the cliché photograph from being taken. The machine works off GPS to block the shutter when you try to take a picture where others have before. Its inventors must have had the Balloon Fiesta in mind, but as a photographer whose work has focused on the concept of place, a camera like that would have prevented most of my quarter-century’s worth of work. It doesn’t take an atypical place to make an atypical photograph. In my experience, it’s usually the opposite. 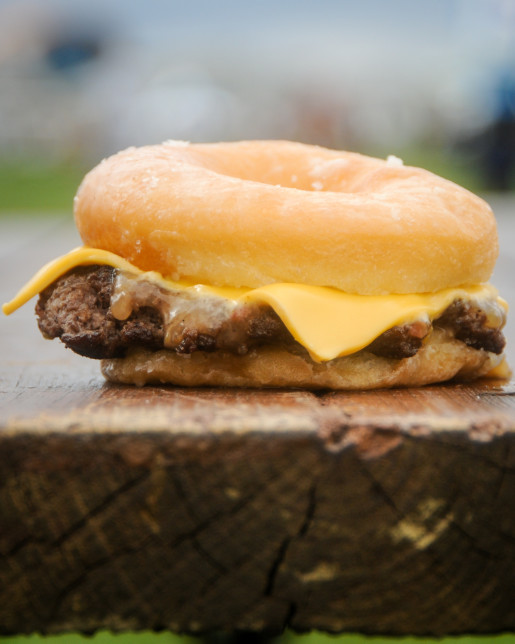 Behold – The Donut Burger. The apex of American burgermakery, the Donut Burger is a beef patty sandwiched between two glazed donuts with a slice of American cheese. Available with bacon to push the calorie count north of 1000, or the New Mexican variation with green chile. Photo by Clarke Condé.

As a newspaper photographer, I spent years photographing the most boring events on assignment (grin and shakers, guy at podium, protesters not getting beaten up, etc.), and invariably there would come a point at the shoot where I would look around for a good shot, find nothing interesting and want to leave. Stymied, I would remember the great Annie Leibovitz on the White House lawn jockeying for position to get the expected shot of President Nixon waving goodbye as he boarded Marine One for his flight of disgrace out of office. But she didn’t do that. She couldn’t. So she just hung back, watched and found the shot of the Marines rolling up the carpet as the downwash from the helicopter blades blasted the scene. It is an image that has stuck with me since I was a teenager and a story I have relied on as a reminder that there is always a shot to be had on any assignment, even if you haven’t found it yet. 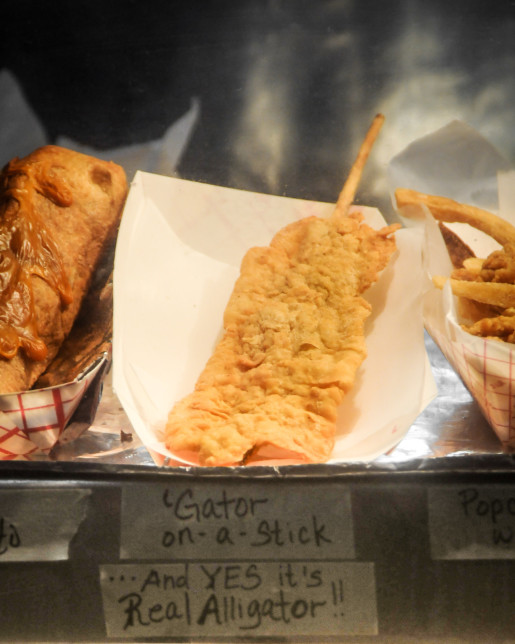 You will not find fake alligator at the Albuquerque Balloon Fiesta. This is genuine ‘gator-on-a-stick. Photo by Clarke Condé. 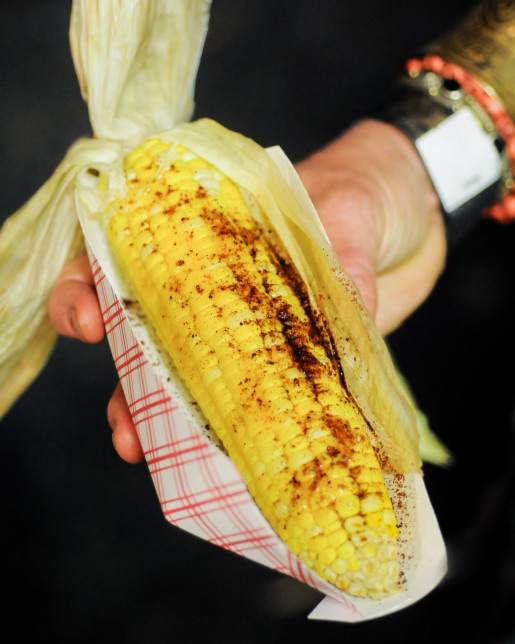 Corn on the cob with butter and paprika is likely the simplest and tastiest of the offerings at the Balloon Fiesta. Photo by Clarke Condé.

So what is my approach? Do I rush in and begin madly snapping up the balloon shots like a chicken eating bugs off a compost pile, or do I approach with another objective? Am I trying to say something, engaged and actively searching or even forcing the moment to happen? Or am I experiencing the moment and placing myself at that point, camera at the ready, when it presents itself before me? 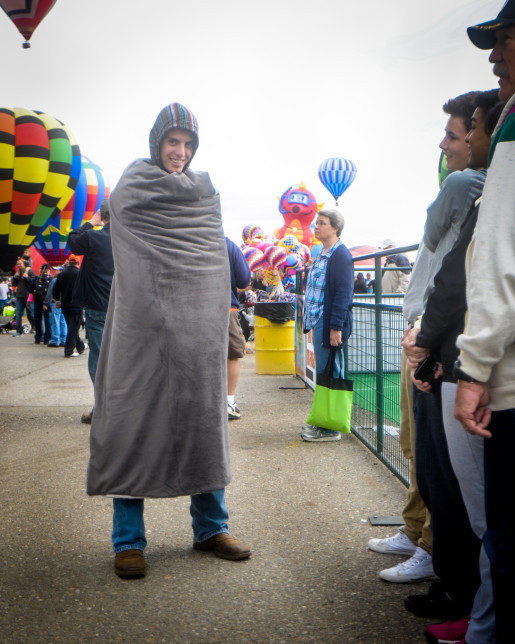 While the muddy construction boots say, “I’m ready for the Balloon Fiesta,” the blanket wrapped in a way that could only be achieved with assistance says, “I got here too early and I am still very cold.” Photo by Clarke Condé. 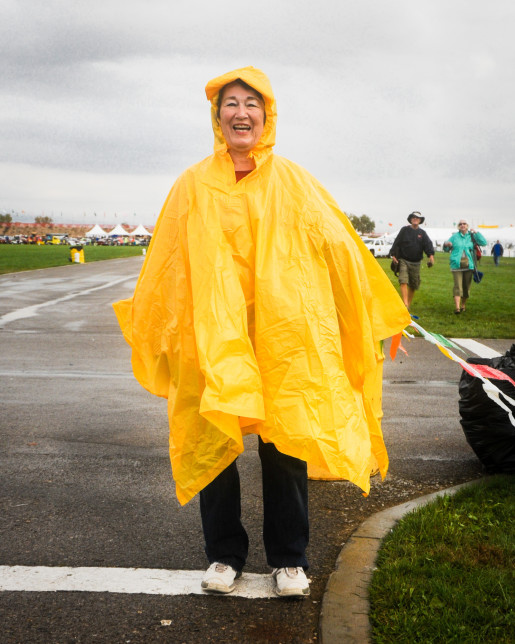 Her husband said she looked like a lemon and stepped out of the shot. Photo by Clarke Condé. 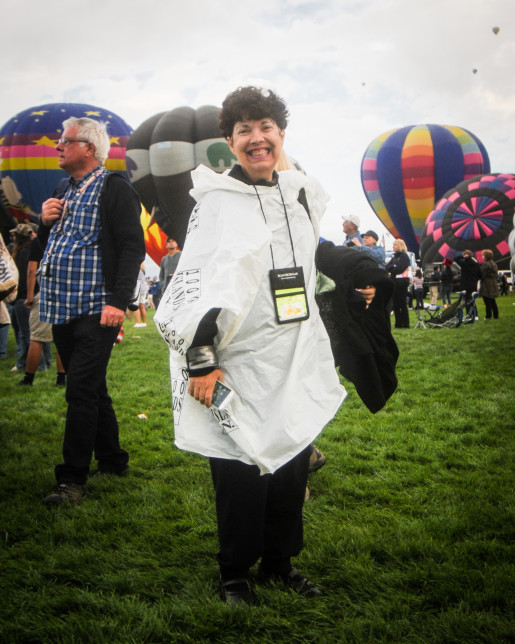 Balloon Fiesta fashion is not merely to style in accord with the weather. Case in point—the Thousand Islands Poncho. Versatile, packable, waterproof—this rainwear says you know something about dressing. Photo by Clarke Condé. 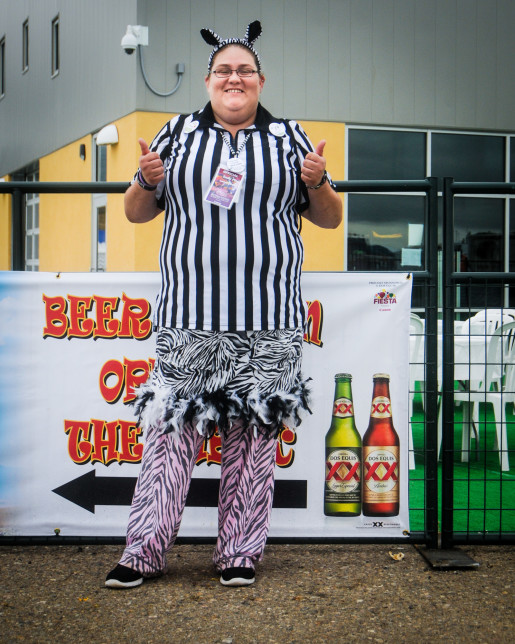 Balloon Fiesta fashion extents to staff. Like an aircraft carrier’s yellow shirts, the Zebras are distinctive for visibility as they run flight operations for the Albuquerque Balloon Fiesta. Photo by Clarke Condé.

I have come to the Balloon Fiesta to shoot the most neglected aspect of this truly American phenomenon (the food and the fashion) and I will shoot it the same way I shoot everything—my way. Maybe as a civilization this is the time when we take more photographs than ever before, and maybe this is the place where more photographs are taken than any other place on earth, but only the ones I take are going to look like mine, that’s for sure. There are still photographs here to be taken and I am a photographer, one who, at the moment, is in a media tent wasting time. Undeterred, I step boldly out of this media tent like I have every other media tent, hotel bar and my own front door and into the banal breach that is the Albuquerque Balloon Fiesta, camera in hand, to get my shot. 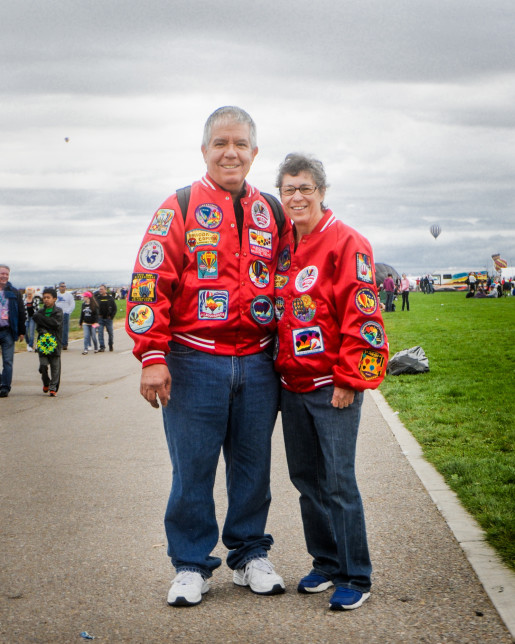 The best that I can tell is that the pins and patches of the Albuquerque Balloon Fiesta are like the Pokémon of the AARP set. Photo by Clarke Condé. 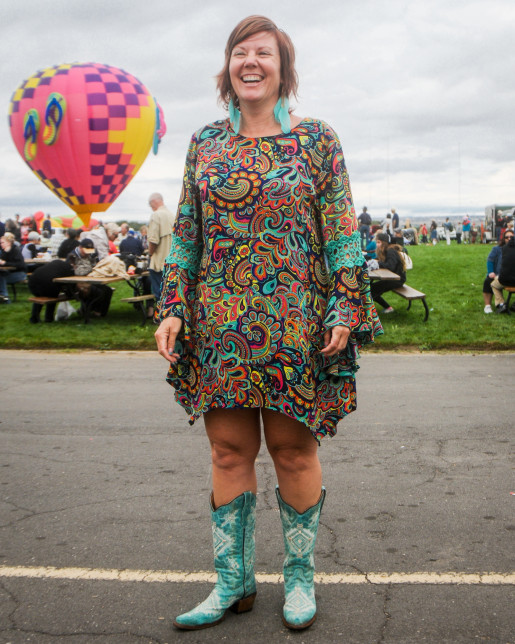 The word on Balloon Fiesta fashion today is turquoise. Photo by Clarke Condé.