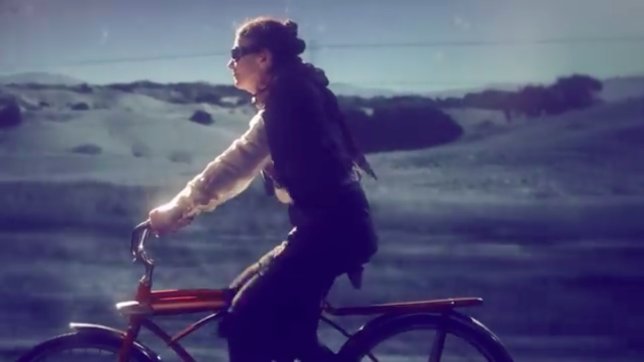 This video is magic. As a musician and DIY music video-maker, I’m totally entranced by this thing. It’s one take! It’s magical realism! It’s gorgeous!

Directed by Andrew Laurich, whose projects (including this one) have received acclaim and recognition and cries of, “Why, that man’s a creative genius!”

Here’s what I gather about the way this video was made. There was a great big team of people (there are about 40 people mentioned in the credits). There was a green screen (or seven). There was a bike. The thing was shot in an extremely careful, meticulous way to make it seem as though it was shot all in one take. There’s a lot of digital magic and a lot of analog magic. (Just look closely at how the sun first appears in the sky within the first few moments of the video!) And there was a shit-ton of post-production on this thing. Beautiful color grading work, special effects.

There was money, is what I’m saying.

As far as the music videos I make go, mostly fall into one or two categories: the kind that take more planning and rehearsal than post-production (the kind I prefer to make) and the kind that take more post-production than rehearsal. (And we make them with very little money happening.) “Old Bike” is both of those: It clearly required a lot of pre-production, planning, and rehearsal, and a lot of post-production. It’s fun to imagine how they juggled the actors, props, etc., to make the whole thing fly visually. I’m not even sure how one allows for all these variables.

It takes a lot for me to connect with new music. But this is a song I fell in love with, and the video probably has a lot to do with that.