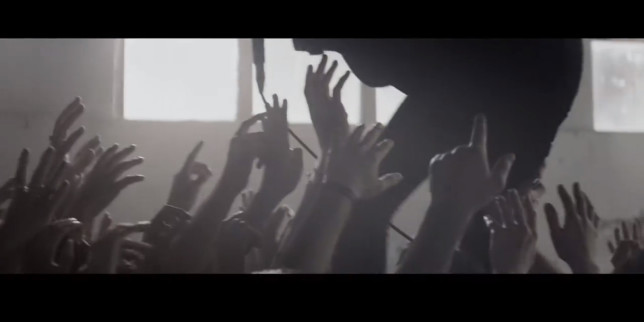 This video looks like what shooting bands for my zine as a teenager in the ’80s felt like. Getting the shot from the pit. Climbing onto the stacks or the bar. Pushing into that ever-changing sweet spot between the bouncer who likes you and the bouncer who really doesn’t like you (but can’t get to where you are because the crowd is so dense). In those days I would brandish “The Smasher”—my Pentax K1000 with the busted aperture ring on the 50mm lens and shoot everything wide open. I had to get close and I had to focus, but I didn’t have to worry about my camera. I would get knocked to the floor and ten hands would pull me back up as just I kept shooting. Battered and bruised, I could sort out what happened on those nights in the darkroom the following afternoon.

In the case of this new video, “The Answer” from the British band Savages, director Giorgio Testi has found a way to capture absent solid footing that a good show creates. Intimate camera angles and percussive visual tempos don’t mirror the song as much as reflect the experience of being in a small, sweaty room with the band. Trying to dissect the shots on this video, I am convinced he often just strapped a GoPro onto a raccoon and threw it into the crowd.

With previous stints directing live performance videos for the likes of The Killers and Blur, Testi has said he directs camera operators, not actors. Clearly, he has found that sweet spot that brings you into the show and keeps you there breathing heavily.

The band Savages offers “The Answer” as a tease single for their second album Adore Life that came out on January 22, 2016. The band issued to following statement about the video with its October release:

We’ve observed our audience all around the world and noticed that something is happening. People want to be pushed to do good, or to be good, or just to feel good. We wanted a very intense video that felt like banging your head against the wall, focusing on our audience: a portrait of our crowd, an homage to music lovers and the good people who are coming to gigs and shouting their lungs out, or just smiling at the back. We were touched by them every night, and wanted to get their message out there: Loud guitar music is still alive and still connects people.