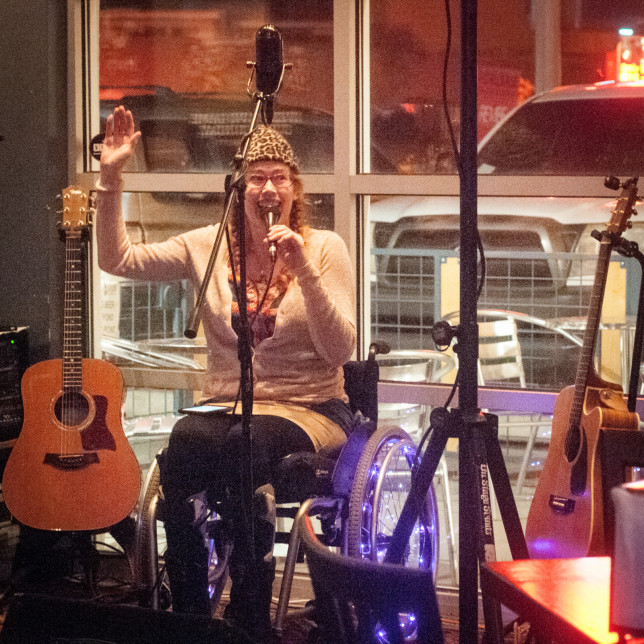 It’s a good day when you make your therapist laugh, and especially so when her name is Hope. I have an incomplete spinal cord injury, with a severe pain syndrome from chest level down and am once again typing on my hospital bed in the living room. Paradoxically, there is no connection between my brain and my skin receptors, so I need to check my feet daily for sores and ulcers as even a small cut or blister will go unnoticed.

In July 2015, my orthopedic spine doc confirmed what I’d suspected for a while: This nerve pain will never go away, and the adhesive arachnoiditis may get worse. “So I will need to live a quiet and calm life?” I said, already knowing the answer. I went home that day, crying from anguish as I couldn’t accept my fate. I grabbed an old, empty notebook and started writing. Pages and pages finally came alive, exploding with humor, and a little sadness. But mostly humor.

When he laughed, I confided my ridiculous idea of doing stand-up.

I had grown up with a healthy respect for the Monty Python collective and as a European, loved the Pink Panther movies. As our TV watching hours were severely limited (we maxed out at half an hour a day with only two channels to choose from), nothing created more cohesion than watching “Soap” together. Melancholy was so clearly part of comedic fabric, like a woven tapestry. When I saw Being There I cried. And cringed when Shirley MacLaine made love to a bed post.

As Peter Sellers stated: “To label any subject unsuitable for comedy is to admit defeat. Sometimes reality is so horrible we refuse to face it unless trapped by comedy.”

From the first time I picked up a mic, I perverted the truth and embellished how my handsome, Asian-American physician said: “Well, what you have is bone cancer-like pain. Except you don’t die.” In reality, he told me that it was a horrifying, painful condition called lumbo-sacral adhesive arachnoiditis. Although he did say it with tears in his eyes. That’s also how I knew how serious it was, yet I wanted nothing more than to make my notebook come alive in front of the microphone.

I told Marty Adamsmith, the only comedian I knew in Albuquerque, about my observation, and that comedy was the last vestige before total collapse of civilization. And when he laughed, I confided my ridiculous idea of doing stand-up. I still didn’t go until I recalled that my friends’ open mic at the Draft Station had a couch and I taught myself to not feel self-conscious about lounging horizontally, laying underneath a blanket. 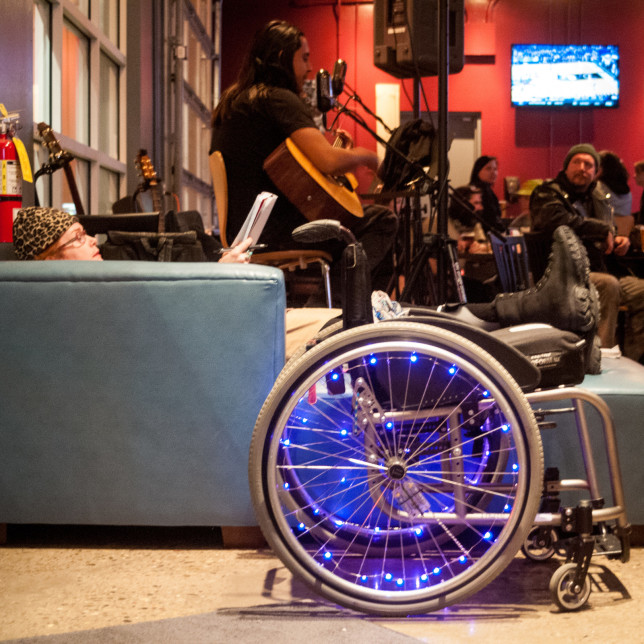 Keeping myself upright, even in the wheelchair, wasn’t easy as I couldn’t focus on my delivery, but it was too late. I was hooked and was soon asked to join other comedians at their Back Alley comedians-only open mic. While I was writing every day and doing open mics twice a week, life went on for my family overseas.

My father’s Alzheimer’s worsened, and for better or for worse, selfishly, I needed my dad to recognize me one last time. Sitting on the tailbone for 18 hours again worsened the nerve pain, and I was diagnosed with central pain syndrome, on top of the adhesive arachnoiditis and my old cauda equina spinal cord injury. Three weeks later I was hospitalized at Lovelace Rehabilitation. I kept writing comedy though, even if I couldn’t go to open mics for 12 weeks. I was discharged in December, and having no family in the States, my 15-year-old cat Pepper happily awaited my arrival. Well, she died a week later, after a nasal scope showed inoperable cancer.

One day, I will have to morph my material from comedy into storytelling.

That night, I did an outrageous 15 minutes on terrorists, Steven Seagal and weed. I had a setback and was bedridden for two full weeks, then finally made it to Back Alley again. The comedian community welcomed me back fiercely, as if I had never left. My biggest mistake in these early days was, paradoxically, writing 343 jokes. I’ve always been a numbers person, so I failed, at first, to see how it’s about improving on delivery and growing into stand-up.

Comedy was a way to my heart, a way for me to connect with the world. Comedy is the only art form that allowed me to become an adult, to set free that bullied and broken child within, in this body that is at best, a joke of such monumental proportions that one day, I will have to morph my material from comedy into storytelling. My next step up in is a power wheelchair, and once again I am worried about dating, and my ability to keep coming to open mics.

I don’t believe in happy endings. However, typing from this hospital bed, I have a new roommate, a comedian/poet; I now have a personal caregiver; and my mom and dad will visit after her cataract surgery. I have made the best friends anyone can have. I had sex for the first time in seven years, thankfully before my roommate moved in as we managed to use the entire 800 square feet. I am surrounded by art, brilliant painters, musicians and comedians, by a community that has its ups and downs, that is imperfect, like we all are. It all comes down to connecting with humanity in a way that makes sense, that fits each of us individually, so we are indeed parts of a greater whole. 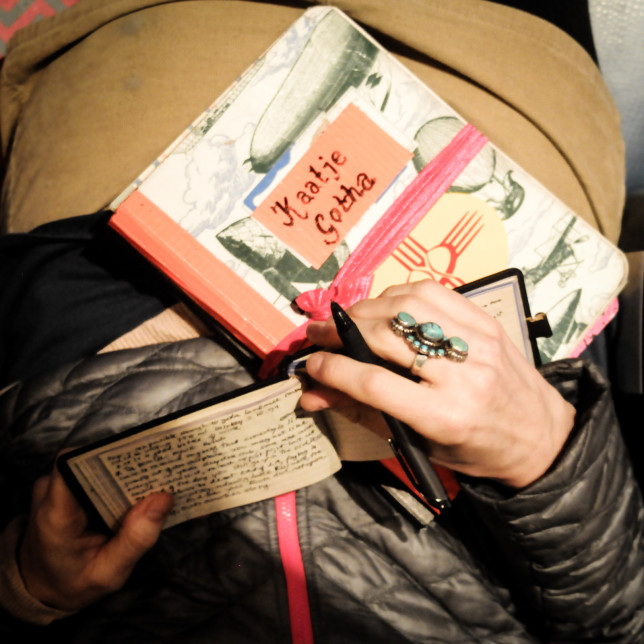 I’m a comedian, writer and retired Physician Assistant. In 2015 I was diagnosed with a second type of SCI (spinal cord injury), on top of an old cauda equina syndrome. Although it’s been years since my parachute didn’t open, this severe, subsequent injury is the real challenge. Everyday I intentionally look for happiness and creativity, so that lumbosacral arachnoiditis and T4 central pain syndrome do not determine the quality of my life.

I’m primarily bedbound, and use a few precious hours each week for comedy open mics. Unfortunately I can’t sit upright for more than 20 minutes so I prefer venues with couches. My second memoir, a podcast at Duel Brewing, and my website all originate from my hospital bed. Comedy, however, is special; it’s the way I connected my heart to community. Lastly, I’m blessed with exceptional support from friends, family overseas and a wonderful personal caregiver.

“To label any subject unsuitable for comedy is to admit defeat. Sometimes reality is so horrible we refuse to face it unless trapped by comedy,” according to the legendary Peter Sellers.

View all posts by Kaatje Gotcha →