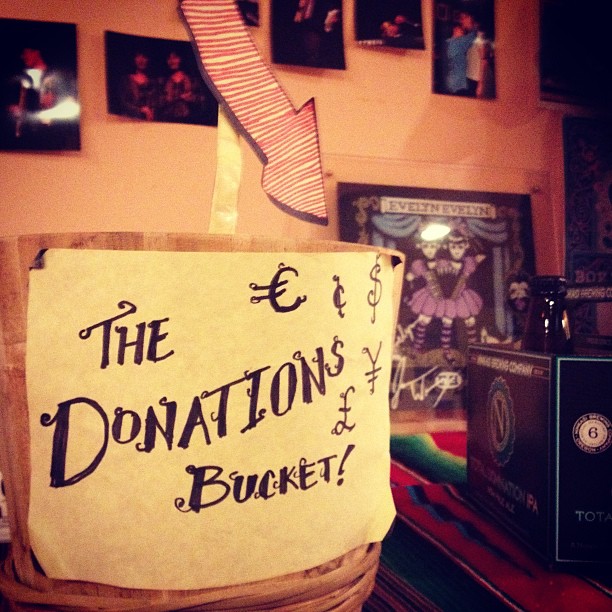 Welcome back to the House Show Manifesto, wherein I talk about the best practices if you want to host or perform a house concert in this futuristic day and age. We live in an exciting world, with the Internet bringing independent musicians new opportunities to exploit and new hurdles to overcome. What a time to be alive…? Actually, I’m not sure if it is. I’ll get back to you on that.

Let’s get down to brass tacks. Today, we’re gonna talk about the brassiest tacks in the business.

Talk about the money in advance.

If you’re a host or artist and you just want to have a house show for fun and not accept any money at all, that’s great and fine! This particular article may not be relevant to your current interests, but you might still learn something new. If, on the other hand, you are an artist who is trying to make a living off of your work, or a host who wants to support their artist of choice towards that same goal, then read on!

There are two basic schools of thought about how to make money from a house show: Either you take a set amount of money at the door, like a traditional venue, or you accept donations throughout the course of the evening.

If you choose a donation system, the artist is definitely subjected to more uncertainty regarding how much money they’re going to walk away with, but if it’s done right, donations can bring in a lot more, because people are allowed to choose what they contribute. This system also helps foster a sense of community among the audience; people will feel like they’re at a friendly gathering rather than a Commercial Art Experience. It’s hard to feel communal when there’s a restriction that turns poorer folk away. Additionally, the artist will have a better chance of meeting other artists and writers (who are, let’s be honest, likely to be relatively broke). Meeting other creative workers helps an artist build a support network in the region, and there’s quite a lot of value in that, even if more money could have been made with an entry fee.

If you choose an entry fee system, you are going put up a paywall that some people simply won’t be able to afford. You’ll be deterring certain potential audience members from attending (students, artists, writers, and other low-income members of society). The compulsory transaction will make it feel like less of a community event and more of a Commercial Art Experience (which is not necessarily a bad thing, it’s just something to consider). But this system does give the artist an all-too-rare feeling of comfort, knowing roughly how much money they’re going to make by the end of the night. This helps with planning future travel, recording sessions and other projects. There’s a lot of value in that, too.

Regardless of which system you chose, the host has the responsibility to make sure the artist gets compensated at the end of the night. If you’re the host and you’re taking donations, make sure to remind the audience about it. Remind them loudly and remind them multiple times. The artist should do this, too, a couple of times during the performance.

Can this be awkward? Sometimes. But a little bit of awkwardness is worth taking the risk for. Artists deserve to be paid for their work! So pass the bucket or hat or jar or whatever vessel you’re using to collect donations. Pass it to through the audience, and let everyone have an opportunity to give what they are able to give.

If you chose to charge an entry fee, make sure that there is someone in charge of collecting it at the door. If you’re the host, you might offer complimentary refreshments to the guests, and to the artist. Food and drink help people relax and interact with one another. Something about the mere presence of food and drink shatters the walls that stand between people and interaction.

It’s difficult to consistently tour without a reliable income.

For the donation system, a potluck might be more appropriate. Potlucks play into the donation system’s inherent sense of community and cultural exchange: Attendees will pay what they can, and bring what food they can. Some people can afford to bring a huge pot of soup or a bunch of pizza, while others can contribute a six-pack or a little plate of homemade cookies. No matter the size nor the generosity of the contribution, it should be accepted with grace and thanks.

I’ve had both systems work great for me, and both systems work terribly. I once played a packed punk house in Portland where a bunch of people listened and had a great time interacting with my performance, but because the host didn’t encourage tipping and because I didn’t assert it myself, I walked away with only a handful of dollars from merch sales. On the other hand, at a last-minute, informal performance at a record store in Eugene, I made much more than I had expected to, all because the owner took money at the door. It was one of the best shows on that tour!

Another thing to consider: Hosts, if you’re booking an artist of a certain degree of success, they might ask for a “guarantee,” or a certain amount of money they can rely on receiving from the show. To someone who doesn’t work in music, this might seem very presumptuous, but I assure you, it’s not; artists do not ask for guarantees because they’re greedy dragon-monsters, it’s because art and travel and promotion cost money. It’s difficult to consistently tour without a reliable income. And artists, if you’re at the level where you need to ask for a guarantee, don’t be afraid. Do what you gotta do to stay on the road.

In the US, we often feel that talking about income is coarse and rude, but it’s a critical part of ensuring workplace equality, and this goes for artists, too. There are times when we need to be open and frank about our needs and our responsibilities, and when you’re negotiating something like a house show, it is definitely one of those times.

This is the second part of a series about house concert etiquette. I know what you’re thinking: “Aaron! You call this series a manifesto and you have yet to write anything even remotely akin to that of a bearded revolutionary!” Well, rest easy, friends. My beard is coming in, and the collapse of the commercial recording industry as we know it is one of my chief interests. It’s bound to come up eventually!