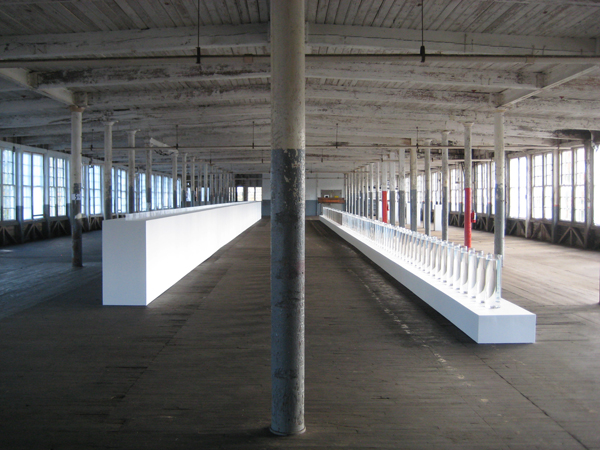 T-Minus 13! This post is part of an 18-post countdown to Amy Stacey Curtis’ next and final solo biennial in Maine mill space. After MEMORY, her upcoming biennial, she will have completed nine solo biennials over 18 years, with 81 massive interactive works, all told. She’s been unloading her process on Pyragraph as we countdown to MEMORY. Read the series here.

Maine’s my studio, in that only its mills hold my solo biennials’ installations. Eighty-one works will have been completed (assembled, build, made, finished) in these vast Maine structures, not only because the thousands of objects involved couldn’t exist as art within the walls of my one-of-our-bedrooms studio in our home, but also because my installations are literally incomplete without the audience who enters these historic spaces.

Each installation, in each mill, has a start I instigate and an end resolved by its participants. Outside the mill, my work is just stuff.

Our home, in Lyman, Maine, where I complete the larger pre-production toward these installations, is also my studio. In this smallish cape shared with my husband Bill and our two dogs, I use several rooms and spaces other than the built-for-a-bed room I call my studio.

I need places onsite to store my thousands of objects and tons of materials. And, I need places onsite roomier than my studio (kitchen, bathroom, basement, living room, bedroom, and garage) where I can do not-so-not-messy things like cut, sand, paint, etc. (yes, I’ve sometimes had to take my process into our bathroom).

My materials take up 25% of our total square footage, including our basement, garage, my actual studio, and one of the closets. 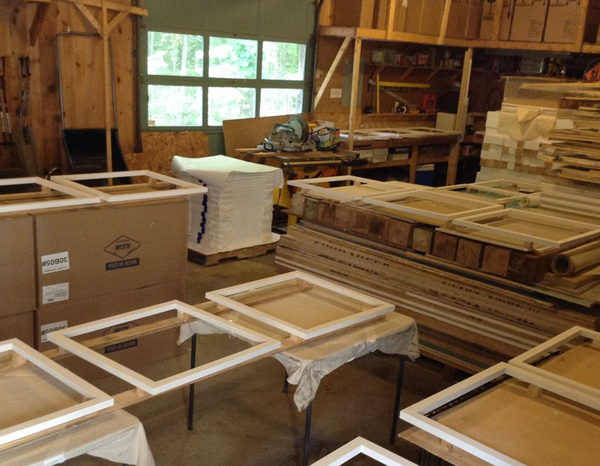 Before we found our home (our first and last house), just after my fourth solo biennial SOUND (2006), my materials took up ~70% of our much-smaller apartment, plus half a shed, and a space outside against the apartment, under tarps. I’m not a hoarder. Really.

I haven’t been keeping everything since 1998 from these nine installations per exhibit (to date I’ve done eight solo biennials; there’s just 1 exhibit left). There wouldn’t be space in our home to do the things housemates often do in their abodes.

After each solo biennial, I spend my 22nd month of its 22-month process making space for the next biennial’s work. I recycle, return, resell as many materials as possible, keeping elements for installations I know I’ll repeat, or costly things I know I’ll use another way. I’ve recycled enough drywall to finish three homes.

The bedroom on the left at the top of our stairs is also my studio. This is where I take curators who visit, after I’ve shown them the mountains of materials in our garage and basement.

It’s funny to me when some curators make contact to see “finished work” in my studio. Unless their timing is right and I happen to be working on the series of drawings I do to support my installations, there’s nothing to see at my studio but my process.

Quite a few visitors are shocked to see I make what I make from such a small space. They expect, at the very least, an airplane hanger.

I like to be contained while doing the work I do in my studio-studio. I prefer a small space. And, I keep it as uncluttered and neat as possible. This is where I think, write, draw, and do the tighter, cleaner kind of pre-production for my installations.

My desktop in my there’s-no-bed-in-this-bedroom studio, is also my studio (my laptop, my studio away from home). 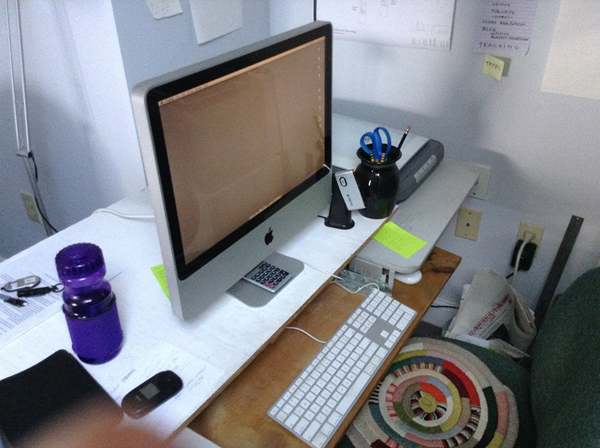 I would say ~80% of my making—before I start installing—happens on my computer. I’ve considered all this administration (conceptualization, problem solving, grant writing, mill securing, email responding, proposal crafting, mailing-list maintaining, etc.) to be just as much part of my art as the art itself. Without it, my work wouldn’t happen.

And in a big way, my brain, contained in my studio, in our home, in the state of Maine, is also my studio.

Since the start of this 18-year plan, my noggin has been full, utterly consumed. I make a point to leave my not-a-bedroom studio, to leave our home, to get out and about in our state, to take a break from the can’t-turn-them-off details always stored but bouncing in my head. Although I mostly visit people I like, outside my studios, to hear about things going on in their homes, I also like to go to other artists’ studios, inside their homes, some inside other mills, to hear about what’s stored and bouncing in their heads.

Between each 22-month solo-biennial process, I’ve taken a two-month between-biennial-cycle rest. This is when I empty my brain, make room for the next biennial’s brain matter. But it’s not completely empty. I leave the shelves, the same ones I’ve used for each previous exhibit, the framework, the plan. So I don’t have to re-figure out how to pull-off a massive exhibit.

Whatever I bring into these spaces, once I’ve freed up their cubic feet, I am hoping it’s much less. I want to leave space for more of the kinds of stuff housemates often do in their abodes. I want to disassemble the shelves in my brain to allow for more of everything from unplanned idea to the peace and quiet that might happen while walking my dogs, driving unknown roads, and sitting outside on my porch to watch trees sway.